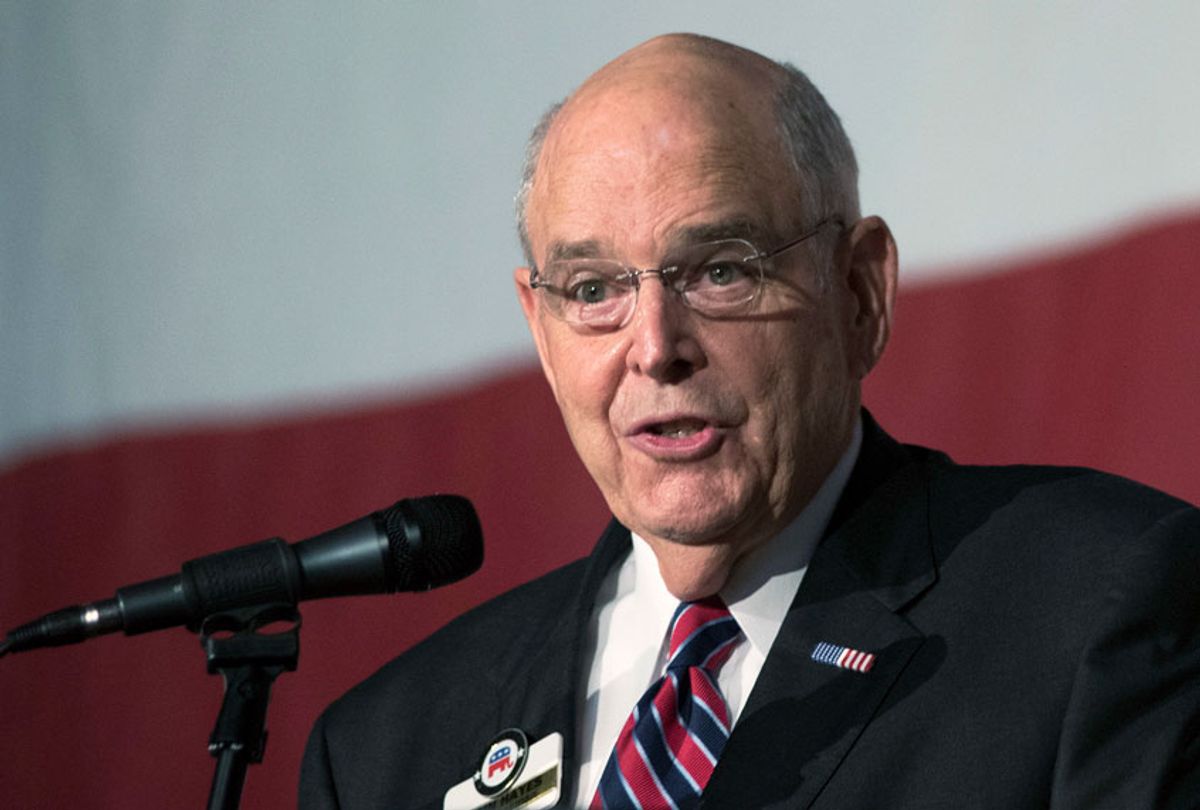 North Carolina Republican Party chairman Robin Hayes and three of his associates were charged with federal bribery and fraud charges, according to an indictment unsealed this week.

The indictment alleges that the four men conspired to bribe North Carolina Insurance Commissioner Mike Causey, a Republican who is apparently cooperating with investigators and has not been charged. According to prosecutors, the four men gave hundreds of thousands of dollars in campaign funds after asking Causey to fire a deputy commissioner tasked with regulating Lindberg’s company in exchange for the donations. Court documents say Causey was offered at least $1.5 million. Causey reported the bribery attempt to investigators.

"The indictment unsealed today outlines a brazen bribery scheme in which Greg Lindberg and his co-conspirators allegedly offered hundreds of thousands of dollars in campaign contributions in exchange for official action that would benefit Lindberg's business interests," said Brian Benczkowski, the assistant attorney general of the Justice Department's criminal division.

“These men crossed the line from fund-raising to felonies when they devised a plan to use their connections to a political party to attempt to influence the operations and policies of the North Carolina Department of Insurance,” added FBI special agent in charge John Strong.

Prosecutors say Lindberg complained to Causey in February 2018 that a deputy commissioner was “deliberately and intentionally and maliciously hurting my reputation with other regulators.”

At a meeting the following month at a local airport, Causey asked Lindberg, “What’s in it for me?” Prosecutors say Lindberg promised him “millions of dollars in campaign contributions” for his re-election bid.

The indictment also refers to a “Public Official A.” Politico reported that individual was Rep. Mark Walker, R-N.C.

According to the indictment, a Walker-controlled political committee received $150,000 from Lindberg at the same time that the executive asked him to pressure Causey into firing his deputy.

“Just between the 3 of us … [Public Official A] has already made two calls on our behalf and is trying to help us move the ball forward,” one of Lindberg’s associates told him via email, according to he indictment. “I was also told that the $150,000 will be going to [Public Official A].”

FEC records show that Lindberg donated $150,000 to the Mark Walker Victory Committee on Feb. 17, 2018. Lindberg was the first person to contribute to the committee, which was set up just four days earlier.

Walker denied any wrongdoing to Politico.

“We’re not even part of this investigation,” said Walker, who was not named or charged in the indictment. “I’m not going to get into [that with] you with any kind of details. Two of those are constituents of mine. They reach out to me; one of them is the county chairman.”

Though it's true that Walker is not named in the indictment, an associate texted Lindberg to say that “I have discussed our NCDOI matter with [Public Official A.] ... Excellent opportunity available for support here.”

Months later, one of Lindberg’s associates told Lindberg that he had lunch with Walker and “took the opportunity to talk with him about our issue with the DOI. … I think [Public Official A] got the message and will reach out to [the COMMISSIONER] over the weekend.”

A spokesperson for Walker told Politico that the congressman is cooperating with investigators.

Even if he is not indicted, Walker could face an investigation by the House Ethics Committee.

Hayes and Lindberg denied any wrongdoing through their attorneys.

The indictment comes after the North Carolina Republican Party spent months embroiled in an investigation that discovered rampant election fraud in the state's 9th congressional district. The North Carolina State Board of Elections ordered a new election when Republican Mark Harris, who led the intial vote count by about 900 votes, conceded that a new race was necessary after his own son -- a federal prosecutor -- testified that he tried to convince his father not to hire convicted ex-felon Leslie McCrae Dowless to run an absentee ballot operation for him because of Dowless' shady track record. Dowless and several of his associates have since been indicted after it was revealed that he hired people to illegally collect unfilled absentee mail-in ballots and fill them out with votes for Republicans.