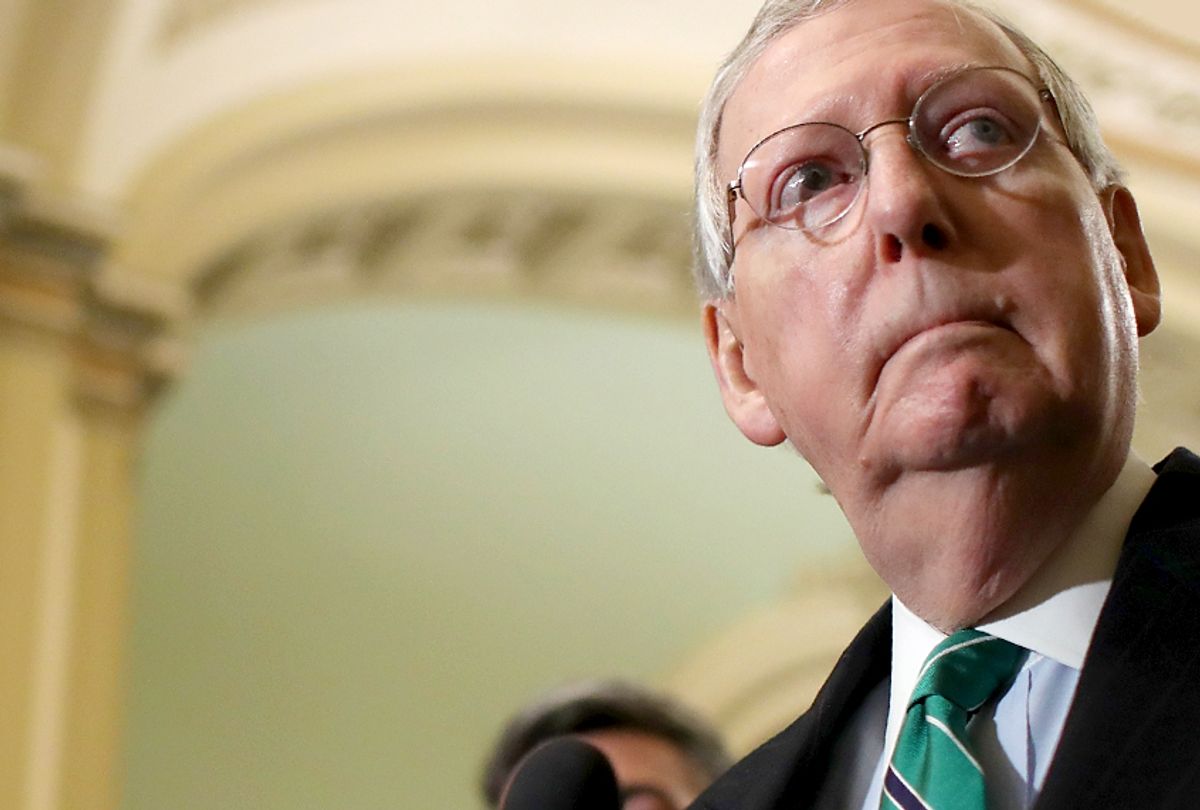 Last week, the North Carolina elections board called for a new election in the state’s 9th congressional district after Republican Mark Harris admitted during cross examination that a new race was needed. During the hearing, it was revealed that longtime Republican operative Leslie McCrae Dowless had hired workers to illegally collect absentee ballots and fill them out with votes for Republican candidates.

In his first comments on the massive ballot fraud uncovered in that race, McConnell blamed Democrats on the Senate floor Tuesday.

“For years and years, every Republican who dared to call for commonsense safeguards for Americans’ ballots was demonized by Democrats and their allies,” McConnell said.

“We were hit with left-wing talking points insisting voter fraud wasn’t real! Never happens, they said!” McConnell continued. “Well, that fraud just didn’t happen if modest efforts to ensure that voters are who they say they are and are voting in the proper place were really some sinister right-wing plot to prevent people from voting.”

“So now you might expect, now that an incident of very real voter fraud has become national news and the Republican candidate seems — seems — to have benefited, these long-standing Democratic talking points have been really quiet,” he added.

To be clear, there were no reports of in-person voter fraud in the North Carolina congressional race. Harris’ campaign was single-handedly responsible for a large scale election fraud targeting absentee ballots.

Harris personally sought out Dowless to work for his campaign because the candidate Dowless had worked for in 2016, Todd Johnson, received 98 percent of the absentee-ballot vote in his home county in the 2016 Republican primary.

Harris’ son, a federal prosecutor, testified that he had warned his father that Dowless had likely been committing felonies by illegally collecting ballots from voters. His father apparently ignored the advice.

After calling for a new election, Harris announced that he will not run again.

“It is my hope that in the upcoming primary, a solid conservative leader will emerge to articulate the critical issues that face our nation,” said Harris, who is an evangelical pastor in Charlotte.

Along with perpetrating a blatant fraud scheme, witnesses testified that Dowless instructed them to lie to investigators. Four accomplices -- Caitlyn Croom, Matthew Monroe Mathis, Tonia Gordon and Rebecca Thompson -- were charged with conspiracy to obstruct justice and possession of absentee ballots. Mathis was also charged with falsely signing the voter certification on an absentee ballot.

According to the indictment, Dowless “unlawfully, willfully, and feloniously did, with deceit and intent to defraud, obstruct public and legal justice” by submitting fraudulent votes for his candidate.

Dowless and his accomplices were indicted for forging at least three ballots, but that was likely the tip of the iceberg. Wake County District Attorney Lorrin Freeman told CNN last year that more than 1,000 absentee ballots may have been altered or destroyed in the 2018 election.