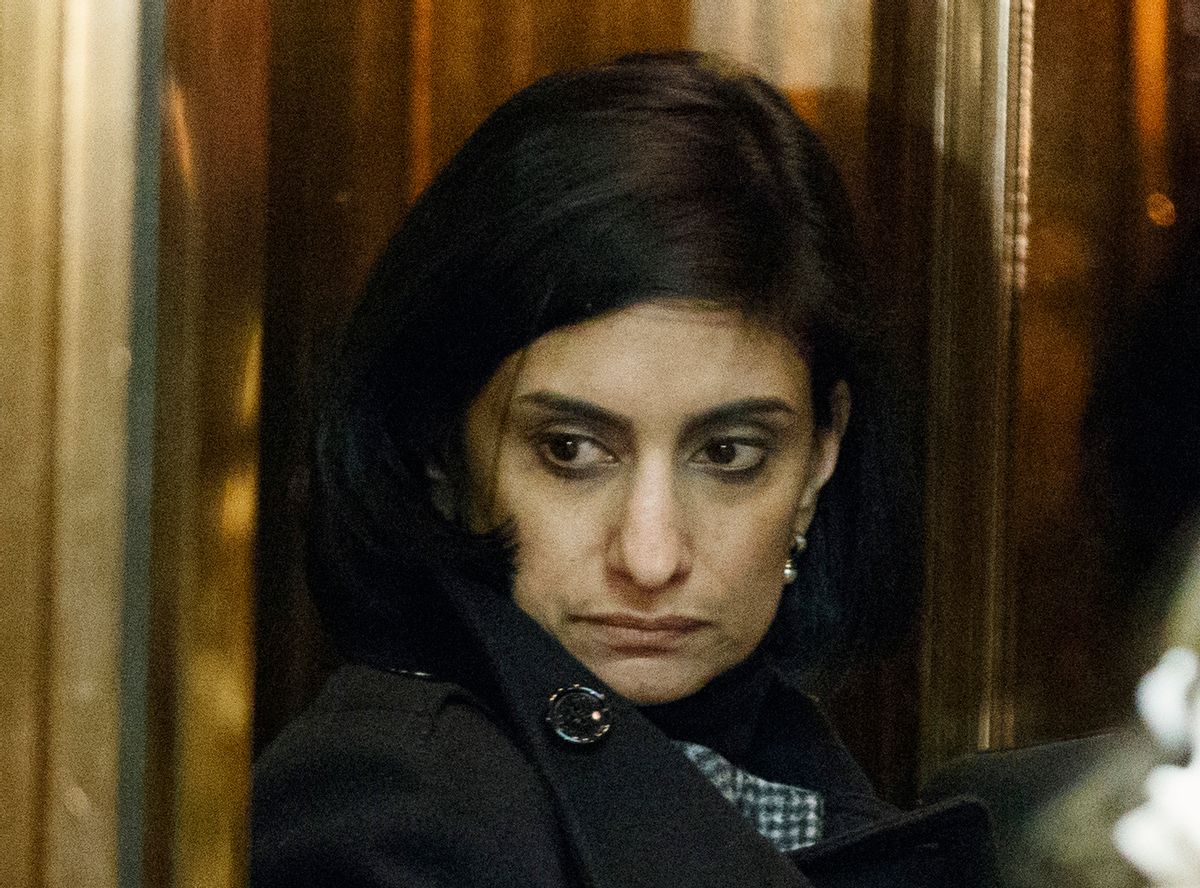 FILE - In this Jan. 10, 2017 file photo, Seema Verma, left, nominee for administrator of the Centers for Medicare and Medicaid Services, gets on an elevator in the lobby of Trump Tower in New York. Verma was confirmed by the Senate on March 13. (AP Photo/Evan Vucci File) (AP)
--

From Tom Price’s $1 million in private plane travel to Scott Pruitt’s attempt to get his wife a Chick-fil-A franchise, officials in the Trump administration appear to be having a competition with each other to see who can be the most nakedly corrupt. Seema Verma, administrator of the Centers for Medicare and Medicaid Services (CMS), is a top contender. Price and Pruitt are two of the many Trump officials who have already resigned in disgrace. It’s past time for Verma to do the same.

Last week, the depths of Verma’s corruption were exposed when an investigative report revealed that she spent millions of taxpayer dollars on hiring Republican communications consultants to “bolster her public profile.” Verma’s agency already has around 24 in-house communications staff, but apparently that wasn’t enough for her. She saw the opportunity to funnel huge sums of money to her political buddies, and eagerly took it.

Verma does have good reason to be concerned about her public image. Her tenure running Medicare and Medicaid has been marked by attacks on both programs and their beneficiaries. Since these programs are extremely popular, attacking them is a great way to get a terrible reputation.

Her assault on Medicaid has been relentless. Before joining the Trump administration, Verma was the head of SVC Inc., a consulting firm that worked on making state Medicaid programs as cruel and stingy as possible.

When Mike Pence was governor of Indiana, he paid her firm $3.5 million of taxpayer money to design a Medicaid program that forced beneficiaries to pay premiums or go without needed care — defeating the entire purpose of Medicaid, which is specifically intended for people who can’t afford health care. Simultaneously, Verma’s firm was paid an additional $1.2 million by the Hewlett-Packard corporation, which had contracts to administer the Medicaid program she designed. Her work in Indiana, foreshadowing her tenure at CMS, was the height of both cruelty and corruption.

Once Trump put Verma in charge of CMS, she wasted no time in finding another way to attack Medicaid beneficiaries. Under her leadership, CMS has approved waivers from six Republican states allowing them to add so-called work requirements to Medicaid. In Arkansas alone, nearly 50,000 Americans could lose their health care due to these bureaucratic hurdles. Experts agree that this is a cruel and terrible policy, for reasons that should be obvious: It’s much more difficult to look for work when you are sick and going without treatment.

Verma’s attacks on Medicare are more subtle but no less dangerous. Under her leadership, CMS has been exhibiting blatant favoritism to Medicare Advantage plans, which are run by for-profit insurance corporations, over traditional Medicare. This is very dangerous for seniors because unlike traditional Medicare, Medicare Advantage plans restrict patients to a limited number of doctors and frequently and improperly deny people the care that they need. These plans lure seniors in with perks like gym memberships. It’s only when people become sick that their hidden downsides become evident.

Verma’s CMS has issued several regulations to push people toward Medicare Advantage, such as allowing these plans to cover services traditional Medicare is forbidden from covering. Further, the agency has been essentially acting as a marketing arm of Medicare Advantage plans, sending emails to Medicare beneficiaries pushing the plans with subject lines like “Get more benefits for your money.” Verma frequently cheerleads for Medicare Advantage in her public remarks, tweets, and op-eds.

The reason she loves Medicare Advantage so much could be that corruption loves company as much as misery. The corporate insurers that make up Medicare Advantage also like to just bilk the taxpayers, according to a recent whistleblower lawsuit exposing that the “amounts in question industrywide are mind-boggling: Some analysts estimate improper Medicare Advantage payments at $10 billion a year or more.”

Seema Verma’s attacks on Medicare and Medicaid, along with her close involvement in the Trump administration’s efforts to weaken and destroy the Affordable Care Act, have hurt Verma’s public image. Paying $3.5 million in taxpayer money to her Republican consultant friends has done nothing to help. If Verma wants to do something that’s actually popular with the public, the answer is simple: Resign.