There is still more evidence that women, ascendant in politics & the workplace, are scoring important economic wins 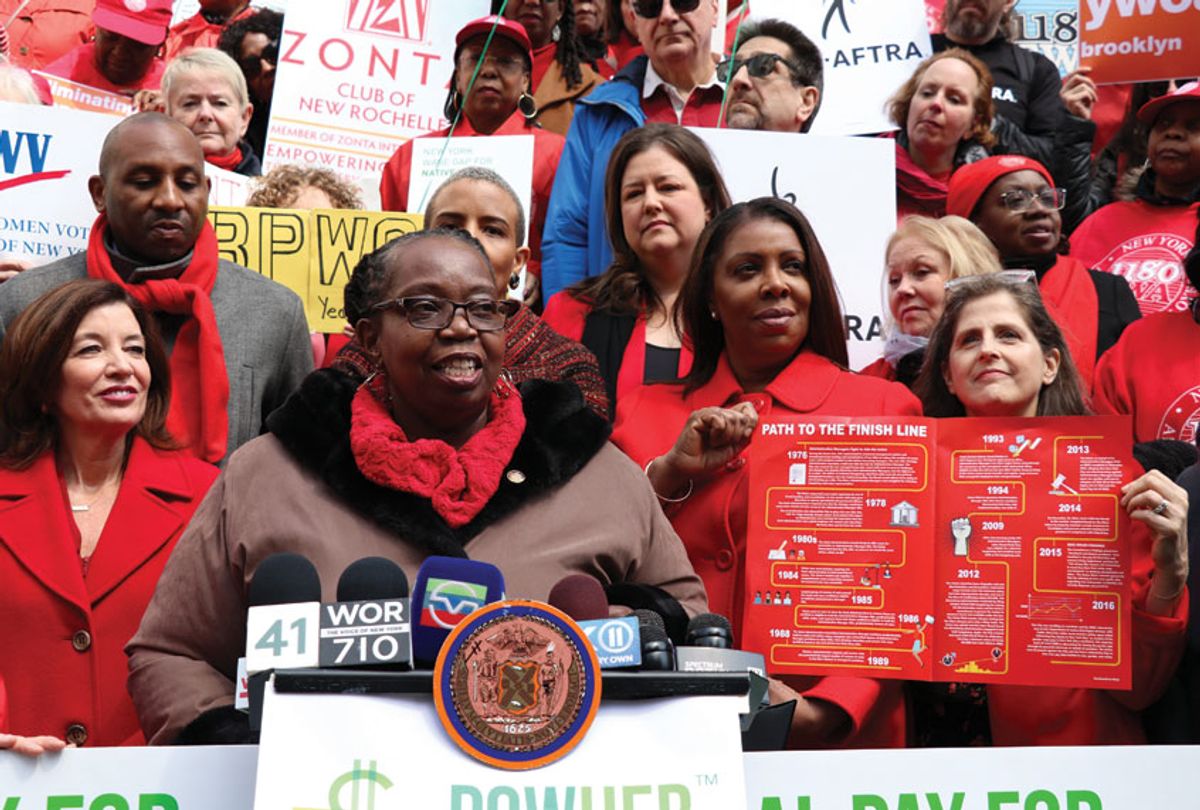 In the current news media climate it’s easy to lose touch with the core economic issues that actually define Americans’ daily lives. When you type in “poll top ten issues for 2020” what Google produces is the latest on the candidates and ranking them on how much money they have raised.

They really fixate on the horserace because that’s their money maker and as huge corporations that thrive on the current status quo they prefer a personality contest that’s cheaper to produce  and further inflates their profits. Even a cataclysm like climate change is lucky to break into the top five.

You rarely see pollsters include questions about how Americans feel about the enduring pay disparity between white men, white women, men of color and women of color for doing the same work.

If you are not a white guy and live every day of your working life with this disparity that you inherited from your parents your “legacy” is a pervasive economic injustice that you can trace back to America’s imperfect revolution.

When it comes to male pay the Pew Center found white men average $21 an hour while Black men get $15 and Hispanics $14.

When You Can’t Afford to Leave

When it comes to the home life, the vast gender-pay disparity casts a shadow over the choices millions of mothers have to make just to keep their kids fed and sheltered. It can mean enduring abusive and sometimes dangerous situations where they are putting up with an alcoholic or drug abusing spouse because he’s bringing home a paycheck they could never match.

In a capitalist society that values money above anything else, where the money goes defines who is in charge and who calls the shots. Women make-up nearly half of the workforce, outperform men in terms of academic achievement, yet according to the Institute for Women’s Policy Research make 80.5 cents for every dollar made by a man.

For women of color and women with children the gap opens up to a canyon that seems almost impossible to traverse.

According to IWPR, at the current glacial pace of progress, it will not be until 2059 for women to reach the promised land of pay parity. For Black women, it won’t be until 2119, while for their Hispanic sisters they won’t get there until 2224.

But looking around I sense a radical change in the air that indicates there’s a wave of female empowerment that’s more electric than a hashtag. It has the power to redeem the soul of this lost, alienated nation. Women are ascendant and they are just not going to be denied any longer.

All you have to do is look at the record shattering number of women elected in 2018 to the House of Representatives, a third of them for the first time. And even in the environs of New York State, where the state has been run for years by “three men in a room” — the Assembly Speaker, Senate Majority Leader and the Governor, after two of them were indicted and convicted for corruption there’s major change brewing.

Last week on the steps of New York City Hall hundreds of mostly female members of the Communications Workers of America Local 1180 rallied to celebrate a settlement they had reached with the City of New York for a generation of gender and race-based pay discrimination.

The $15 million settlement covers 1,600 active and retired Local 1180 members who were on the job from December of 2013 and 2017. The union’s big breakthrough came in April of 2015 the Federal EEOC found reasonable cause to believe that for years the city had engaged in wide spread discrimination against the women and people of color who held the civil service Administrative Manager title.

The finding covered every city agency. The EEOC found that there had been “structural and historic problems” in how the city treated the female and civil servants of color with the Administrative Manager title that resulted in their being paid “much less than their white male counterparts.’”

As part of the Local’s successful brief, it documented that in 1978, when the Administrative Manager title was  mostly held by white males the job paid the equivalent of $92,000 a year, but in the years that followed when the women of Local 1180 started holding the same title the salary dropped to $53,000. The EECO estimated the disparity cost the women close to a $250 million in over a decade.

“Local 1180’s path to the finish line started more than two decades ago,” CWA Local 1180 President Gloria Middleton told a cheering crowd of union members and their supporters on the steps of City Hall on April 2. “It’s been a long path —a complicated path—a frustrating path. But today we can finally say it’s been a successful path.”

Standing next to Middleton was the newly elected New York State Attorney General Letitia James, who had been New York City Public Advocate.

“What a difference a year makes,” City Council Majority Leader Laurie Cumbo told the crowd. “When I look around all of the dynamic changes with our then Public Advocate become the New York State Attorney General [Letitia James] — when I see Crystal Peoples-Stokes, the Majority Leader of the Assembly — when I see Andrea Stewart Cousins [Senate Majority Leader] who has broken the barriers there — we now have three African-American women who are now majority leaders at the city and state level — positions that were previously held by white men.”

She continued, “We have broken the barrier of three men in a room . . . . I am so proud to be part of this herstory that we remake every single day. We knew, and always new these wage disparities were present.”

Rose Reeves is an Administrative Manager for Housing Preservation and Development with 36 years on the job. After the City Hall rally Ms. Reeves was somewhat philosophical about the settlement. Ms. Reeves calculates that over the arc of her long tenure she had lost out hundreds of thousands of dollars in potential lifetime earnings.

“I want to retire in three to four years,” she said. “So, before I retire we will hopefully see a change.” She said she was consoled by the knowledge that because of the union’s multi-year legal battle for pay equity “we are paying it forward” for all the women that come after the women gathered at City Hall and the thousands more they represent.

What’s really disconcerting is that the Federal Equal Pay Act has been on the books since 1963. A half-century later, where are we? Consider the research done by the University of Illinois that documents that single mothers make two-thirds of what single fathers make.

For too many American families headed by women, every day is like trying to run up the down escalator.

“There’s a societal assumption that mothers will be less reliable” because their first priority will be their children, according to Dr. Harriet Fraad, a family therapist who helps families cope with the impact of economic dislocation.

And Fraad observes that this rigid economic caste system, that helps keep millions of women and their children in poverty, comes in a country without any external societal support for families in general.

“Every other western democracy except for the U.S. supports families with family leave, childcare, after school programs and summer programs,” she says. “As a consequence, 75 percent of our school age children come home to an empty house and that happens to be the time of day that we see the highest percentage of crimes against children and of children committing crimes.”

For “moderates” like former Vice-President Joe Biden they just don’t get the fierce urgency of now on issues like pay disparity that the radical left embodies in firebrands like Rep. Alexandria Ocasio-Cortez and Senators Bernie Sanders and Elizabeth Warren.

They speak the same language but with a dialect of passion and urgency because they understand the grievance. They know in their bones the wasting of a generation that comes when these injustices are carried forward decade after decade and America is robbed of what it might yet be.

All Salon The Economy & Innovation