What campus free speech? Arizona case shows how far the right will go to stifle dissent 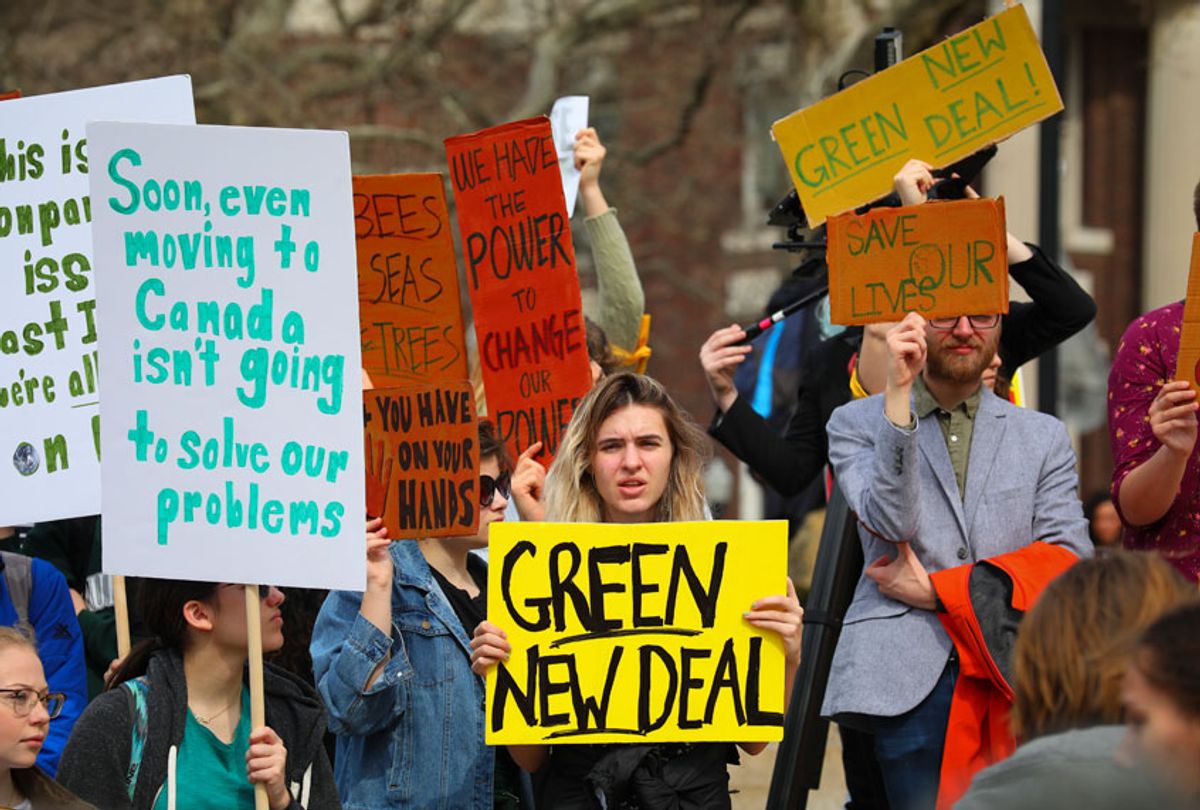 Students gather with signs for a Climate Strike rally on the campus of Columbia University, Friday March 15, 2019, in New York. (AP/Bebeto Matthews)
--

So much for the trope that universities are a bastion of free speech -- or of liberal "political correctness," for that matter.

In 2018, four Republican-controlled state governments pushed through legislation that sought to deploy law enforcement to force a fallacious "balance" into campus debates and speech. Pushed by ultraconservative groups like the Goldwater Institute and big-money Republican donors like the Mercer family, under the guise of protecting the rights of controversial conservative speakers, the new laws actually seek to punish dissent.

Now the president of the University of Arizona is defending his school’s decision to seek criminal charges against three students who protested the presence of Border Patrol agents on campus. No violence took place during the March 19 demonstration, yet the school concluded that the students broke Arizona law when they publicly “harassed” the agents, a Class 1 misdemeanor that could result in up to six months of jail time.

“From the letter of the law, I think the chief obviously deliberated about this, in a very tough situation, and decided that the actions of the students did disrupt the presentation that was being made,” university president Robert Robbins told the Arizona Republic after the charges were made public on Thursday.

20-year-old Denisse Moreno Melchor, 22-year-old Mariel Alexandra Bustamante and 27-year-old Marianna Ariel Coles-Curtis were finally charged this week after video of their demonstration was widely shared by conservative outlets like Judicial Watch and Breitbart as proof that college campuses are hotbeds of radical left-wing thought that stifles free speech. Art Del Cueto, a border patrol union official, publicly called for the students to be investigated. At least so far, citizens cannot legally infringe upon another's free speech. So Arizona officials instead charged the students with interfering with the peaceful conduct of an educational institution and threatening and intimidating the agents.

In a video that went viral in conservative circles, two agents can be seen giving a presentation inside a classroom while people in the hallway call them “murderers” and “an extension of the KKK.” Students then chant “murder patrol” as the agents leave campus. According to the New York Times, on the same day these border officials were on the university’s Tucson campus, a local family was arrested and detained just a few miles away.

Robbins said he agreed with the decision to criminally charge the two students because “free speech doesn’t give one the right to disrupt an ongoing presentation in a classroom.” Free speech advocates, however, strongly disagree.

"Filing criminal charges against students for campus speech that may be protected by the First Amendment will chill protected student speech," the free speech advocacy group FIRE said in a statement. "Students will rationally decide to self-censor rather than risk the possibility of criminal charges.”

The Constitution guarantees the right to freedom of speech untrammeled by government interference. It emphatically does not guarantee the right to an agreeable audience or a  "respectful" hearing, especially in a public forum like a state university. Heckling, jeering, booing and similar "disruptive" acts are all constitutionally protected freedom of speech. The government is allowed to place reasonable time, place and manner restrictions on protests, but the possibility of jail time for peaceful protest certainly appears egregious. Furthermore, while students can be punished for disruptive behavior, such punishment cannot be based on the content of their message. It is clear here that the objection was to the content of the message of the protesters. While traditionalists may be unnerved by the controversial tactic known as "de-platforming" -- which amounts to drowning out an objectionable message, or denying it an audience -- it is without question a valid form of protest and an exercise of free speech.

As this case demonstrates, right-wing astroturfing about threats to free speech on college campuses is nothing but projection. In a recent essay for Salon, journalist and Yale professor Jim Sleeper aptly  described it as “a lavishly-funded, brilliantly orchestrated, politically poisonous lie about college students and their deans that riveted millions of Americans during the run-up to the 2016 election.”

As future Supreme Court Justice Lewis Powell's infamous 1972 memo dictated, propagating this lie is a centerpiece of the right-wing strategy to dismantle civil institutions to allow for corporate dominance. While college Republicans and elite liberals alike bemoan the rise of “social justice warriors” and “safe spaces,” modern conservatism has now become a sort of "protected class" on college campuses and dissenting voices have been criminalized.

“I’m always using my voice. That’s a must as a Latina who has citizenship,” Bustamante told the Guardian this week. She said she has received death threats and a visit from law enforcement at her home following her protest of the Border Patrol. “I never thought I’d face repercussions for doing so.”

The supposed free speech warriors who have fanned the flames of moral panic over perceived threats to campus discourse will likely have little to say now that the arm of the law has been used to silence student protests. For his part, Robbins, the university president, released a more cautious second letter -- following a first one that praised the Border Patrol's presence on campus -- confirming that he was aware of threats issued against people on "both sides" of the issue. Perhaps he didn't mean to echo President Trump's rhetoric after the Charlottesville riots of 2017, but the resonance is unmistakable.