Pete Buttigieg tells Mike Pence that if he has a problem with homosexuality, his problem is with God

Mayor Pete to ultra-devout veep: If you have a problem with gay people, "Your quarrel, sir, is with my creator" 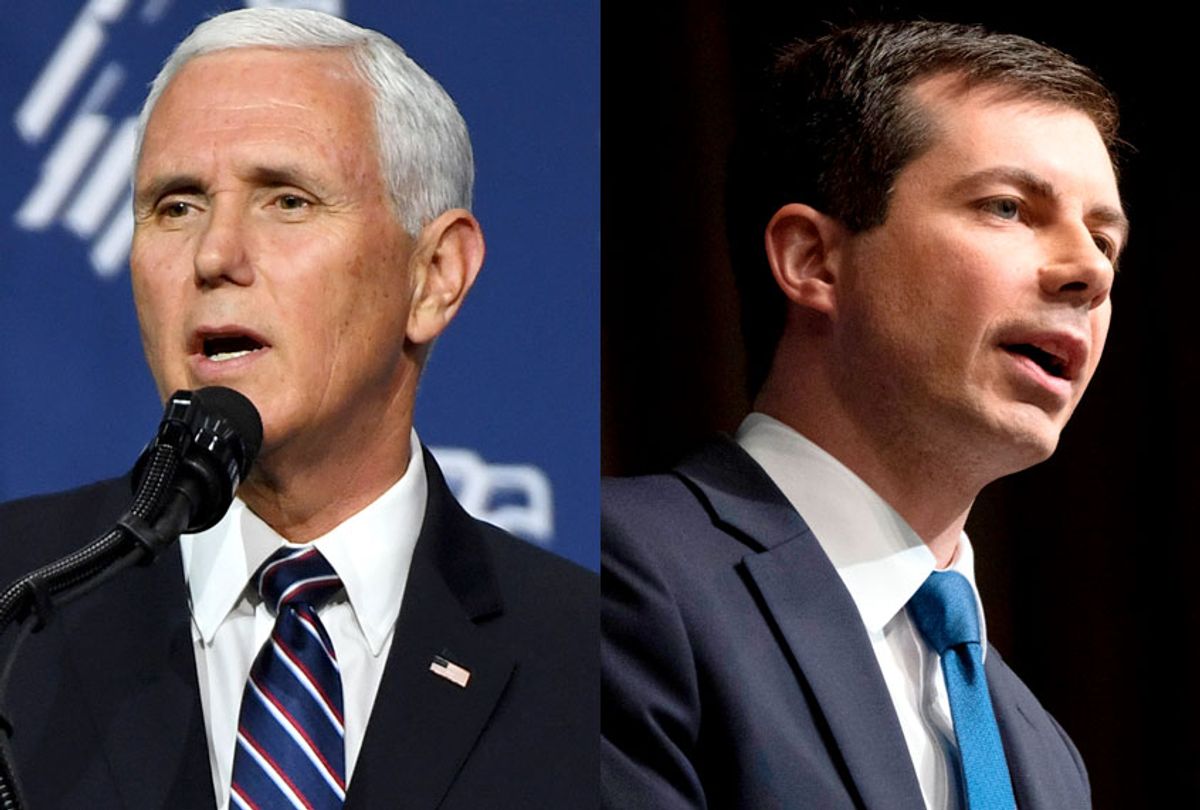 Mayor Pete Buttigieg of South Bend, Indiana, a surprise contender in the contest for the 2020 Democratic presidential nomination, told an LGBTQ Victory Fund event on Sunday that if Vice President Mike Pence dislikes his homosexuality, his problem is with God.

“It’s hard to face the truth that there were times in my life when, if you had shown me exactly what it was inside me that made me gay, I would have cut it out with a knife. If you had offered me a pill to make me straight, I would’ve swallowed it before you had time to give me a sip of water," Buttigieg told the packed audience, according to USA Today.

Buttigieg then told the audience that he is now grateful for being gay, since it allowed him to meet his husband Chasten, who helped make him a better person. He also argued that denying one's sexuality actually keeps one further away from God because it "is a message that puts you at war not only with yourself, but with your maker."

Then Buttigieg segued to talking about Pence, a man who built his political career on opposing gay rights as a congressman and governor in Indiana, both men's home state.

"That’s the thing that I wish the Mike Pences of the world would understand. That if you have a problem with who I am, your problem is not with me. Your quarrel, sir, is with my creator," Buttigieg said.

"I can’t believe that somebody that was caught writing hush money checks to adult film actresses is somebody they should be lifting up as the kind of person they want to be leading this nation," Buttigieg said on "Meet the Press" on Sunday.

Buttigieg's candid approach to discussing sensitive political issues has made him one of the biggest surprises in a packed Democratic field. A survey conducted last month by Emerson Polling found that 11 percent of likely Democratic caucus-goers in Iowa would support Buttigieg as their presidential nominee, behind former Vice President Joe Biden and Sen. Bernie Sanders. Spencer Emerson, director of the Emerson Poll, said in a statement that "the biggest surprise in this poll is Mayor Pete. Last week, we saw him inching up in our national poll, and now he’s in double digits in Iowa,. America is going to be asking, 'Who is Mayor Pete?'"