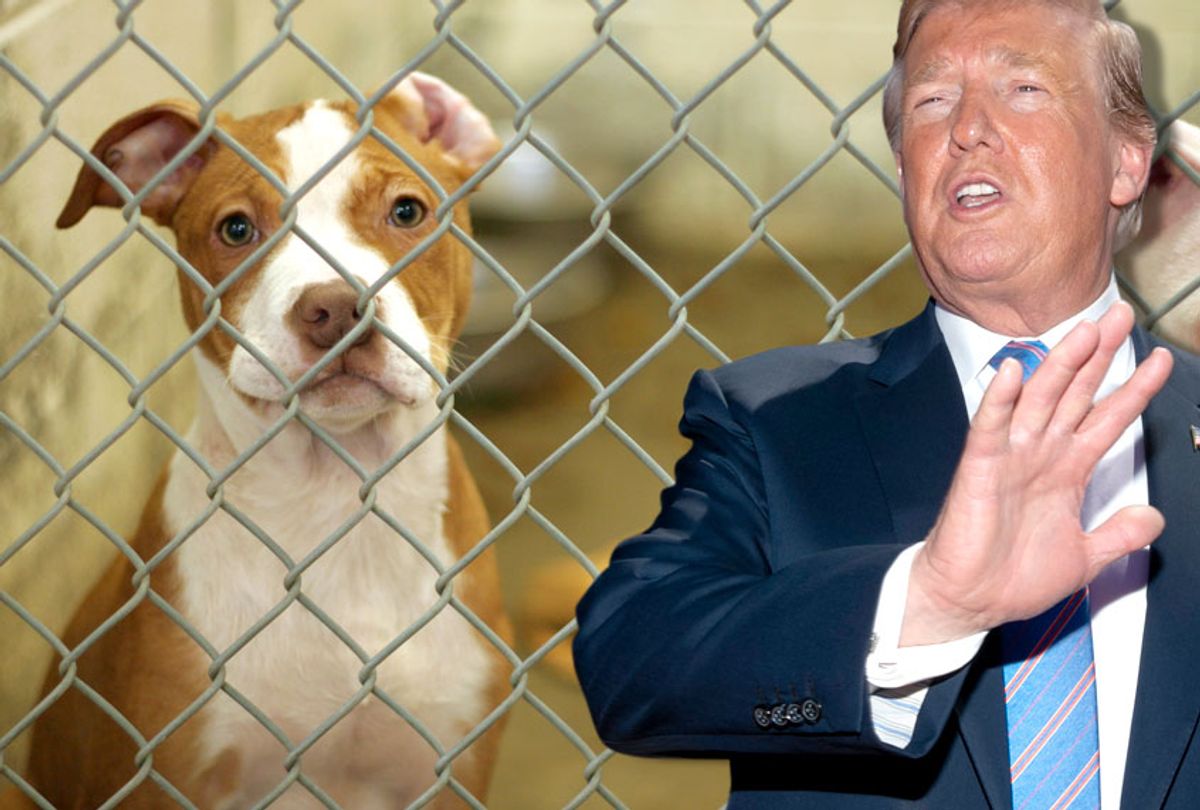 Donald Trump speaks as he visits a new section of the border wall with Mexico in Calexico, Calif., Friday April 5, 2019. (AP/Getty/Salon)
--

He’s at it again. The man who oversaw the infamous “zero tolerance” policy enacted last summer that separated children as young as two months old from their mothers and fathers has said he wants to get “tougher” on the border. On Sunday, he fired Kirstjen Nielsen, Secretary of the Department of Homeland Security (DHS), because she refused to violate federal laws and numerous court orders mandating how migrants seeking asylum in the United States are to be treated. DHS is already lacking one deputy secretary, and reports were out yesterday that Trump intends to fire the other acting deputy secretary so he can install a new acting secretary of Homeland Security who will carry out his illegal orders.

We know where the cruelty comes from. Despite polls that show Americans favor reasonable immigration reforms by a large majority, including a majority of Republicans, all of the “tougher” border policies come from conservatives, and Republicans in congress support them almost across the board. And we know what getting “tougher” looks like: there were reports this week that Trump wants to return to his disastrous, fascistic policy of separating migrant children from their parents. Before you start yelling about my use of the word “fascistic,” remember that the last time children were torn from their mothers’ arms on a wholesale basis was when they got off boxcars at places like Buchenwald, Auschwitz, and Dachau.

We’ve all seen the photographs of migrant children huddled under those ineffectual mylar “blankets” inside chain-link cages after they had been separated from their parents. More recently, we’ve seen the photos of migrants rounded up near El Paso, Texas, and corralled behind more chain-link fences, housed in military tents beneath a highway overpass. We’ve read the reports of quite literally thousands of migrant children shipped to shelters all over the United States where they were promptly lost in a bureaucratic maze of faulty record keeping, cobbled-together privately run children’s “welfare” shelters, and haphazard travel arrangements involving everything up to but not including railroad boxcars.

Last week, the Trump administration notified a federal court in Southern California that it could take up to two years to identify as many as 47,000 children who were separated from their families before Attorney General Jeff Sessions ordered his “zero tolerance” border policy in the spring of 2018. Evidence was produced in the court case that Trump administration officials began planning a family separation policy for migrants only weeks after taking office in 2017. The New York Times reported last week that the 47,000 children were “referred to the Office of Refugee Resettlement and subsequently discharged,” apparently making locating them more difficult. “In explaining the reason for such an arduous process, the government said United States Customs and Border Protection did not collect specific data on migrant family separations before April 2018,” the Times reported.

Let’s pause for a moment. The government of the United States of America wasn’t collecting any “specific” information at all as they engaged in physically removing babies, toddlers, young children and adolescents from their parents when they crossed the southern border and approached border patrol agents and turned themselves in seeking asylum. Think about that. Can you even imagine the desperation of those parents from Guatemala and El Salvador and Honduras, that they would travel for more than a thousand miles, often through dangerous territory in Mexico where they risked being robbed and even raped, and throw themselves on the mercy of the great American government seeking safety from the dangers they were fleeing?

They could watch news coverage of the so-called “immigration crisis” on Mexico’s border with the United States. They knew that the minute they surrendered to the Border Patrol, or even walked through a legal port of entry and applied for asylum, they would be put in what amounted to concentration camps. After April of 2018, they knew from reports on television and print media that their children would be taken away from them. And yet still they came.

What they could not have foretold was the criminal neglect with which the parents and their children would be treated by Donald Trump’s Department of Homeland Security. Kirstjen Nielsen spent most of the last year lying to one congressional committee after another, that the Trump administration never had a policy of family separation at the border, despite the fact that we now know it didn’t take a formal “policy” to rip 47,000 children away from their parents. There should be a special place in hell for this scheming, lying monster, and any corporation or non-profit who gives her a job when she resigns her post at DHS should be boycotted.

In Donald Trump’s America, we handle animals better than migrant children. Under the Animal Welfare Act of 1966, and the Food, Agriculture, Conservation and Trade Act of 1990, standards were set for the treatment of animals as they are housed, transported, and examined medically for potential disease and distress. The 1990 act required that a written certification of the background be provided to any “recipient” of the animal when transferred between facilities licensed to handle animals. Federal laws require the certification includes a description of the animal, a history of the animal’s transfers and records including veterinary treatments, and the law requires signatures from both the person doing the transfer and the recipient of the animal. Violations of the 1990 act are punishable by a $5,000 fine, and repeated violations can lead to the loss of license held by either party involved in the animal transfers.

None of these procedures were followed by the Department of Homeland Security when they separated children from their parents at the border in 2017 and 2018. DHS failed to keep accurate records of the names of the children and their parents. They didn’t keep accurate records of where the children were sent and where the parents were confined. They didn’t provide adequate health care to the children, and at least one child died because of neglect by DHS officials at the border. It would have taken a bare minimum of record keeping by DHS in order to follow the recent court order and locate the 47,000 children who are missing.

But they didn’t bother with the kind of records our laws require to be kept on animals. The provisions of the Animal Welfare Act and the 1990 trade act are followed every day by animal rescue shelters around the country which regularly remove cats and dogs from kill shelters and transport them to rescue shelters elsewhere. Airlines, trains, trucks, and private vehicles are used in the informal system of shelters that rescue animals and transport them around the country. The animals are identified, tagged, accompanied by extensive paperwork including veterinary records certifying that the animals have received proper medical care. These records follow the animals wherever they go. If a rescue shelter in New York State is scheduled to receive a dog or cat from Puerto Rico — quite a common occurrence after the devastation of Hurricane Maria — the New York shelter knows exactly how the animal will be transported, when it will arrive, which specific animal or animals are coming, where they are coming from, and who sent them. Signatures are required all along the way.

Rescue animals are not lost. Neither are children traveling on U.S. airlines as unaccompanied minors. All airlines have strict procedures which must be followed if a family is to send a minor child on a flight from one city to another. A parent or guardian on one end must accompany the minor through security to the gate and remain with the child until he or she gets on the plane. The child usually wears a lanyard holding an identification packet and his or her ticket. If there is a change of planes involved, the airline provides an official to take the child from one gate to the other. At the child’s destination, he or she must be met by the other parent or guardian and usually signed for before they can depart the airport.

Neither the animal transfer procedures or the unaccompanied minor airline procedures are complicated. They work. It’s very, very rare for cats or dogs or children moved around within the United States to be lost. In fact, it almost never happens, and when it does, the children or animals are quickly located because of the records kept on them.

This is what Donald Trump means by getting “tougher” on the border. Under the administration of Donald Trump, who grew up in privilege and was a millionaire before he was eight years old because of trusts set up by his father, migrant children will continue to be treated worse than the dogs and cats protected by not one, but two federal laws.

Kirstjen Nielsen and every other DHS employee who presided over the unconscionable separation of migrant children from their parents need to face a moral reckoning and public shaming that will ensure none of them ever draw another comfortable breath in their miserable, stinking lives. Forget Russia “collusion” and obstruction of justice. For his policies that sanctioned the kidnapping of migrant children from their parents and lost them in an incompetent, inhumane dystopic maze, Donald Trump needs to be removed from office in a vote that will condemn him forever to the hellfires of history. And once that is done, he should be prosecuted and if found guilty, sent to jail.