Fox's Brian Kilmeade questions Ilhan Omar's loyalty: "You have to wonder if she's an American first" 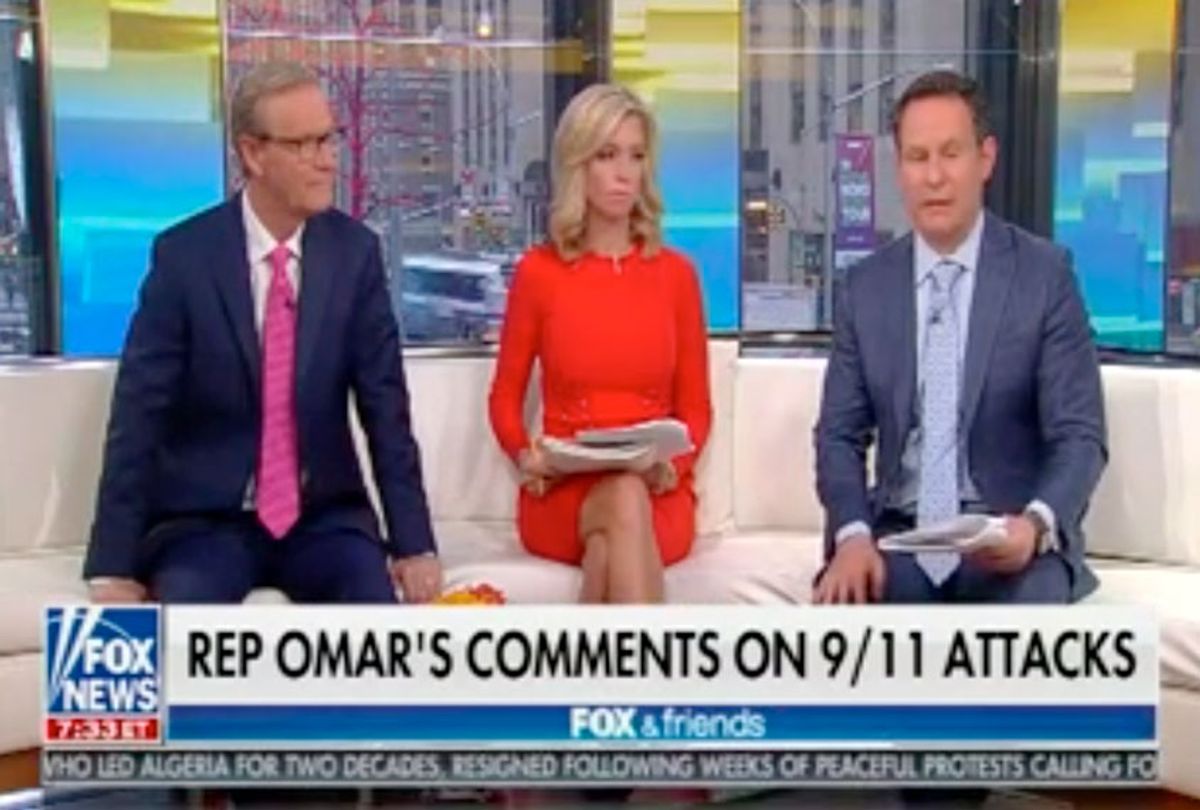 During a Wednesday episode of "Fox & Friends," co-host Brian Kilmeade questioned whether Rep. Ilhan Omar, D-Minn., the first Somali American elected to Congress and the first woman to wear a hijab on the House floor, has a dual loyalty.

"Let's talk a little bit about Congresswoman Ilhan Omar," co-host Steve Doocy said at the opening of segment. "She was last month at an event supporting CAIR, which is the Council on American Islamic Relations. And the sound bite that we're about to play for you that has got some people upset because of how it trivializes 9/11 – the greatest terror attack in our nation's history – which was conducted by terrorists. And here she is talking about how Muslims in this country are scrutinized these days, and then listen to how she describes 9/11."

In the clip, Omar says that for "far too long, we have lived with the discomfort of being a second-class citizen. And, frankly, I'm tired of it. And every single Muslim in this country should be tired of it. CAIR was founded after 9/11, because they recognized that some people did something and that all of us were starting to lose access to our civil liberties."

Kilmeade criticized Omar's use of the phrase "some people did something" as diminishing of the 9/11 tragedy, with Doocy reminding viewers that thousands of people had died as a result of the terror attacks.

Taking things a step further, Kilmeade then appeared to accuse the congresswoman of dual loyalty. "You have to wonder if she's an American first?" he asked aloud.

The co-hosts then quoted a tweet by Rep. Dan Crenshaw, D-Texas, who wrote that Omar was the "first Member of Congress to ever describe terrorists who killed thousands of Americans on 9/11 as 'some people who did something'. — Unbelievable."

Co-host Ainsley Earhardt described Omar's comment as "flippant," claiming it was "an attack that changed our entire country."

"She should use this opportunity as a Muslim leader not to dismiss a Muslim attack — a Muslim extremist attack," Kilmeade later continued.

"She was just talking about how Muslims in this country are now scrutinized and you did hear, there was applause in the audience out there in California," Doocy added.

"Ilhan Omar isn’t just anti-Semitic – she’s anti-American. Nearly 3,000 Americans lost their lives to Islamic terrorists on 9/11, yet Omar diminishes it as: 'Some people did something,'" McDaniel claimed on Twitter. "Democrat leaders need to condemn her brazen display of disrespect."

"When Ilhan Omar isn’t being anti-Semitic, she’s sympathizing with Islamic terrorists," McDaniel alleged in a second tweet. "In 2016, Omar asked a judge for 'compassion' while sentencing an ISIS recruit. Now she’s downplaying the 9/11 terrorist attack. She has no business serving on the Foreign Affairs Committee."

Omar responded on Twitter by slamming the "Fox & Friends" hosts for allegedly inciting violence against her.

"This is dangerous incitement, given the death threats I face. I hope leaders of both parties will join me in condemning it," the congresswoman tweeted. "My love and commitment to our country and that of my colleagues should never be in question. We are ALL Americans!"

Kilmeade reacted to the controversy by saying he had not intended to question whether Rep. Omar was an American.

"I am questioning how any American, let alone a United States Congresswoman, could downplay the 9/11 attacks," the Fox News host tweeted.

You can watch the full "Fox & Friends" segment here via Media Matters: