"Dark stars" were first theorized in 1783. It would take two centuries before humanity truly saw one 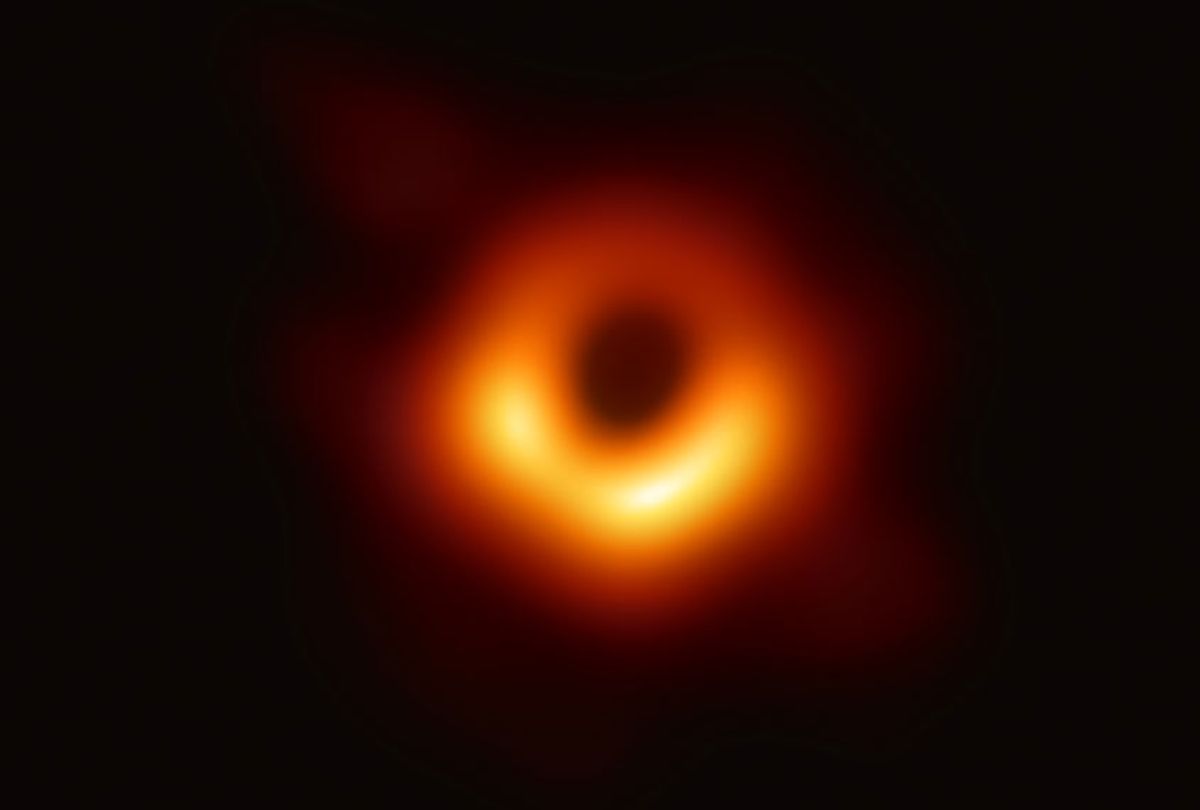 Black holes are a particularly unusual astronomical phenomenon in that they were theorized centuries before anyone had any idea they were a real thing. More remarkably, the lag time between their theorization and their direct imaging was over two centuries. Just today, the Event Horizon Telescope Collaboration presented the first-ever direct image (as seen in the header of this article) of a black hole.

To understand how that happened — how 18th century scientists could have even come up with something so outlandish in the first place, and why it took so long to get the image you see today — you have to know a bit about scientific knowledge back then.

Isaac Newton realized the physics concept of escape velocity, meaning the speed at which a projectile must move to escape the gravitational pull of the object to which it is bound. To wit: In order to escape Earth's gravitational pull, you would have to leave the surface traveling around 11 kilometers per second. To escape the pull of the sun is a much more difficult feat: a minimum velocity of 618 kilometers per second will suffice. Rocketry, then, really is as simple as overcoming escape velocity. If you were capable of throwing a baseball at 11 kilometers per second, it would effectively leave Earth's orbit. (Though in reality, air resistance would slow your baseball slightly on the way out.)

The equations for calculating escape velocity fall easily out of Newton's equations governing gravitation. Hence, if people in the 18th century had the means, they could have easily sent rockets into orbit. For the most part, orbital calculations today rely on Newtonian gravitation equations.

But black holes are a far more outlandish concept than an orbiting projectile. How could 18th century scientists have had any inkling of what a black hole was, or that it might exist? The seed of the idea formed in 1783, when British scientist and philosopher John Michell, looking at the Newton-derived escape velocity equation, posed a simple question: was it possible for a star to have an escape velocity greater than the speed of light? Such an object would thus bend the light it emitted back into itself, effectively becoming invisible. Fittingly, Michell called this theoretical object a "dark star."

At that moment in history, the speed of light was known to remarkable accuracy; in 1729, James Bradley had measured it with less than 1% error from its known value. Calculating the properties of a dark star was as simple as plugging in Bradley's measurement of lightspeed and seeing what came out the other end of the equation. Using the mass of the sun, Michell calculated that if it were 500 times as dense, light itself would be unable to escape its surface. With that, the idea of a black hole was first conceived. Hundreds of years would pass before anyone would realize Michell's thought experiment was really a prophecy.

It wasn't until the next physics revolution, unleashed by Einstein's formulation of general and special relativity, that physicists became interested in black holes once again. Just as with the Newtonian equations for escape velocity, the idea of a massive singularity from which not even light could escape fell out of Einstein's equations, too.

Applying Einstein's special relativity equations to the particles within white dwarves —small, massive stars that no longer undergo fusion, and are the collapsed remnants of larger exploded stars — Indian astrophysicist Subrahmanyan Chandrasekhar inadvertently predicted the basis for the existence of black holes. Relativity, then, was a new tool for physics. For the uninitiated, relativity is the study of how things get weird when particles (or objects) are moving really fast. Subatomic particles in stars, like protons and electrons, bounce around at exceedingly fast speeds, depending on the mass and temperature of said star. Prior to the advent of relativity, the side-effects of the fast-moving particles within stars were not nearly as well understood. Chandrasekhar's innovation was to propose a limit — now known as the Chandrasekhar Limit — for the maximum mass of white dwarves, after which they would collapse into neutron stars.

Piggybacking on Chandrasekhar's work, physicist Hartland Snyder and J. Robert Oppenheimer asked if there was a second limit after which a star would collapse further, past a neutron star, to a single point at which mathematical models broke down — a singularity. When a star collapses into a neutron star, the gravitational pull is so vast as to smush together negatively-charged electrons and positively-charged protons, forcing the star into a ball of neutrons that are bound as close as atomic nuclei. They're basically giant atoms, and accordingly astonishingly massive. Neutron stars have an inherent pressure between neutrons that keeps them repelling each other, counteracting gravity somewhat. Snyder and Oppenheimer wanted to know if a star could collapse further, and overcome even that limit — turning into the long-theorized black hole.

Jocelyn Bell Burnell would discover neutron stars in 1967, while doing graduate research in radioastronomy. Black holes would remain elusive for a bit longer.

In 1972, analysis of the Uhuru satellite — an orbiting x-ray telescope — convinced scientists that they had discovered, for the first time, a black hole. The New York Times story from that day was cutely tautological; after all, the term had yet to enter mainstream discourse:

After almost a year of observation and analysis several astronomers believe they have confirmed the existence of a "black hole" in the sky.

Black holes, which until recently existed only in the, imagination of theorists, are so called because it is thought that they do not permit light to radiate from themselves or even pass close by. They are, thus, black holes in the heavens.

The black hole that they had confirmed was Cygnus X-1, a binary star consisting of a supermassive star co-orbiting a black hole. The black hole companion sloughed off gas from the corona of its sister star, which collected around the gravity well of the black hole, generating constant streams of energetic x-rays that were detected on Earth by Uhuru. You can see an image of Cygnus X-1 in the x-ray spectrum here.

In the case of Cygnus X-1 and other black holes "imaged" by x-ray telescopes like Uhuru and the Chandra X-Ray Observatory (named for Chandrasekhar), what we see is different from the newly released images from the Event Horizon Telescope Collaboration. In these photos, the x-rays are residual, scattered founts from debris; we don't see the accretion disk and the "void" around the black hole itself.

This 1972 discovery from Uhuru had an outsize effect on the public consciousness. Indeed, since then, black holes have become a staple of science fiction; their bizarre nature often symbolizes mystery or transcendence, as in the 2014 movie "Interstellar" or in many episodes of "Star Trek". This chart, from Google Books, shows the percentage of written texts that included the phrase "black hole", graphed year-to-year. The discovery in 1972 of black holes led to a massive spike in their appearance in literature.

Still, even as film and books have strong opinions about what black holes looked like, scientists lacked direct images until today.

But back to the 1972 Uhuru data. Was that not an image of a black hole? If Uhuru didn't see a black hole directly, what did it see? For starters, the idea of a "direct" image of a black hole is slippery. After all, if black holes only absorb, and do not emit, how do you "see" one? The truth is that black holes are not entirely sinks; as gravity decreases with distance, there are points around a black hole where a lingering particle, massless (like a photon) or massive, would not necessarily be swept into the black hole, but swung around it and ejected at great speed — like a leaf that gets near a tornado but does not enter its center, and is instead ejected violently. The accretion disks around black holes are what scientists saw in Cygnus X-1  — a bright point of x-ray light, the result of these particles whirling around the event horizon. It took another 47 years for us to get an image of something closer, close enough to see the details of the void.

That is, in essence, what today's image from the Event Horizon Telescope Collaboration represents: years of advances in imaging technology, which finally resulted in a composite that shows a blurry but serviceable image of the accretion disk and the event horizon at the center, meaning the point past which no light can escape. The image in the header of this article is a culmination of 236 years of philosophy, science and technology, creative by the collective work of tens of thousands of humans working in those disciplines.