Nancy Pelosi says she does not trust William Barr: "He is not the attorney general of Donald Trump"

"The fact is the president has engaged in activities that are unethical, un-American," Pelosi says in new interview 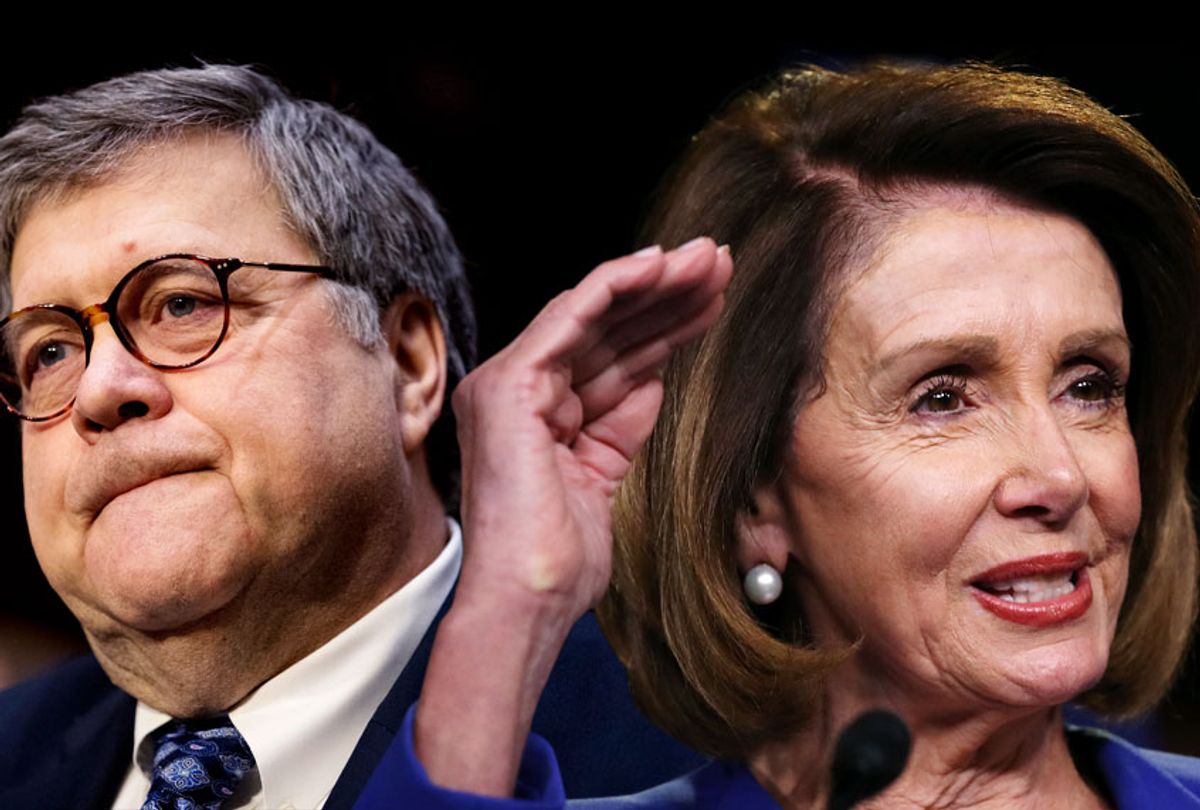 Although she trusts the conclusions reached by special counsel Robert Mueller during his investigation into Russian interference in the 2016 election, House Speaker Nancy Pelosi, D-Calif., does not have confidence in Attorney General William Barr's ability to accurately convey them.

The House speaker also said she was "very concerned" about how Barr has handled the release of the Mueller report to date. According to Pelosi, there is no sound reason for the Trump administration and its congressional allies to not want members of the House of Representatives to see the Mueller report. "Let us see the report," Pelosi said.

She added, "The fact is the president has engaged in activities that are unethical, un-American . . . In every way he is unfit to be the president of the United States."

While she did not clarify whether or not she believed Trump had committed an impeachable offense, Pelosi made it clear that any conclusions about potentially illegal activity would have to be based on the report itself.

"Is that an impeachable offense? Well it depends on what we see in the report," Pelosi told the AP. "I set a very high bar for impeachment, because I think it’s very divisive in the country and one of our purposes is to unify, as our founders gave us guidance: 'E pluribus unum,' from many one."

Barr's handling of the release of the Mueller report has been the subject of much scrutiny in the weeks since he first released a four-page summary clearing the Trump campaign of criminal collusion with Russia during the 2016 election. Although the Mueller team declined to offer an opinion as to whether Trump had obstructed his inquiry, Barr took it upon himself clear the president of wrongdoing. Members of Mueller's team have claimed Barr misrepresented the degree to which the special counsel's office had vindicated the president's name in his conclusions.

Matthew Miller, a legal analyst and former spokesperson for the Justice Department under former President Barack Obama, wrote for Politico that "Barr has also moved the goalposts on what categories of information would be redacted from the report, adding two new ones to the list he announced on March 24, while refusing so far to ask a court for permission to release grand jury material, as the Justice Department did at the conclusion of two previous investigations into presidential misconduct."

The fact that Barr circulated a memo he wrote among Trump administration officials in the summer of 2018 arguing that Trump could not have obstructed justice in the Russia probe. Barr arrived at his unsolicited opinion before he even had access to Mueller's evidence or was Trump's nominee to replace former Attorney General Jeff Sessions. This has done little to erase suspicions of Barr's glowing summary of the Mueller report.

“I’ll be satisfied when we have a new president of the United States who is a Democrat," Pelosi told the AP.