Oh, the irony: Julian Assange's support for Donald Trump comes back to haunt him

If Assange had stayed out of the 2016 election and faced those 2010 rape charges, he'd likely be a free man today 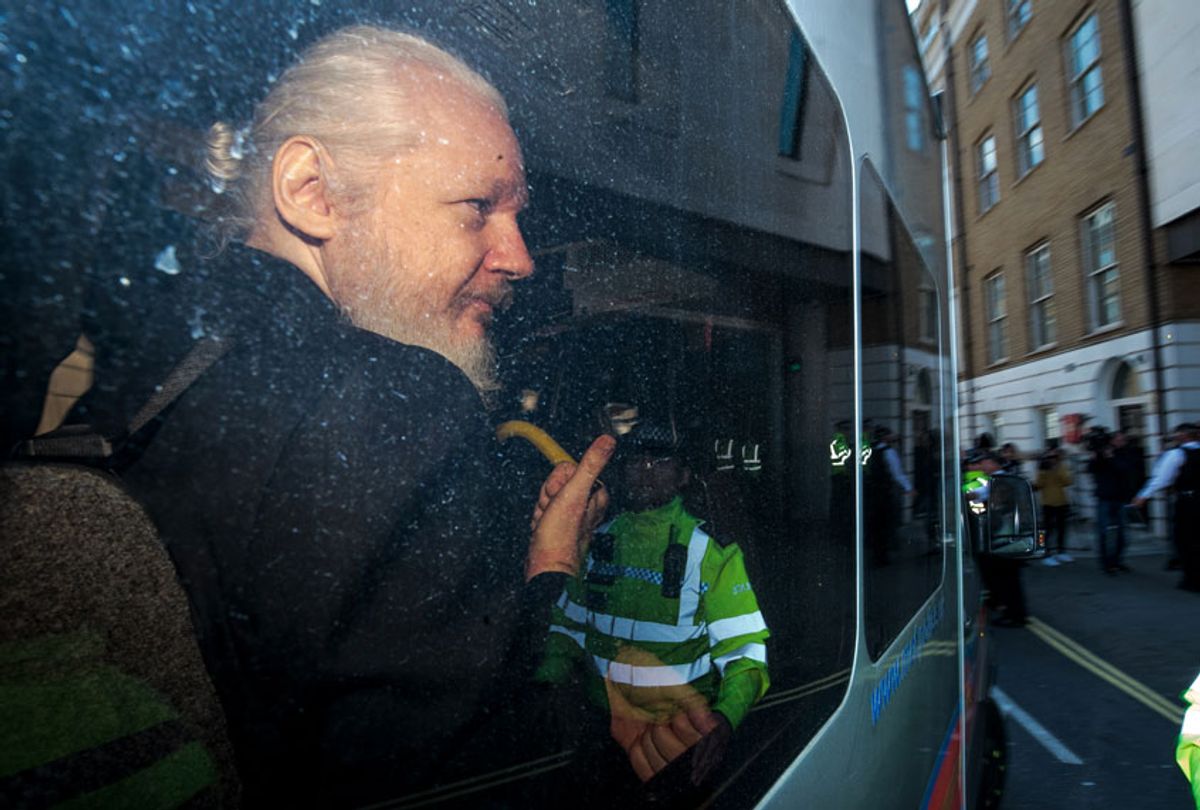 Julian Assange gestures to the media from a police vehicle on his arrival at Westminster Magistrates court on April 11, 2019 in London, England. (Getty/Jack Taylor)
--

In a twist worthy of an O. Henry story — or possibly a classic Greek tragedy — WikiLeaks founder Julian Assange's own hubris is what led ultimately to his arrest. For, without Assange, we would likely not have a President Donald Trump, and without a President Trump, Assange would likely not have been hauled out of the Ecuadorian embassy on Thursday, under arrest by British authorities responding to an extradition request from the Trump administration that Assange himself worked so tirelessly to elect.

In many ways, Assange is a human synecdoche for a larger, troubling trend of supposedly leftist or progressive white men who, feeling threatened by women and people of color's growing demands for equality, have turned their back on progressive values and helped usher in the rise of right-wing authoritarianism.

Before college professor Jordan Peterson started using lobsters as a cudgel against women's equality, before author Sam Harris started just-asking-questions about whether black people are inherently intellectually inferior, and before Joe Rogan built a podcast empire for white men who think they're the ones who are truly oppressed, there was Assange, sitting in the Ecuadorian embassy and using his international stage to push the idea that the real fascists in this world were liberal Democrats and anti-rape feminists.

Assange rose to international fame by styling himself an anti-authoritarian leftist, and initially, the shoe seemed to fit. His biggest coup, as a professional leaker out to disrupt systems of power, was the 2010 publication of a massive trove of classified materials leaked by U.S. Army intelligence analyst Chelsea Manning, including videos of 2007 and 2009 military strikes that exposed the cruelties of the ongoing "war on terror." This work was rightly viewed as critical muckraking journalism and probably did a great deal of long-term good. Among other things, it put international pressure on Barack Obama to move back toward the more pacifist or non-interventionist image he had campaigned under in 2008.

But things quickly deteriorated. In 2010, two Swedish leftist activists, originally WikiLeaks allies, accused Assange of rape and molestation. In 2012, rather than face the charges, Assange sought political asylum in the Ecuadorian embassy in London, where he remained until his arrest Thursday. He spent much of his seven years in that building waging a perverse political war against liberal Democrats and feminists, which ultimately led him to support Trump's 2016 campaign against Hillary Clinton, as leaked WikiLeaks chatlogs later proved.

That support was quite likely be a major factor in Clinton's narrow defeat. Assange, who used to oppose authoritarian governments, instead became a stooge for Vladimir Putin's efforts to influence or distort the 2016 presidential election. WikiLeaks was famously the cut-out used by Russian intelligence to leak emails stolen from the Democratic Party and the Clinton campaign. While it's still not clear whether Assange knew that he was being used by the Russians, what's clear enough is that he was happy to frame the email releases exactly as Russian spies hoped he would, constantly stating or implying that they contained far more damning information about Clinton than they did.

Assange really hates feminism. He whined about the "hornets' nest of revolutionary feminism" that he blamed for the sexual abuse charges against him, saying that "Sweden is the Saudi Arabia of feminism." Inside the embassy and free to be a jackass on Twitter, Assange continued his attacks, implying that the #MeToo movement was largely about false accusations and proclaiming that men who support feminism are liars.  His intense hatred of Clinton was clearly fueled by this paranoid sexism, leading to choices like putting up a "poll" on Twitter based on the right-wing conspiracy theory that Clinton was hiding a degenerative brain disease.

Watching Assange, bedraggled and angry, getting arrested at the embassy — after the Ecuadorian government got sick of his antics and turned him out — brings a complicated mix of emotions. On one hand, it's hard not to delight in the irony of Assange being arrested at the behest of the very authoritarian administration he helped install. On the other hand, there's real reason to worry that the Trump administration will use Assange's case to open the door to extensive assaults on the free press.

It cannot be overstated how much Assange did this to himself. If he had turned himself over to Swedish authorities when they first called him in for questioning, he's probably be a free man by now. The charges against him were dropped in 2017, but even if he'd been convicted, his sentence would have been light, thanks to Sweden's progressive sentencing guidelines. If he'd stayed out of the 2016 election entirely, he would have had little to fear from a President Hillary Clinton. It's not likely that any attorney general she might have appointed would have bothered to go after Assange in the first place.

That conclusion may surprise some people. Assange has long stoked the idea that he was in serious danger of extradition by a Democratic administration for his role in the Manning leaks, which is exactly what the Trump administration hopes to prosecute him for. But Obama and then-Attorney General Eric Holder — while definitely not happy about the leaks of classified information — also decided against pursuing a case against Assange in 2013, out of fears that it would set a precedent that would be used against more legitimate journalists. In all probability, a Clinton administration would have respected that conclusion.

But Donald Trump, whom Assange worked so hard to elect, has no such concerns about a free press. On the contrary, Trump has spent years railing against the press and hinting that he believes he should be able to leverage government power to censor or punish media outlets for unfavorable coverage. In fact, the very thing that held Obama and Holder back — fear of setting a dangerous precedent that could chill press freedom — is very likely exactly what is compelling the Trump administration to go after Assange in 2019.

(One mitigating factor is that so far the government has only charged Assange with helping Manning with the original hack itself, which could mean that this case can't be used as a precedent for cracking down on the free press. Here's hoping.)

Trump isn't a man known for giving back to those who help him, after all. Prosecuting Assange will help Trump further his attacks on the First Amendment, so there's little chance he'll feel constrained by gratitude for Assange's role in getting him elected  in the first place.

Assange also makes a useful target because he has few friends left. By helping torpedo Clinton in the 2016 election, he made bitter enemies out of the very liberal Democrats who would otherwise be inclined to oppose efforts to punish independent journalists for publishing leaked government documents. It's especially hard, in our black-and-white age driven by social media reactions, to have a nuanced discourse about how Assange may deserved to be in prison, but not for the thing he's being charged with. And that's exactly what the Trump administration is counting on.

Zooming out a little, however, it's almost stunning what a neat and tidy morality play Assange's life turned out to be. It's about the dangers of the "intellectual dark web," which views laws against sexual abuse and social prescriptions against sexist conduct to be a greater threat to freedom than, you know, actual authoritarianism. That stance becomes a little harder to maintain when those proto-fascists you wrote off as relatively harmless are dragging you off in handcuffs for exercising what used to be a legal right to free speech.