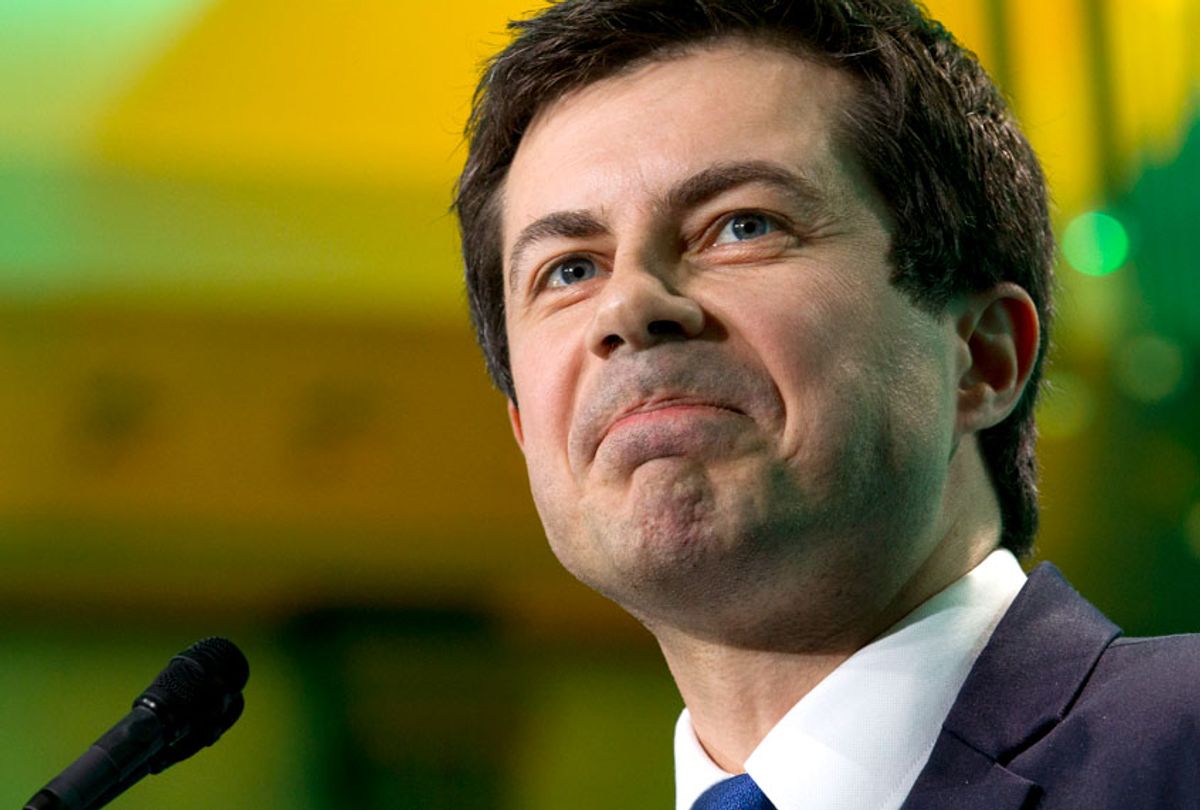 Pete Buttigieg, the 37-year-old Democratic mayor of South Bend, Indiana, continues to gain traction with Democrats in the presidential nominating states of Iowa and New Hampshire, according to the results of a new pair of polls released Thursday.

The first survey of likely Democratic caucusgoers in Iowa, conducted by Monmouth University, reveals that Buttigieg has the support of 9 percent of those who say they are likely to attend the state's nominating event in February 2020. The small-city mayor, who is set today formally kick off his presidential campaign Sunday in his home town, finishes in third behind former Vice President Joe Biden and Sen. Bernie Sanders of Vermont.

Biden, who is likely to enter the race later this month, is the first choice of likely caucusgoers with 27 percent, followed by Sanders, a self-described democratic socialist, at 16 percent.

The poll places Buttigieg marginally ahead of a host of candidates who entered the race with more established profiles and experience in higher office: Sens. Kamala Harris of California and Elizabeth Warren of Massachusetts are at 7 percent, followed by former congressman Beto O'Rourke of Texas at 6 percent, Sen. Amy Klobuchar of Minnesota at 4 percent and Sen. Cory Booker of New Jersey at 3 percent.

The previous poll of likely Iowan Democratic caucus participants, conducted by Emerson Polling last month, also had Biden leading the 2020 Democratic presidential field with 25 percent. Sanders came in a close second at 24 perfent, while Buttigieg came in third at 11 percent.

Buttigieg, who is vying to become the first openly-gay presidential nominee from a major political party, still trails most of the other Democratic heavyweights in name recognition, according to the latest poll. Nearly a quarter of likely caucusgoers, 24 percent, say they have not heard of the mayor, compared to 3 percent who have not heard of Warren, 7 percent who haven't heard of O'Rourke, 10 percent for Harris, 11 percent for Booker and 16 percent for Klobuchar. Biden and Sanders have near universal name-recognition.

Still, Buttigieg has his supporters: 45 percent of likely caucus participants view him favorably, while just 9 percent have an unfavorable opinion of him. The remaining 24 percent say they have heard of Buttigieg, but do not have an opinion of him.

"Buttigieg's current standing in the horse race is impressive given that nearly half of likely Democratic caucusgoers have yet to form an opinion of him," Patrick Murray, the director of the Monmouth University Polling Institute, says. "He has one of the best positive to negative ratios in the field. He could move up if he is able to maintain that rating as he introduces himself to more voters."

The Monmouth poll was conducted April 4-9, surveying 351 likely Democratic caucusgoers. The results have a margin of error of plus or minus 5.2 percentage points.

Another early-state poll released Thursday shows the Indiana underdog cruising into third place. A survey by the St. Anselm University in New Hampshire showed similar results, with Biden at 23 percent, Sanders at 16 percent and Buttigieg at 11 percent.

The dark horse presidential candidate sees the biggest increase among 2020 contenders since the poll was last conducted in February. He has seen a 33 percent jump in name recognition in the Granite State since then, following a wave of national press and social media attention of his not-yet official campaign in recent weeks.

The St. Anselm poll was conducted between April 3-8, surveying 326 randomly selected registered Democratic voters in New Hampshire. It has a margin of error of plus or minus 5.4 percentage points.