How will "Game of Thrones" end? Fans on Salon's staff have theories 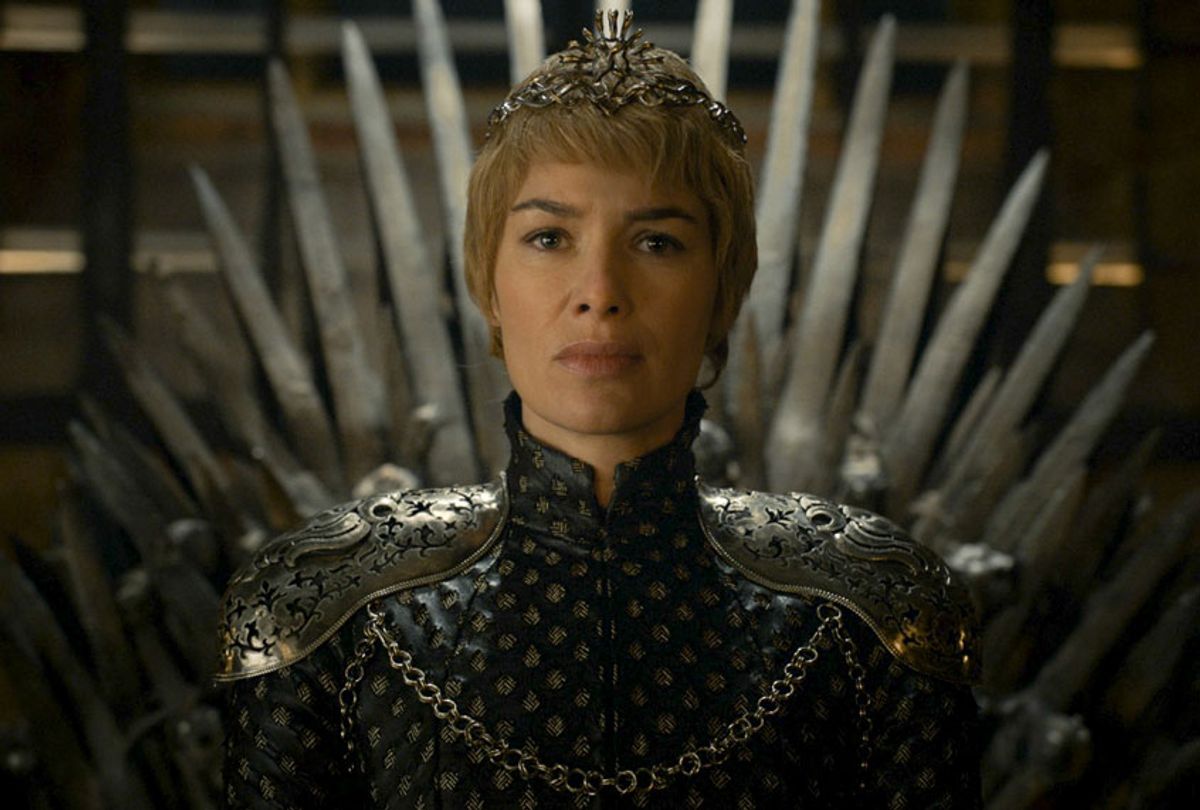 Alas, winter is here. For those who still believe that not watching "Game of Thrones" is a personality, this means that the long-anticipated final and eighth season of the HBO series returns Sunday, April 14 at 9 p.m. The ever-complex and interconnected storylines and characters, combined with the fact that "Game of Thrones" does not care about your feelings, has always allowed for any number of possible endings. In all likelihood, everyone will die, since the closing scene in Season 7 showed the Army of the Dead — least 100,000 strong and counting, including a dragon and several giants — successfully destroying The Wall that has stood for thousands of years and which has marked and protected the borders between the Seven Kingdoms and the unpredictable, frightening territory and its inhabitants that exist beyond it.

But since there are six long episodes slated for this final season, it feels safe to say that the battle between the living and the dead — in which humanity could be entirely wiped out — can't be resolved one way or another right out of the gate. There's too much unfinished business, as the trailer reminds us.

Jon Snow has to find out his true bloodline. As my colleague Amanda Marcotte wrote, fans need a "Cleganebowl" showdown between brothers The Mountain and The Hound. Will Arya Stark finally be able to cross Cersei Lannister — who is by no means finished with wreaking absolute reckless, soulless havoc on anyone who dares to question her power — off her list? Cersei's brief, evil smirk in the trailer already gives me chills; she's capable of so much, especially with everyone else distracted by literally fighting for their lives.

This brings me to my theory, or rather my hope for this final season. I'm not greedy; I know that many characters I love will perish, as many have already  — R.I.P. Hodor, Wun Wun! — but I need to see Cersei Lannister die. If nothing else, fans deserve to see that, just as we did the just deaths of Ramsey Bolton, Joffrey and finally, last season, Peter Baelish. I don't care who delivers the final blow, though Arya as the assassin would be fantastic. But there are a slew of theories that predict Cersei will be murdered instead by her brother-lover and father of her children (including her current pregnancy) Jamie Lannister.

In the trailer, we hear Jamie declare, "I promised to fight for the living, I intend to keep that promise," which suggests that he's finally broken ties from Cersei and joined Jon Snow and Daenerys Targaryen in the battle against the dead. But Jon also speaks of their enemy as one who "doesn't tire; doesn't stop; doesn't feel," in the trailer, which just as easily be could be a spot-on description of Cersei as it is the Night King and his Army of the Dead.

Since every "Thrones" watcher has their own set of predictions for how it will end and who, if anyone, will sit on the Iron Throne as the final credits roll, I asked my colleagues at Salon for theirs. Please enjoy our theories on how "Game of Thrones" will play out, which range from likely to utterly insane.

Arya and Sansa are destined to meet a terrible fate just like the rest of their family. But not until Arya gets some more revenge at least. There’s just no room for the Starks in this story anymore, except for maybe the fake one, Jon Snow. Speaking of Jon, his romance with Daenerys will absolutely be the end of him. They will both end up fighting each other at some point, which will eventually lead to their demise, probably by that crazy ice dragon.

Cleganebowl! There’s no doubt that the towering brothers will meet face to face. But there’s a twist: Arya will kill both of them in the end.

Bran built it all. He built the wall using his weird and confusing time-traveling abilities. He saw all this coming. Not that it will help. Also he probably is the Night King, and has been the Night King all along. No big deal.

But the last shot of "Game of Thrones" has to be Cersei reigning supreme as the Night Queen. She will make some sneaky deal with the Night King to trade her life for queendom, but not long after she kills her lover — I mean brother — Jamie, who will obviously commit to his face turn and fight her.

The Other Secret Targaryen

I know a lot of fans hate it, but I love the theory that Tyrion Lannister is secretly Daenerys Targaryen's half-brother. In the books, it's strongly hinted that Dany's father, the Mad King, raped Tywin's wife and impregnated her with Tyrion. That is why Tywin hated Tyrion and refused to let him inherit Casterly Rock. Which, if true, means Tyrion is even more closely related to Dany than Jon Snow is, and his obvious lust for her even more disturbing.

Cersei kills Tyrion, which will be the final straw for Jaime, who will then kill Cersei — so either way you read Maggy the Frog's prophecy, it comes true. Jaime is killed in battle against the White Walkers. Dany is killed by Viserion. The Night King kills Jon Snow. Bran turns into a tree. I have no idea where this leaves Sansa, but Arya and Gendry join House Stark and House Baratheon together to sit on new thrones that Gendry forges. They'll rule together over the ruins of the seven kingdoms as equals, with Brienne serving as the hand of the King and Queen. If all of this happened, it would devastate my death pool picks, but it would also be so satisfying to watch.

All Along the Night's Watchtower

It ends with a massive time leap, like "Battlestar Galactica" did. Jonathon Snow, underemployed London bro, gets hired by hot blonde single mom Dani as a "manny" for her three rambunctious kids. Soon, they're the talk of the cul de sac. Will "bad mom" Dani beat alpha mom Cersei when they compete for head of neighborhood association?

What We Got Wrong About the Night King

In a surprising shift of perspective, the Night King will be revealed as a rebel hippie sex god, devoted to veganism and pansexuality, who will bring permanent peace and universal equality to Westeros. Sorta like Mao Zedong's Cultural Revolution, but with undead dragons.

“We need to light the fires"

Bones. He realized it was bones crunching under his worn leather boots, a different kind of crackling sound than the melting ice giving way under his footfalls, evidence that a spring nobody thought would come was, indeed, on its way. Yet this new beginning was heralded not by a raven from the Citadel, if that even existed anymore, but a mouse — living, breathing, and warm with life.

Then came another, and another, enough that he and the rest hidden in the silent dark felt secure enough that this influx of small rodents wasn’t a fluke. They also made for tasty eating.

The man could not remember how long he and his brethren from town hid in the caves, the discovery of which was a fortunate accident: The earth shuddered, and a hole opened up beneath the inn’s larder, where a handful managed to keep out of sight when the cold rolled in. He led his band inside and closed it up behind them, and there they stayed, subsisting in the muddy blackness on roots and water from icy underground aquifers. Only the Seven knows for how long.

Those who did not succumb to dark eventually decided to press forward, blindly, through ancient natural pathways. They did this for months, it seemed, until against all belief, they came upon an opening to the King’s Road — and daylight.

Now, here they were in the graveyard that was once known as King’s Landing — his former home — strolling into a place he never thought he’d see up close: the Great Hall, where the Iron Throne sat empty. To his surprise he found no queen or king there, just skeletal remains, including a pile of sparkling dust surrounding what appeared to be a finely made dagger.

"If we are all that remains…" one of his followers offered meekly, but the man cut him off.

"No. That cannot be. If we are here, there must be others who survived, and they too will hear the call of spring." He gazed down at his forearm, long transformed by hunger and the will to live into a gnarled work of sinew and muscle.

“We need to light the fires. Let them know they will find comfort here.” He nodded towards the door. “Seek out the kitchens. See if anything remains that we can use. We must eat to regain our strength, and be ready to feed others who come. And by the Mother, pre-heat the ovens.”

He ascended the steps and, in the most daring act of his life, sat down on the sharp, uncomfortable chair that once cupped and cut the bottoms of the sons and daughters of noble houses. How strange the fates, he thought, before clearing his throat. He knew his next words would resonate across the ages.

“Let the Seven Kingdoms be renewed, and...and...be comforted by a crust of gladness,” he said to his assembled companions. “Soon we will see the fruit trees blossom yet again. Sour cherry, hopefully. Then we can pick the fruit, dry the stones and crush them up real fine to sprinkle them over the pie crust..."

The onlookers stared at him, confused.

“What I mean to say is, the Great War Is over. Now begins a time of the common folk rebuilding our world, a time of peace…and pastry for all, savory or sweet. Now begins the reign of…King Hot Pie!”

The hall thundered with joyous bellowing, augmented by the happy roar of oven fires in the nearby kitchens once again warming to a gentle 350 degrees.

Ok, I’ll take a guess: I predict that the white guy wins!