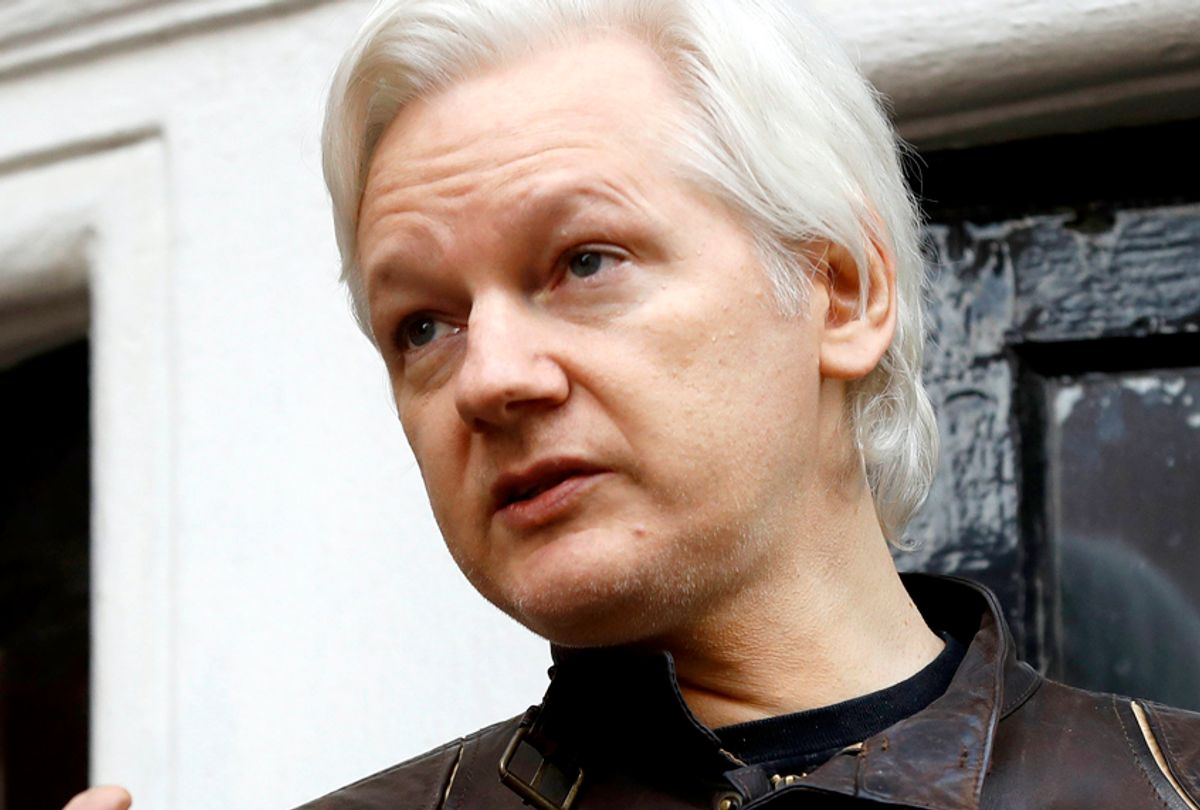 A new sketch on "Saturday Night Live" poked fun at a number of celebrity scandals that have resulted in real or potential prison stretches... including by depicting Julian Assange, who was arrested last week for allegedly engaged in a "computer hacking conspiracy" to expose human rights violations by the American military, as "an actual James Bond supervillain."

The premise of the sketch that is a number of prominent celebrities are sharing the same jail cell, including Lori Loughlin (Kate McKinnon), Michael Avenatti (Pete Davidson) and Tekashi 6ix9ine (Melissa Villaseñor). With the exception of Tekashi 6ix9ine, each one is attempting to argue that they are the craziest prisoner in the facility.

McKinnon's Loughlin argues that she's the craziest because "I paid 500 grand to get my daughter into USC... You heard me, I paid 500 grand to a women’s crew coach to say my daughter was good at rowing. I’m loco." The actress also added that this didn't include the 300 grand she spent on tuition, and later added that she was tough enough to survive prison because "I have done 68 Hallmark movies. I’ve seen hell, man. And in half those Hallmark movies, I marry Santa’s son, so I have lost all sense of reality. I’m going to take your heart and I’m going to cut it out."

Near the end of the sketch, Tekashi 6ix9ine (Melissa Villaseñor) avoided directly contributing to the argument over who was craziest and simply added that he was in prison for "robbery and gun stuff."

Yet it was Michael Keaton's characterization of Julian Assange that stood out. While the arrests of Loughlin, Avenatti and Tekashi 6ix9ine are not particularly controversial, many in the media and general public have claimed that Assange is a hero of the free press who was arrested for exposing American war crimes. "Saturday Night Live," on the other hand, did not depict Assange sympathetically.

"You sons of bitches wanna know how crazy I am? Here’s how crazy I am. I’m wanted in the U.S. and Sweden. I’m from Australia. I live in London in Ecuador. You try figuring that one out," Keaton's Assange declares in the sketch. "Yeah, you cheat your schools, and yeah, you rob your companies. That’s cute. It is. Yeah. I’ve attacked the U.S. military, bitches, because I’m an actual James Bond supervillain, and I’m one step away from destroying the goddamn moon. So you wanna get nuts? Come on, let’s get nuts!"

Keaton's Assange also refers to himself as the "architect of anarchy," the "king of chaos" and the "scourge of the cleaning staff at the Ecuadoran embassy." When a convict played by Kyle Mooney stands up to him, Keaton's Assange threatens to publicize "all your ding-dong pics." Later he asks for help by saying, "Is there a bathroom around here? Because I gotta take a Wikileak."