"That is just like a dagger to the heart of Paris to see that happening," NBC News correspondent Anne Thompson said 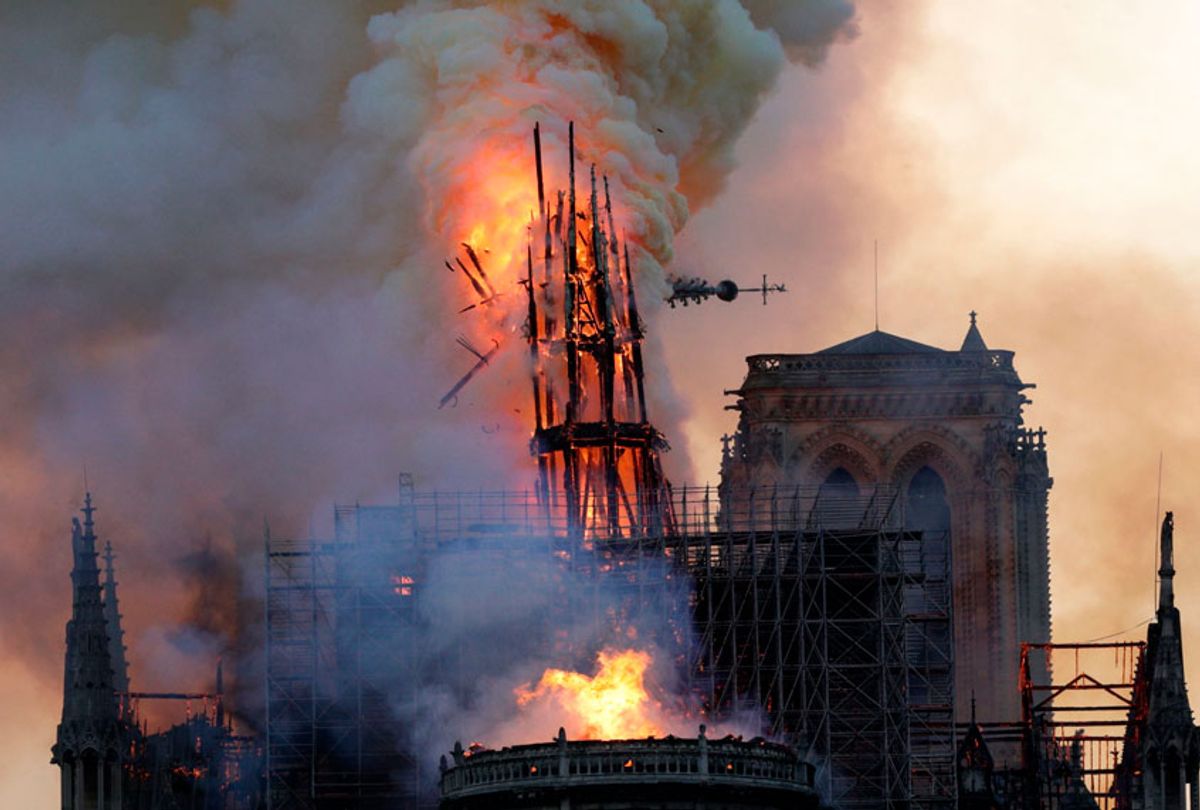 The steeple collapses as smoke and flames engulf the Notre-Dame Cathedral in Paris on April 15, 2019. (Getty/Geoffroy Van Der Hasselt)
--

France's historic Notre Dame Cathedral erupted in flames Monday ahead of the celebration of the holy day of Easter.

"That is just like a dagger to the heart of Paris to see that happening," NBC News correspondent Anne Thompson said on live television as video of a spire falling played on screen.

Giant clouds smoke of smoke could be seen for miles across the capital city of Paris, according to NBC News. Witnesses told the network they had also seen parts of the cathedral's roof collapse.

"A terrible fire is underway at Notre Dame Cathedral," Mayor Anne Hidalgo tweeted, according to a translation from CNN. "The fire brigade are trying to control the fire. We are mobilized locally in close connection with church authorities. I ask everyone to respect the security perimeter.”

While the cause of the fire remains unknown, renovations costing $6.8 million were being conducted at the historic cathedral, according to NBC News.

Vice President Mike Pence offered his "thoughts and prayers" to the people of Paris, as he talked about the "heartbreaking" sight of seeing a holy site on fire.

"Notre Dame is an iconic symbol of faith to people all over the world – and it is heartbreaking to see a house of God in flames," Pence tweeted Monday. "Our thoughts and prayers are with the firefighters on the scene and all the people of Paris."

President Donald Trump, for his part, offered suggestions for how to put out the blaze, tweeting Monday that officials "must act quickly."

"So horrible to watch the massive fire at Notre Dame Cathedral in Paris," the president wrote. "Perhaps flying water tankers could be used to put it out."

Cardinal Timothy Dolan of New York tweeted Monday that he prayed for the "splendid house of prayer" to be preserved from another landmark gothic cathedral: St. Patrick's.

"I just went next door to our own beloved Cathedral, Saint Patrick’s, to ask the intercession of Notre Dame, our Lady, for the Cathedral at the heart of Paris, and of civilization, now in flames!" the cardinal tweeted. "God preserve this splendid house of prayer, and protect those battling the blaze."

"Built in the 13th century, the medieval cathedral is considered a feat of architecture as much as a religious symbol," CNN writes. "It is one of Paris' most popular attractions, drawing an estimated 13 million visitors a year."

Watch live video of the fire via France 24: