Trump doubles down on bigotry for 2020, but Democrats can win by fighting back 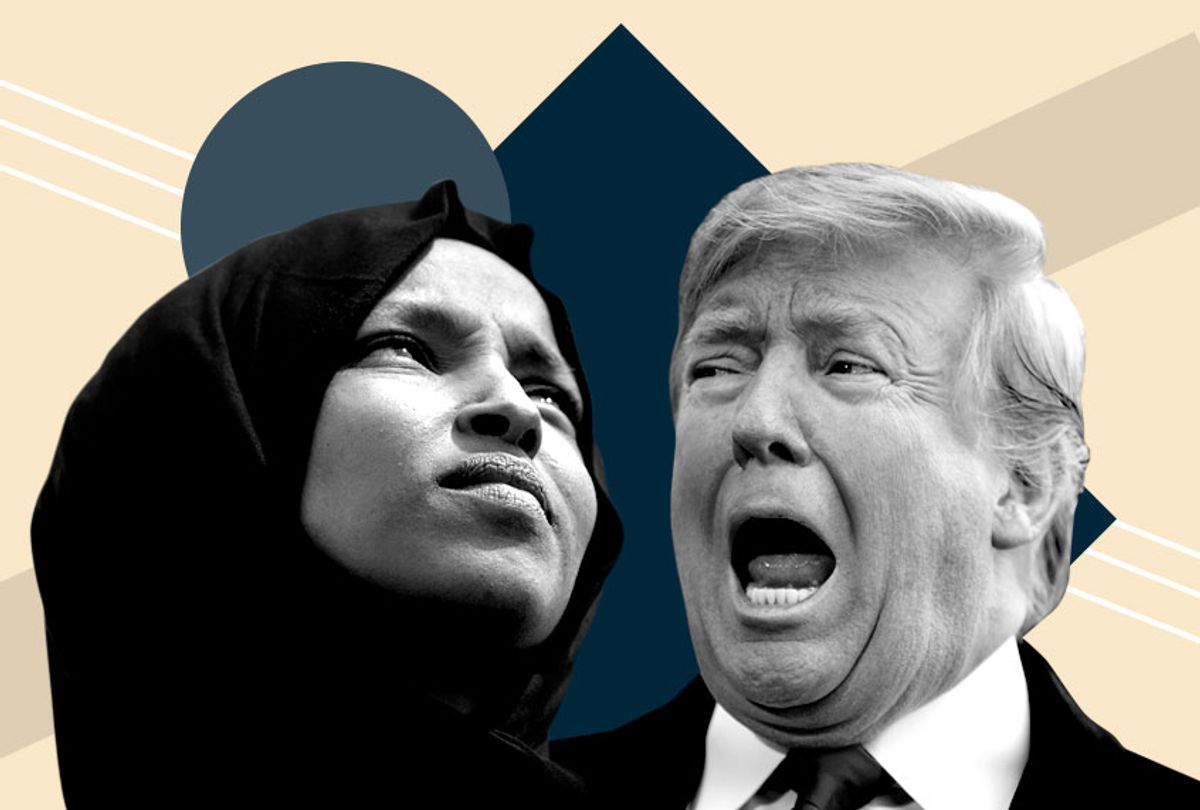 On Monday morning, Maggie Haberman of the New York Times published an article confirming what most honest political observers understand as basic common sense: Donald Trump is lying about Rep. Ilhan Omar, D-Minn., because he thinks stoking bigotry against Muslims is a winning campaign issue in 2020. Even as the White House continues to gaslight the press about this, denying that Trump is doing what he is obviously and unapologetically doing, Haberman writes: "Trump’s electoral success in 2016 was based partly on culture wars and fears among an older, white voting base that the country it knew was slipping away." He clearly thinks that amping up the racism and sexism will be a winning strategy one more time.

It would be unwise for Democrats and their voters to become complacent about the possibility of Trump winning re-election. But there's good reason to believe Trump is wrong to believe confident that the same golden ticket of hatred will pay off again in 2020. But to beat this, Democrats need to be forceful in their response, and not indulge the long-standing Democratic tendency to give in, in hopes it will all goes away. It won't. I promise you, Trump has no intention of letting up on Omar or any of the other women of color he can use as scapegoats for the Fox News audience.

Omar, like several other young Democratic women of color in the new Congress, has become a muse for the purveyors of faux outrage at Fox News and other right-wing outlets since the Democrats swept to victory in 2018 and seated the most diverse Congress in American history. Rep. Alexandria Ocasio-Cortez of New York has of course been a favorite Fox News hate object, rating 3,181 mentions within just 42 days, according to a Media Matters study. But Omar, who wears a hijab and therefore is recognizably Muslim to even the most ignorant and confused of viewers, is swiftly gaining traction as the person right-wing propagandists dangle in front of their aging white audience to scare them about social progress in the United States.

The latest attack on Omar is almost breathtaking in its shameless bad faith. Last month, Omar gave a speech at the Council on American-Islamic Relations (CAIR) — an organization that conservatives have long demonized to begin with — in which she protested the way all Muslims are conflated with a tiny minority of people who commit acts of violence.

Last week, the right-wing noise machine plucked a single phrase from her speech, in which Omar, in her efforts to distinguish terrorists from the majority of Muslims, called the 9/11 hijackers "some people" who "did something." This phrase is being used by Republican propagandists, including Trump himself, to imply that Omar minimizes or even supports terrorism, when the opposite is true.

Ironically, the attacks on Omar proves the larger point she was making. This was the second attempt within a week to stir up faux outrage by misrepresenting Omar's comments. Earlier in the week, there was a brief effort to make hay out from Omar's description of White House adviser Stephen Miller as a "white nationalist," which was relatively fruitless because her statement was obviously true. But the right appears to have gotten some traction with this 9/11 lie, which has the appealing simplicity of feeding the widespread view among Republicans that, as Trump himself said in 2016, "I think Islam hates us."

The purpose of targeting women like Omar and Ocasio-Cortez — as well as other freshmen congresswomen like Ayanna Pressley of Massachusetts and Rashida Tlaib of Michigan — is obvious enough. The Trump voting base feels threatened by the very idea of white men sharing power with women and people of color. That these women are young and conventionally attractive only adds to the fury, as the Trump audience would prefer such women to be in the role of sex objects and assistants to men, not political leaders.

Omar makes an enticing target, because in the recent past she has made comments about Israel's lobbying power that to many people's ears veered too close to anti-Semitic stereotype. Now conservatives feel they can say whatever they want about Omar, no matter how false, because they can simply paint any Democrat who defends her against such lies as somehow anti-Semitic.

Even more important, it allows Republican propagandists to have it both ways. To mainstream journalists and liberal critics, they can pretend that they're merely "criticizing" Omar as a person, not targeting her for being a black Muslim. But they also know their own audiences don't read the story that way, but instead view it as racist demagoguery — which is why they like it.

But racism isn't necessarily the electoral slam dunk that Trump and his backers think it is. Yes, Trump ran a racist campaign in 2016 and won, but only because of tiny margins in a handful of districts. It's unsurprising that he returned to that well last year, successfully driving the media to devote enormous amounts of coverage to a small group of Central American migrants seeking asylum, that Trump frequently likened to an "invasion."

But the overt racism of the Republican campaign strategy in 2018, didn't really work. Democrats picked up 40 House seats, despite an electoral map that had been effectively gerrymandered to shut them out of power. That's because there were significant differences from 2016, when too many Americans wrote off Trump as a harmless clown  and not a serious threat to democracy. Since then, the Republicans who held power in Washington spent all their time attacking health care and passing tax cuts for the rich. And Trump's sexism is no longer just "locker room talk" but has resulted in attacks on reproductive health care and installing Brett "I Like Beer" Kavanaugh on the Supreme Court.

Perhaps most importantly, what changed during those two years is that the taboo against labeling bigotry as bigotry has faded dramatically.

In 2016, Trump benefitted from the notorious reluctance of many in the media and politics to correctly identify his behavior and attitudes as sexist and racist, instead falling back on the long-standing habit of giving conservatives the benefit of the doubt and presuming they act out of ignorance rather than malice. When Hillary Clinton broke with this tradition and called out the racist supporters of Trump as "deplorables," her truth-telling was treated as a bigger scandal than all of Trump's numerous lies.

But by 2018, huge numbers of people were fed up with pretending that bigots mean well. Full-throated denunciations of Trump's racism and sexism have become normal in a way that would have shocked people in 2016. Now that politicians and journalists feel free to call out Trump's racism and fear-mongering for what it is, I suspect that has blunted the impact of his demagoguery. The media's increasing willingness to admit that Trump's rhetoric almost always involves actual lying has helped, as well.

These attacks on Ilhan Omar are just the beginning of what will be a two-year blitzkrieg of lies and bigotry rained down on the country by Trump, Fox News and their allies. Democrats need to offer a blunt, unapologetic, forceful response that correctly identifies this behavior as racism and sexism, and calls out attempts to deny it as gaslighting. Trump and company are going to be hyper-racist no matter what. But a forceful pushback can make the road much tougher for them.

The good news is that many Democratic leaders seem to be getting the message. After an initial hesitation to defend Omar by name, House Speaker Nancy Pelosi released a statement describing Trump's comments demonizing Omar as "hateful and inflammatory rhetoric" and indicated that she would assign a security detail to Omar and her family. Multiple Democratic presidential candidates, including Sens. Bernie Sanders, Kamala Harris and Elizabeth Warren, have bluntly described Trump's language as "racism," "vilifying a whole religion" and "inciting violence" against "an entire group of Americans based on their religion."

Trump won't be slowed down by these reactions — he's continuing to attack Pelosi for failing to "control" Omar — but by correctly labeling his language, instead of hiding behind euphemisms, Democrats are raising the political price he's paying. They are also modeling courage for followers, the kind of courage that will hopefully inspire higher voter turnout in 2020.

Trump will definitely win if Democrats stand by and do nothing but offer mealy-mouthed and limp statements in response to his overt bigotry. But if Democrats can continue to show spine and fight back, they have a fighting chance of taking back the White House in 2020. And then the process of trying to clean up the racist toxin Trump has spread across America can truly begin.