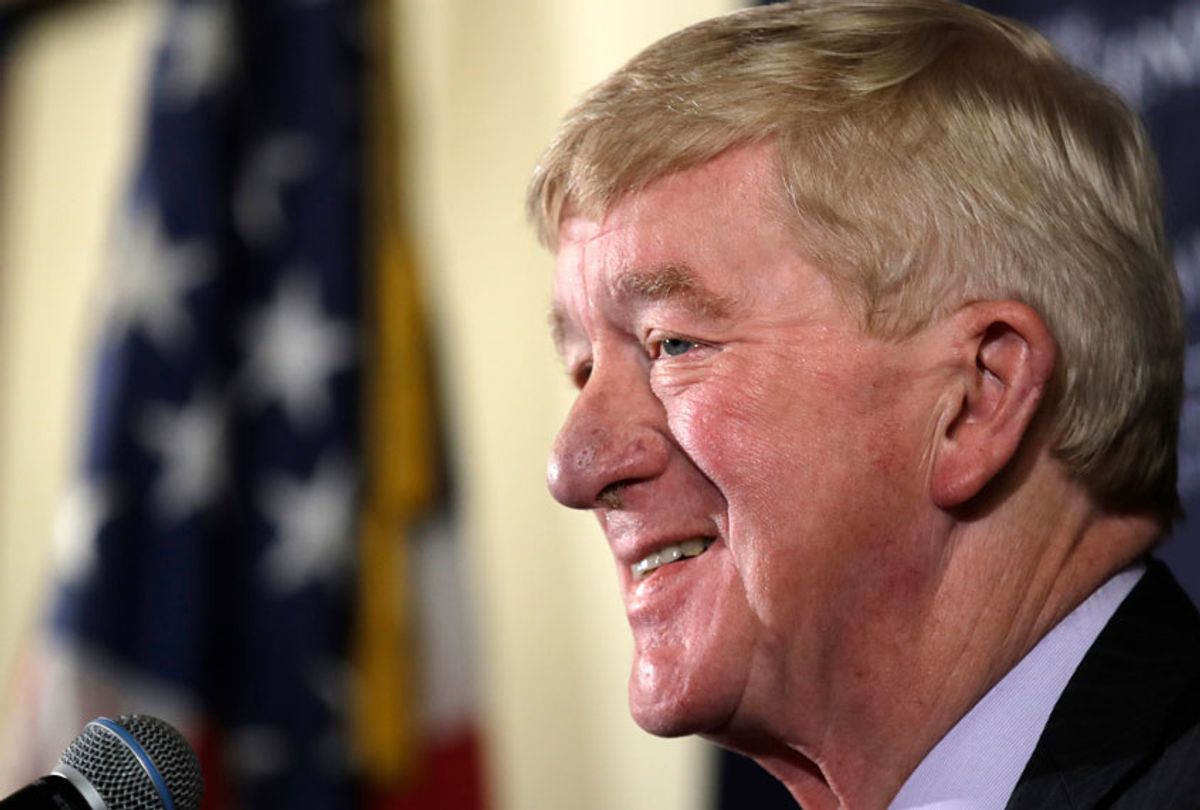 Former Massachusetts Gov. Bill Weld announced Monday that he is officially throwing his hat into the presidential ring, becoming the first Republican to challenge President Donald Trump in the 2020 race.

"In these times of great political strife, when both major parties are entrenched in their 'win at all cost' battles, the voices of the American people are being ignored and our nation is suffering," Weld, who had previously formed an exploratory committee, said in a statement.

"It is time for patriotic men and women across our great nation to stand and plant a flag. It is time to return to the principles of Lincoln: equality, dignity and opportunity for all," he added. "There is no greater cause on earth than to preserve what truly makes America great. I am ready to lead that fight."

Weld, who was the vice presidential nominee on the Libertarian Party ticket alongside former New Mexico Gov. Gary Johnson in 2016, did not mention Trump in his statement. But in a three-minute video announcing his candidacy, Weld's campaign pointed to his record as a Republican governor in a deep blue state before declaring, "America deserves better." The video then highlighted some of Trump's most controversial remarks.

Weld, who previously served two terms as the governor of Massachusetts in the early 1990s, faces significant hurdles in his quest to defeat Trump in the Republican primary. Trump's re-election campaign raked in more than $30 million in the first three months of 2019 and has more than $40 million cash on hand. A recent Gallup survey found that 89 percent of Republicans have a favorable view of the president.

"The president is in a vastly stronger position at this point than any previous incumbent president running for reelection, and only continues to build momentum," Trump campaign manager Brad Parscale said in a statement on Monday, unrelated to Weld's announcement.

The Republican National Committee has taken steps to prevent a primary challenger and unanimously voted in January to throw the party's "undivided support" behind Trump. RNC Chairwoman Ronna Romney McDaniel backed the president earlier this year, warning possible primary challengers to Trump that they would "lose horribly."

Although Weld last won an election in 1994 and has appeared to drift from the Republican Party in recent years — by serving as the vice presidential candidate for the Libertarian Party, calling climate change a threat to the nation and supporting the use of medical marijuana for veterans — he appears eager to present conservative voters a moderate alternative to Trump in 2020.

Weld, who served in former President Ronald Reagan's administration for seven years, including five years as the U.S. attorney for Massachusetts and the head of the Justice Department's criminal division, described himself as "a Republican who works across the aisle and gets things done."

"Donald Trump is not an economic conservative," he said in an interview with CNN on Monday. "He doesn't even pretend to be. The country deserves to have some fiscal constraint and conservatism."

Weld's team appeared to acknowledge it would be incredibly difficult for Weld to actually defeat Trump in the 2020 Republican primary but insisted conservative voters deserve a choice.

"It is a long shot, but it's certainly less of a long shot than Donald Trump was when he announced. And no one thought he was serious," Stuart Stevens, Weld's strategist and adviser since the 1980s, told the Washington Post. "Tonally, he's going to run a very different campaign. He's not mad at the world. He's not a victim."