Sanders discussed the tax returns he released before the program, while Trump continues to refuse to reveal his own 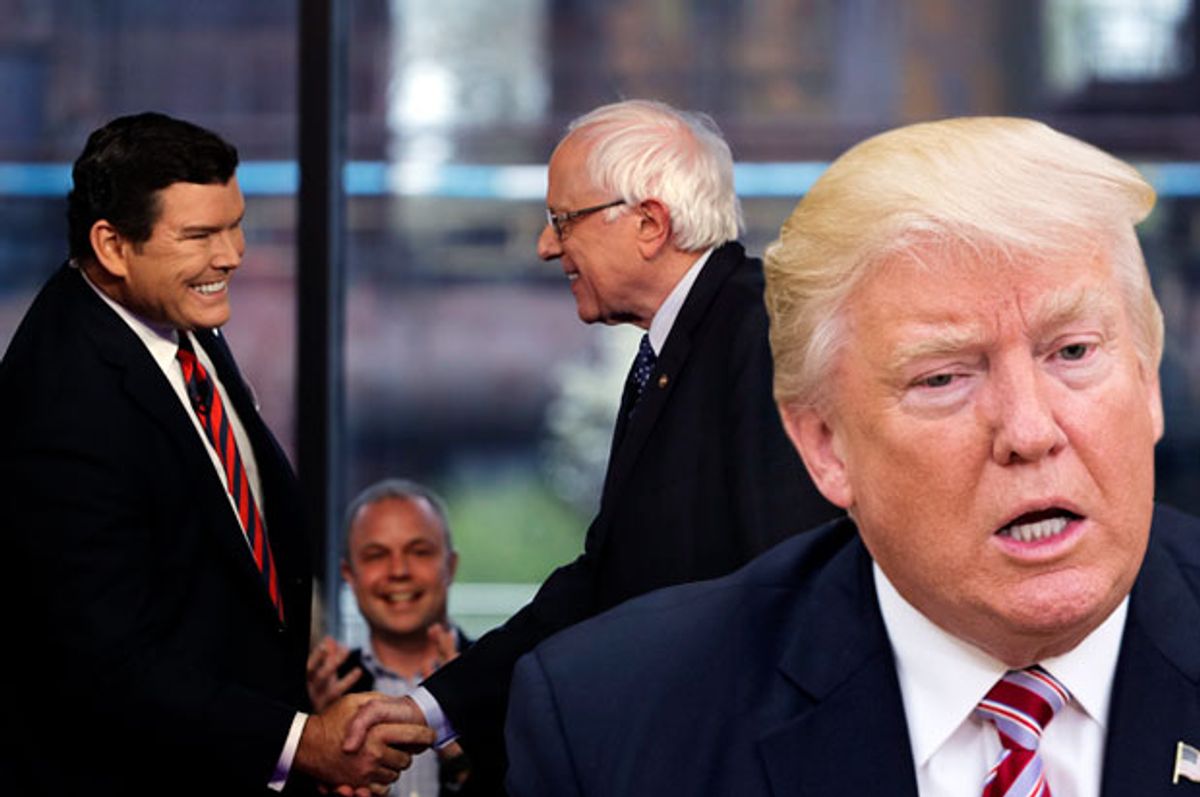 "So weird to watch Crazy Bernie on @FoxNews. Not surprisingly, @BretBaier and the “audience” was so smiley and nice. Very strange, and now we have @donnabrazile?" the president tweeted Tuesday morning.

Bret Baier, who co-hosted the town hall along with his Fox News colleague Martha MacCallum, responded with a tweet saying, "Thanks for watching Mr. President - we’d love to have you on a town hall soon — or even an interview on @SpecialReport —it’s been awhile. We cover all sides."

Tax returns and Sanders' populist message took center stage at Monday's town hall. The Vermont senator released ten years of tax information minutes before he hit the stage. The president, for his part, has continued to refuse to release his own.

"Come on, I paid the taxes that I owe," Sanders told Baier and MacCallum when questioned Sanders about his returns. "And by the way, why don't you get Donald Trump up here and ask him how much he pays in taxes? President Trump watches your network a little bit, right? Hey, President Trump, my wife and I just released 10 years. Please do the same."

Regarding the question of his income, Sanders later added, "This year, we had $560,000 in income. In my and my wife's case, I wrote a pretty good book. It was a best seller sold all over the world, and we made money. If anyone thinks I should apologize for writing a bestselling book, I'm sorry, I'm not going to do it."

When Baier asked Sanders whether the success of his 2016 book "Our Revolution" proved the validity of "the American dream," the Democratic candidate demurred.

"No," Sanders responded to Baier. "What we want is a country in which everyone has an opportunity . . . A lot of people don't have a college degree. A lot of people are not United States senators."

As Baier polled the studio audience about Sanders' support of "Medicare for All," its vocal enthusiasm for the plan seemed to overshadow the Fox News host's follow-up question.

"I want to ask the audience a question. If you could raise your hand here, a show of hands of how many people get their insurance from work, private insurance right now?" Baier asked. "Now of those, how many are willing to transition to what the senator says, a government-run system?"

After a majority of audience members appeared to raise their hands, Baier attempted to reframe the question by asking Sanders, "There’s 180 million people on private insurance, and they would be lost, right?"

"Fair question. I know it’s what the right wing throws out, so let me answer it, all right? Millions of people every single year lose their health insurance, you know why? They get fired, or they quit and they go to another employer. I was a mayor for eight years, and you know what I did? What probably every mayor in America does is you look around for the best insurance program, the most cost-effective insurance. You change insurance. Every year, millions of workers wake up in the morning, and their employer has changed the insurance that they have. Maybe they liked the doctors. Some people are nodding their heads. OK. So this is not new – every year. Now what we’re talking about actually is stability – that when you have a ‘Medicare for All,’ it is there now and will be there in the future."

Sanders also answered a question about whether he supports abortions at the moment of birth by saying, "I think that happens very, very rarely, and I think this is being made into a political issue. At the end of the day, I think the decision over abortion belongs to a woman and her physician – and not the government."

Watch Sanders tackle the subject of "Medicare for All" below: