Don't forget that Jaime Lannister pushed Bran Stark out of a window. Can the North forgive? 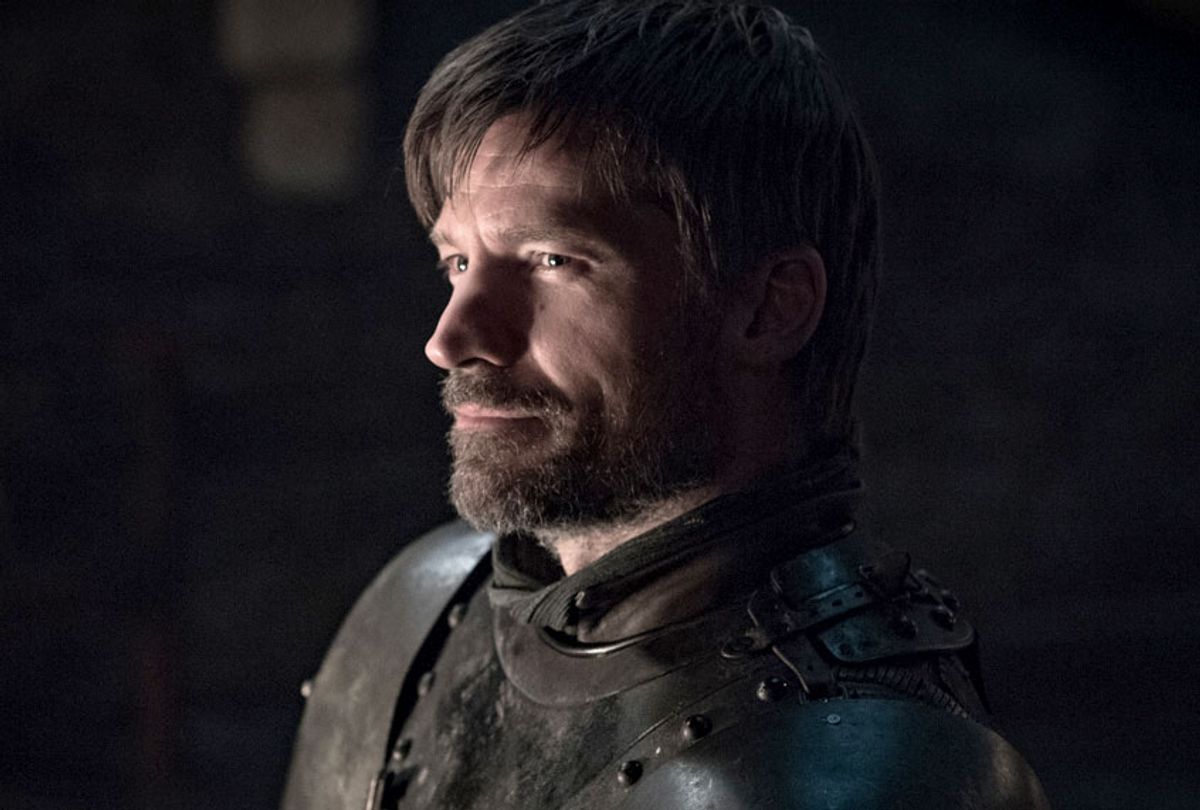 Disguised under a dark hood, Jaime Lannister rode into Winterfell undetected during the premiere episode of the final season of "Game of Thrones," enjoying a brief moment to take in the scene at the Northern castle — a place he had visited eight years ago, before the wars and deaths that ravaged Westeros throughout the HBO series — before the action of the series endgame is put into motion. In season 8, Jamie is older, grayer, more scruffy — and minus one hand; given what he's been through, and what everyone has been through, his the sense of depletion reflected in his posture and gaze felt more than appropriate to the occasion.

His arrival in the North means Jaime has finally defected from his ruthless sister, lover and current Queen of the Seven Kingdoms — illegitimate or not — who seems to be carrying his child. But the progress he has made toward redemption by switching allegiances — and his awakening to the larger threats against humanity — is immediately compromised when his eyes meet the scathing stare of Bran Stark.

When Jaime locks eyes with Bran, looking older and wiser himself — and using a wheelchair, after Jaime left him paralyzed after pushing him out of a window seven seasons ago — the Kingslayer's eyes widen in disbelief, and perhaps terror. Lannister's lips part, but he is rendered speechless at the sight of Bran. The episode ends on that intense stare, and it feels like even days later, their eyes would likely remain locked. (Bran doesn't seem in a hurry to leave that courtyard, at least.)

Though we began our relationship with Jaime Lannister witnessing his callous attempt to murder an innocent child for accidentally seeing Jaime and his sister Cersei Lannister engaging in incestuous intimacy, Jaime has occupied a rare perch in the "Game of Thrones" universe — he's one of the few characters on a redemption journey. As actor Nikolaj Coster-Waldau told Variety of his journey, "I think 'change' would be one word. He had to adapt and in many ways rediscover his identity. At the same time there is the core of what’s left of his dedication to his partner in life, Cersei. He says in episode one, 'The things I do for love,' and then he does something truly horrific. That is still at his core, I think — that he will do anything for the people close to him."

Jamie does do appalling things, but there is a sense from the beginning that he's not necessarily an evil or conniving person deep down in the same way his sister or father Tywin is. Rather, Jaime's primary weakness is his unbridled love for Cersei.

Nevertheless, Jaime's character remains legitimately stained by what he did to Bran — an action which did much to sow deep division and animosity between the North and King's Landing, and contributed to the endless war that followed. Shoving Bran out of that high window also signaled that Jaime's integrity, such as it is, has limits. As much as Jaime might have believed in the concept of honor and bravery, as an exceptional and decorated fighter he would always choose violence, in the words of Cersei, if the righteous alternative was in opposition to his loyalty to his sister and to protecting their (not so) secret affair.

But in season 7, we saw Jaime finally questioning that love, culminating with his departure from King's Landing. Cersei pretty much immediately ordered his murder for that betrayal, which brings us to his reunion with Bran in season 8. Jaime's break from Cersei — who has somehow managed to become even more barbarous — is a major shift because now for the first time, Jaime is more committed to saving humanity than he is to safeguarding his love for one woman. This is true growth. And seeing Bran at Winterfell could potentially undo everything for Lannister.

"First of all, I don’t think wheelchairs are a normal thing in Westeros," Coster-Waldau told Entertainment Weekly, of what his character was feeling during the eerie closing scene. "I think it’s like: 'What the hell?' and then, 'Oh my god, that’s the kid.' I think he knows Bran didn’t die, but he doesn’t expect to meet him."

"His mission changes once again," he continued. "It goes from: 'I know my brother Tyrion is there and I’m going to fight the good fight' to 'I’m in deep sh– now.' Because this is the Lord of Winterfell that I tried to kill and I’m sure he wants revenge. That’s what Jaime expects."

Jaime had to enter Winterfell knowing he was going to be facing people who would be less than friendly towards him. He murdered Daenerys' father, after all, an act of rank-breaking that earned him the title of Kingslayer. But perhaps he assumed all was forgiven after he pledged to fight with Dany, Jon Snow and the North, and their allies against the Army of the Dead. His brother Tyrion is the Hand of the Targaryen Queen, after all, and he must figure that loyalty counts for something too.

But it was abundantly clear based on Jaime's reaction that he was not expecting to come face to face with Bran, who had recently returned to Winterfell after venturing beyond the wall and becoming the Three-Eyed Raven. Throughout the episode Bran, waited outside "for an old friend," as he said, and in the last scene we realize that's most likely Jaime Lannister. Bran's intentions whe it comes to Jaime are less clear. As the Three-Eyed Raven, does he recognize Jaime's internal evolution? Does he even care? And will it matter in the end as they attempt to fight off everything that's coming to end them?

Bran only grows stranger and colder as the Three-Eyed Raven and thus more and more unpredictable. The only sensible thing he says in the season 8 premiere is that they are running out of time, and the politics over the Iron Throne are insignificant now that the Night King and his growing army have bulldozed through the wall and are heading their way. The North is running out of time. But before Jaime fulfills his promise to fight for the living, it's clear from the locked gaze he and Bran share that first he has some things to answer for.