Disgraced former Alabama judge, who lost to Sen. Doug Jones in 2017, is likely back for another round 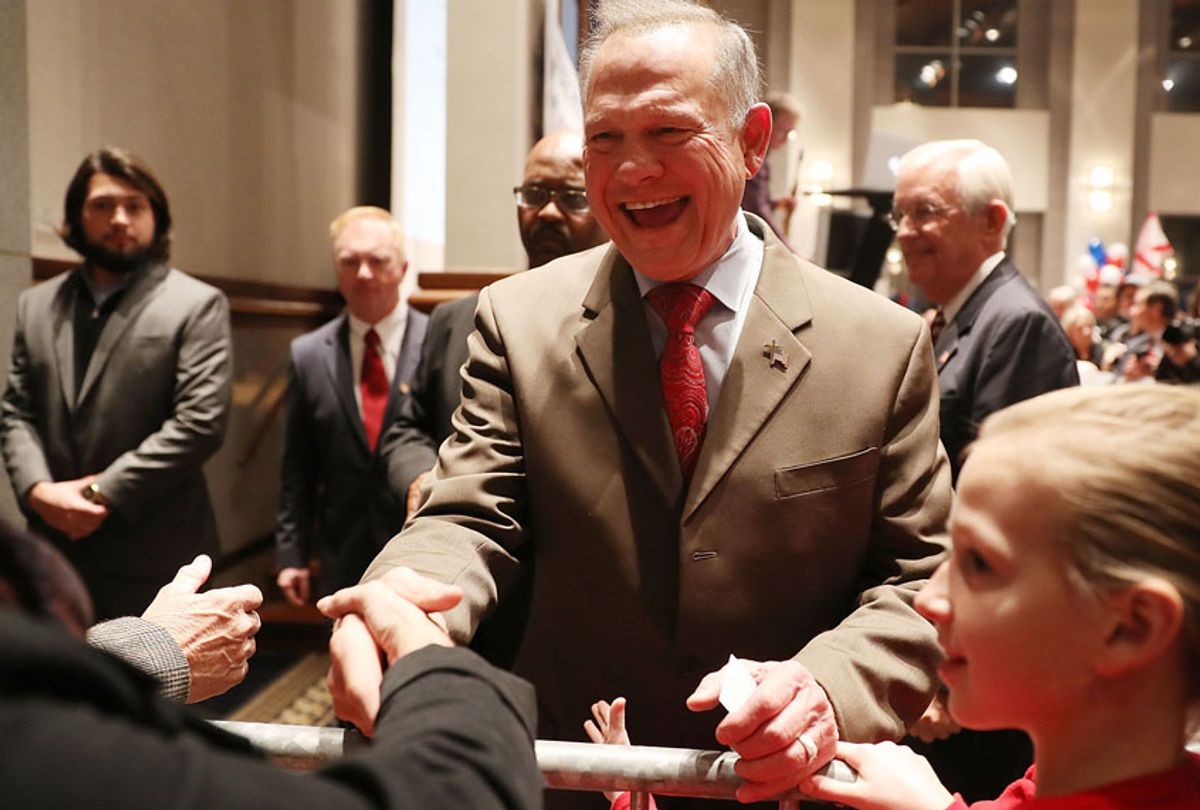 Roy Moore arrives for his election night party in the RSA Activity Center on December 12, 2017 in Montgomery, Alabama. (Getty/Joe Raedle)
--

Doug Jones is by far the most vulnerable Senate Democrat seeking re-election in 2020, but he is certain to be heartened by the news that Roy Moore, the former Alabama Supreme Court chief justice accused of sexual misconduct against multiple underage girls, is currently the frontrunner to land the Republican nomination. It seems Republicans in Dixie would rather elect a credibly accused pedophile than some other Republican.

Mason-Dixon released a poll on Thursday that shows while 45% of voters surveyed approve of Jones’ performance thus far in the Senate, 50% want to replace him with a Republican in 2020. Jones appears to be buoyed mostly by the support of black Alabamians, who helped him beat Moore by the narrowest of margins in 2017. While 70% of white voters said they would vote to replace Jones, 84% of black voters said they would vote to re-elect him. Even after entering the Senate, Jones, a former civil rights attorney, has continued to advocate explicitly for racial reconciliation and against white supremacist violence.

"I think we have to continue to address it straight up, but I also think we have to address some of the underlying causes, and some of the underlying causes are public officials and others who feed that," he told Salon in a recent interview with executive editor Andrew O'Hehir. "When you don't condemn, in the strongest possible terms, these kind of actions instead of just saying 'our thoughts and prayers' and 'I deplore this' or whatever, you have to really work to lead."

Perhaps such an explicit focus on race in a state haunted by its history of racist violence, lends to low-levels of support for Jones from white Alabamians. Meanwhile, the level of support for Moore among white voters remains in line with the 68% of them who supported him in 2017, despite multiple allegations of inappropriate or sexual contact with teenage girls. A CBS News poll taken right after that election found that 71 percent of Republican voters believed the allegations were false. Moore has continuously claimed that the election was “stolen” from him. And it appears that at least amongst many Republican voters in Alabama, he remains a martyr.

According to the Mason-Dixon poll out this week, Moore once again sits far ahead of other announced and unannounced GOP candidates, including longtime Republican Rep. Mo Brooks. In a field of six named candidates, Moore -- who won the Republican primary for a special election in 2017 to fill the seat of Jeff Sessions, Donald Trump's first attorney general -- leads the pack by a wide margin with 27% of voters surveyed statewide supporting his bid. His closest GOP opponent is Brooks, who has the support of national conservative groups like Grover Norquist’s Club for Growth but has yet to officially enter the race and only garners 18% support.  Rep. Bradley Byrne — one of only two currently announced GOP contenders — pulls about 13% support. A quarter of those surveyed said they were undecided. Perhaps most notably, among Republican women voters, Moore is by far the most popular GOP candidate, at 31% support.

“His current lead is largely a result of his name recognition advantage over others in the field,” the poll’s authors said of Moore. Only 29% of Republican voters in the state view him unfavorably.

In an overwhelmingly red state like Alabama — where Donald Trump won almost 63 percent of the vote in 2016 — the Republican primary is close to being the general election. If Jones can win twice in three years, it will be the rarest of upsets. In 2017, Moore prevailed over appointed Republican Sen. Luther Strange, even though the latter had been endorsed by Trump (albeit without much enthusiasm).

There are more than 10 months until the Republican primary next March 2, but Moore’s team is clearly gearing up for another Senate run. “I’m seriously considering it,” Moore recently told a Christian radio station. His son Caleb has already started fundraising on his father’s behalf, launching a PAC called Conservative States of America or CSA, an acronym with special meaning in the South. (As in "Confederate States of America.")

Trump’s popularity in Alabama and straight-ticket voting would, under normal circumstances, that whichever Republican is nominated will defeat Jones, no matter how much Alabamians like him. Roy Moore, with his unique ability to stir up national controversy and drive away both donors and voters, may deny  Alabama Republicans of the one thing they want most.