Attorney General Bill Barr is not actually Trump's defense attorney. But he sure played that role on TV! 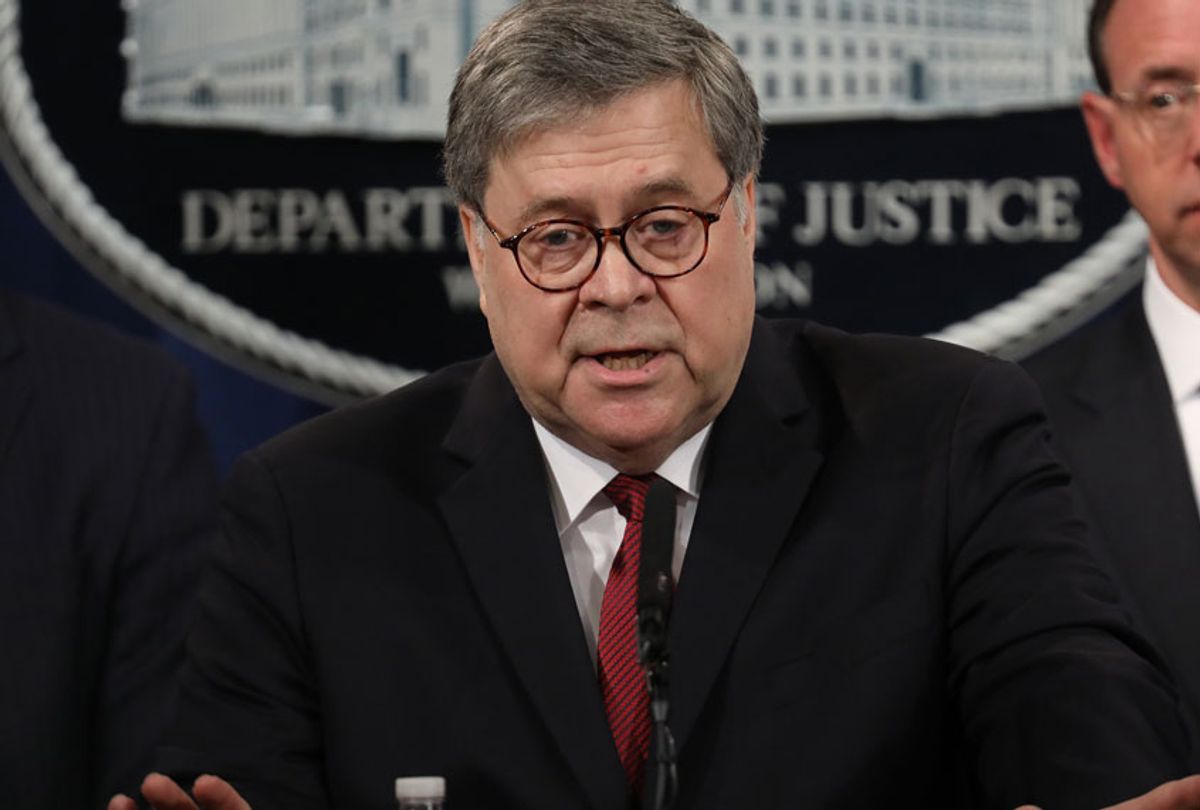 U.S. Attorney General William Barr speaks during a press conference on the release of the redacted version of the Mueller report at the Department of Justice April 18, 2019 in Washington, DC. (Getty/Win McNamee)
--

"Attorney general" may be William Barr's technical title, but after Thursday morning's press conference on the Mueller report and its underlying questions -- whether Donald Trump and his campaign colluded with a Russian criminal conspiracy to undermine the 2016 election -- it's clearer than ever why Barr was hired. His talents as a spinmeister are impressive.

Barr held his press conference hours before there was even a public version of special counsel Robert Mueller's report, which was not published until just after 11 a.m. Eastern time. This was a masterstroke, ensuring that Barr's narrative — which was unsurprisingly flattering to his boss, the president of the United States — filled the informational void left by a report no one had read yet.

The press conference itself was another demonstration of Barr's competence, or even perhaps genius, at villainous behavior. Leaning heavily on lawyerly language — insisting that it only counts as "collusion" if Trump campaign members were directly involved with people on the Russian government's official payroll, for instance — Barr created an elaborate justification for the punchline that was tailor-made to please Trump and fit into cable news chyrons and newspaper headlines: "No collusion."

Of course we know that isn't true, even without the Mueller report. We know, for instance, that Donald Trump Jr., Jared Kushner and Trump's campaign manager, Paul Manafort, took a meeting with Russians who were theoretically linked to Vladimir Putin's government — even if they weren't technically on the payroll — for the explicit purpose of a quid pro quo discussion of "dirt" on Hillary Clinton in exchange for sanctions relief for Russian oligarchs. (Which is what the euphemism "Russian adoptions" means, because this situation never stops being weird.) We also know that Trump literally went out in public in the summer of 2016 and asked Russian hackers to attack Hillary Clinton's email servers, which they immediately did.

We also know that Trump has routinely lied about what he knew about the extent of Russian interference, since he was briefed on it in August 2016 and has repeatedly pretended he was not.

One of the more interesting word games Barr played during the press conference was around the legal questions regarding the hacking and publishing of emails stolen from Democratic officials during the campaign, in an effort to stoke conspiracy theories about Hillary Clinton and depress Democratic voter turnout. (As anyone who attended the 2016 Democratic National Convention could tell you, that effort was quite successful in terms of sowing such ideas among Bernie Sanders supporters.)

Barr made an elaborate argument that while the hacking itself was illegal, publishing the resulting documents — or perhaps conspiring to publish them — was not. But until we read the report itself, it's hard to say if Barr's interest in that narrow legal point reflects some unsavory revelations regarding who was part of those publishing efforts.

On the obstruction question, Barr dispensed with even the pretense that he's the nation's top law enforcement official and instead openly acted as Trump's defense attorney. He used his time at the podium to construct a narrative to explain away the lengthy and public, obstruction campaign that Trump conducted, one that involved firing FBI director James Comey, hounding former Attorney General Jeff Sessions out of office and intimidating witnesses who might testify against him.

Since intent is crucial to an obstruction determination, Barr spun a yarn about how this guilty-as-hell-seeming behavior from Trump had an innocent motive: Trump was just stressed out, you guys! All he wanted was to president in peace, but here were all these investigators with all their questions and all these journalists and really, how dare they! Barr stopped short of using the dumb phrase that Trump has been trying to make a thing — "presidential harassment" — but that was clearly the narrative he was adhering to with this sob story about a man who feels beleaguered by requests from transparency from the people he supposedly serves.

"Despite the ‘see no evil, hear no evil, speak no evil’ spin from the Attorney General, we cannot overlook the fact that the investigation has already led to 199 criminal charges, 37 indictments or guilty pleas, and 5 prison sentences," Karen Hobert Flynn, the president of Common Cause, noted in a press release after Barr's press conference.

Despite Barr's claims to the contrary, none of his behavior suggests a man who's interested in putting Americans' fears to rest about the interference of Russian forces in the election or Republican willingness to let it happen. (Indeed, the White House continues to collude with the Russian government, if only passively, by neglecting to support efforts by government agencies to prevent such shenanigans in the 2020 election.) Instead, Barr appeared focused on two goals: Provide Fox News a narrative to sell to Republican voters and intimidate the media into pulling back from the Russian interference story.

But there's no chance that anyone actually changes their mind about what they think happened between Russia and the Trump campaign based on anything that happens on Thursday. (Including the report itself, which is now available.) Barr's blatant whitewash will only make liberals more likely to believe Trump is hiding  something sinister, while Republican voters will either back the "no collusion" storyline or admit, at least in private, that they don't even care if there was a conspiracy or not.

The one silver lining in all this is that now that the Mueller waiting game is over, the Democrats who control the House can move onto dealing with the extensive and likely criminal corruption that the Trump administration displays in so many ways: The campaign finance crimes, the tax fraud, the way the Trump hotels and Mar-a-Lago are unsubtle money-laundering enterprises, the reported demands that government officials to break the law, and, God willing, the numerous sexual assaults that Trump bragged about on the infamous "Access Hollywood" tape.

But now the report is finally here. Let's read it.