Former White House counsel confirms Trump tried to force him to fire Mueller, then told him to change his story 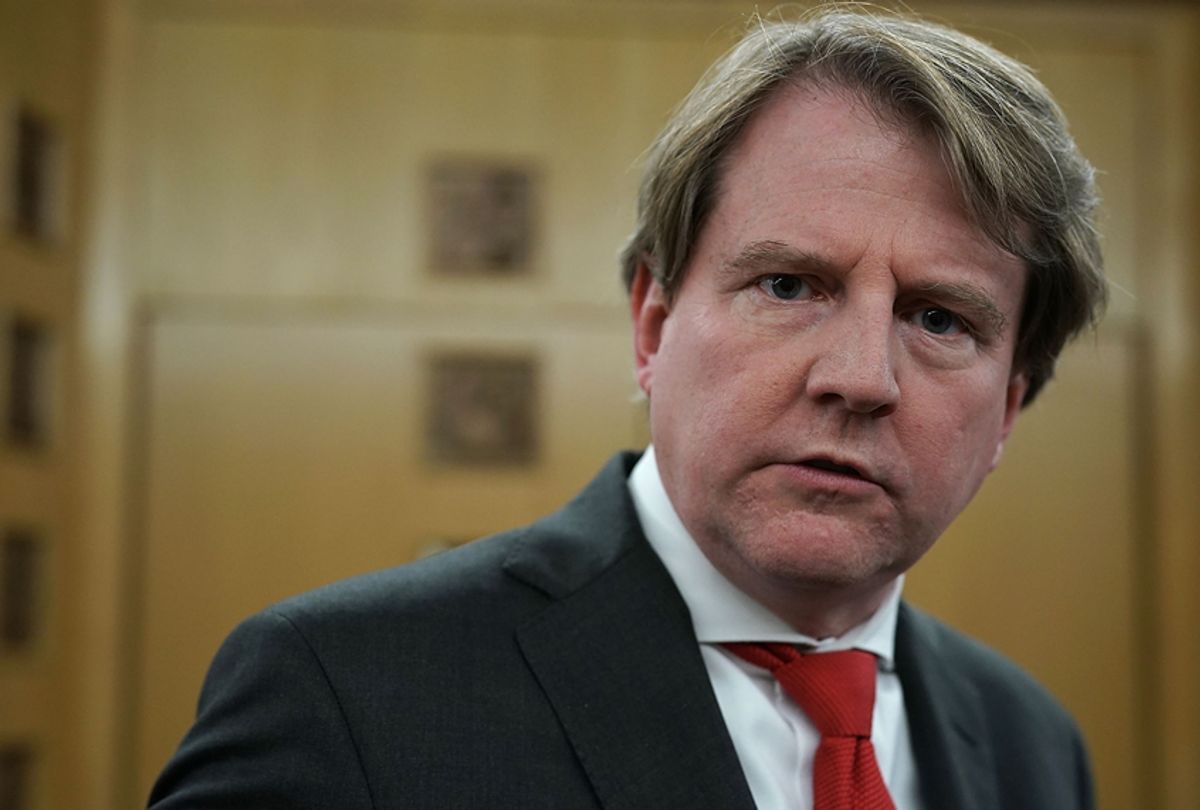 Top former Trump aides testified to special counsel Robert Mueller that President Trump ordered the firing of Mueller and tried to get then-Attorney General Jeff Sessions to limit Mueller’s investigation, according to the redacted version of the special counsel’s final report, released on Thursday.

Former White House counsel Don McGahn testified that Trump called him in June 2017 and “directed him to have the Special Counsel removed,” according to the report. McGahn told Mueller's investigators that Trump called him twice and both times directed him to call Deputy Attorney General Rod Rosenstein and “say that Mueller had conflicts that precluded him from serving as Special Counsel.”

“You gotta do this. You gotta call Rod,” McGahn recalled Trump saying.

McGahn was “perturbed” by the request and “did not intend to act” on it, according to the report. He and other Trump advisers believed that the president’s “asserted conflicts were ‘silly’ and ‘not real.’”

McGahn likened the request to the legendary “Saturday Night Massacre” of 1973, when Richard Nixon’s attorney general and deputy attorney general both resigned after refusing Nixon's order to fire special prosecutor Archibald Cox, who was investigating the Watergate scandal. Cox was ultimately fired by the third-ranking official at the Justice Department, Solicitor General Robert Bork, which led to Nixon's forced resignation the following year.

McGahn told the special counsel that Trump called him a second time and told him, “Mueller has got to go.” McGahn decided to resign rather than comply with Trump’s request, but did not submit a resignation letter to the White House.

Former White House chief of staff Reince Priebus testified to the special counsel’s team that McGahn called him and said that the President had asked him to “do crazy shit.”

Priebus said he and then-chief strategist Steve Bannon persuaded McGahn to come back to work and Trump later dropped the issue. The report suggests Trump may have dropped the issue after former New Jersey Gov. Chris Christie advised him against it.

But Trump was not done. According to former Trump campaign manager Corey Lewandowski, who did not have a formal role in the White House, Trump asked Lewandowski to deliver a message to then-Attorney General Jeff Sessions, who had recused himself from overseeing the investigation of possible Russian collusion.

Trump told Lewandowski that he wanted Sessions to give a speech publicly stating that Trump was being “treated very unfairly” and “shouldn’t have a special prosecutor/counsel [because] he hasn’t done anything wrong.”

“He didn’t do anything wrong except he ran the greatest campaign in American history,” Trump wanted Sessions to say, according to notes transcribed by Lewandowski.

Trump also wanted Sessions to limit the scope of Mueller’s probe under the guise of protecting future elections, according to Lewandowski’s notes.

Trump told the former campaign manager that Sessions would be the “most popular guy in the country” if he delivered the remarks.

At a subsequent meeting, Trump told his former campaign manager that if Sessions did not meet with Lewandowski, Sessions would be fired.

Rick Dearborn, then a top White House aide, was asked to deliver that message to Sessions at a meeting in July. Dearborn told the special counsel the message “definitely raised an eyebrow” and made him “uncomfortable.” He said he did not actually follow through with delivering the message.

The following year, in January 2018, news outlets reported on Trump’s order to McGahn to fire Mueller.

Trump, according to the report, tried to persuade McGahn to issue a false statement that those reports were inaccurate. McGahn refused multiple times, he said.

Trump pressed McGahn on the issue. “Did I say the word ‘fire’?” the president asked, according to the report.

“What you said is, ‘Call Rod [Rosenstein], tell Rod that Mueller has conflicts and can’t be special counsel,” McGahn replied.

“I never said that,” Trump claimed, according to McGahn’s recollection.

Trump again pressed McGahn to “do a correction” and McGahn refused. Then-chief of staff John Kelly described the meeting as “a little tense.”

In summarizing Trump’s attempts to obstruct justice, Mueller wrote that the efforts were “mostly unsuccessful” but “that is largely because the persons who surrounded the President declined to carry out orders or accede to his requests.”

Mueller determined in his report that Trump’s team did not conspire with Russia to hack emails from the Democratic Party or Hillary Clinton's campaign, although the report also noted that Trump aides deleted communications related to the events probed in the investigation. Mueller also determined that he could not accuse Trump of obstructing justice, despite investigating 10 incidents of possible obstruction of justice, because Justice Department rules precluded him from indicting the president.