When did vaccines become politicized? Amid a measles outbreak, suddenly Republicans support anti-vaxxers 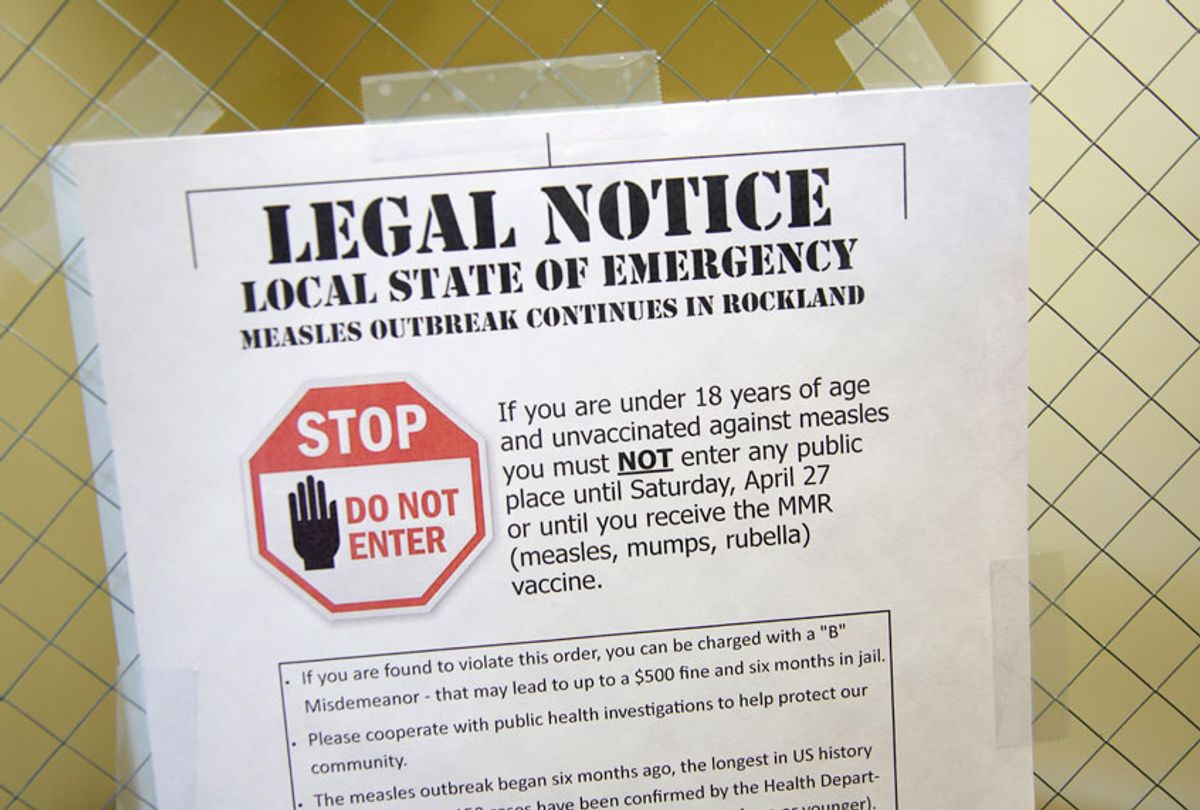 A sign explaining the local state of emergency because of a measles outbreak at the Rockland County Health Department in Pomona, N.Y., March 27, 2019. (AP/Seth Wenig)
--

Republicans are opposing Democratic legislative efforts to tighten childhood vaccination laws across the country despite a rising number of measles outbreaks around the United States.

Bills to restrict exemptions for immunizations passed through legislative committees in Washington, Colorado and Maine this month without a single Republican supporter, Politico reports. Washington is currently dealing with one of the biggest measles outbreaks in the country. Democratic lawmakers are seeking to limit immunization exemptions on religious and philosophical grounds.

Congressional Republicans like Sen. Rand Paul of Kentucky have also come out against mandatory vaccines. While there are certainly those on the left who oppose vaccines, like activist Robert F. Kennedy Jr., the anti-vaxxer movement has been heavily criticized by Democrats while being praised by President Trump. Trump wanted Kennedy to lead a White House commission on vaccine safety before ultimately scrapping the plan, Kennedy told The Daily Beast.

Though Trump has not been as outspoken on vaccines as president as he was in the past, he has repeatedly falsely suggested that vaccines cause autism. “Massive combined inoculations to small children is the cause for big increase in autism,” he wrote in 2012. “Autism WAY UP -- I believe in vaccinations but not massive, all at once, shots. Too much for small child to handle. Govt. should stop NOW!” he wrote in 2014.

Officials are worried they are “three Trump tweets away” from the issue becoming even more polarized, according to MIT political scientist Adam Berinsky.

“There’s a credulity gap between the parties in regard to science that wasn’t there 25 years ago,” Berinsky told Politico, which noted that right-wing media figures like Tucker Carlson, Rush Limbaugh and Alex Jones have voiced skepticism about vaccinations. At least three Republican gubernatorial candidates publicly voiced skepticism about immunizations on the campaign trail in 2018.

In the past, the government acted swiftly when faced with measles outbreaks like the kind we are seeing now. In 1972, officials barred unvaccinated children from school during a measles epidemic. The move was seen as a success and led to efforts around the country to implement stricter vaccine laws. The federal government also responded swiftly after 89 people, mostly children, died in a measles epidemic in 1990. The government spent millions to provide vaccines to poor communities and the disease stopped circulating in the United States within 10 years. Every case since 2000 has been linked to overseas travelers who infected unvaccinated Americans who then spread the virus to others.

Some experts worry that a government response in the current political climate could do more harm than good.

“My concern is that tightening requirements through the political process risks politicizing an issue that we can't allow to be politicized if we're going to maintain public health,” University of Michigan political scientist Brendan Nyhan told Politico.

Many Republicans have said they support vaccinations but oppose government mandates to require them. Other Republicans have rejected the idea that anti-vaxxers should be able to put others at risk as a matter of personal liberty.

Sen. Bill Cassidy of Louisiana, who is a physician, hit out at Paul’s claims that requiring children to be vaccinated to attend school would violate personal liberty for the “false sense of security” at a hearing last month. (In fairness, Paul is himself an ophthalmologist.)

“I have seen people who have not been vaccinated … who have ended up with terrible diseases for no other reason than they did not understand vaccination was important,” Cassidy said, later adding, “The requirement is just that you cannot enter school unless you’re vaccinated. Now, if you’re such a believer in liberty that you do not wish to be vaccinated, then there should be a consequence, and that is that you cannot infect other people.”