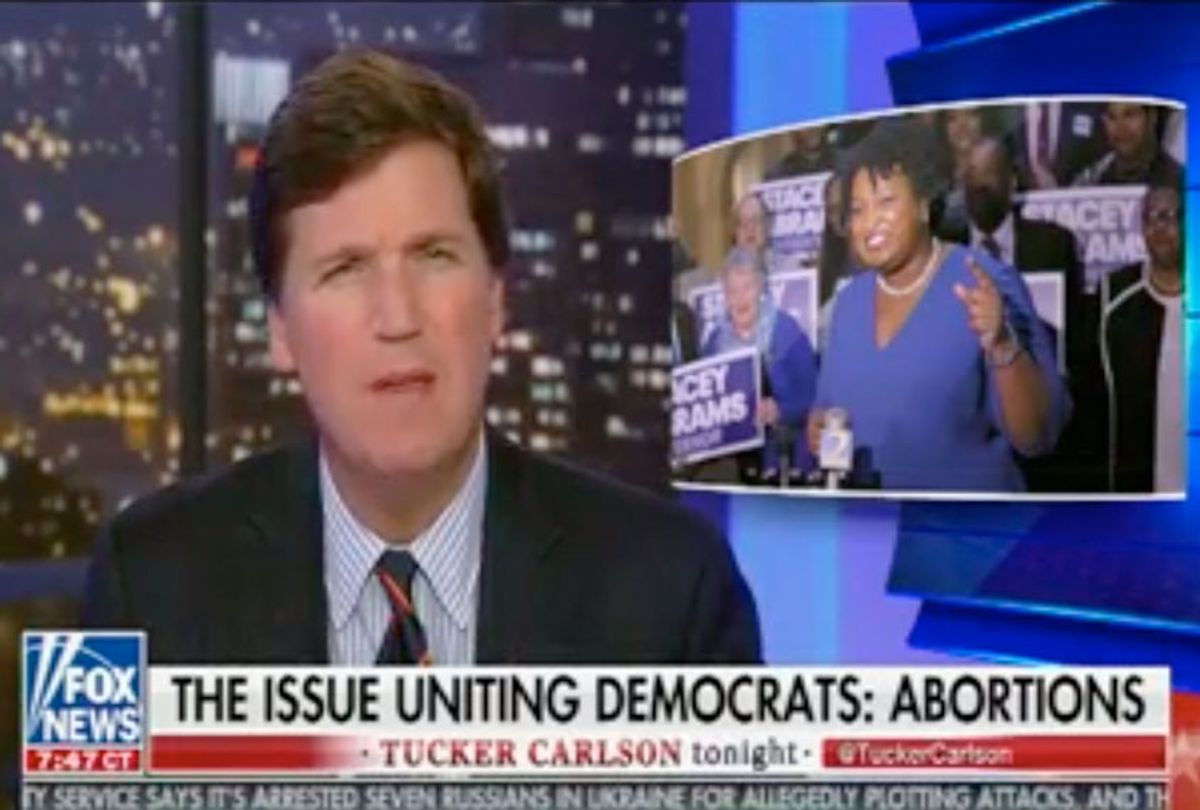 Fox News anchor Tucker Carlson made the claim Wednesday night that the Democratic Party "loves" abortion and "wants more of it."

"Well, not too many things genuinely unite the Democratic Party. One that does, though, is abortion," Carlson said in a monologue. "The party loves it, wants more of it, up until birth, maybe a little bit after, if possible."

He then cut to clips of various Democratic presidential candidates discussing abortion. Sen. Cory Booker of New Jersey said that "generations from now our children and grandchildren will wonder, 'What did we do? What did we do when they were trying to take away a woman's right to control her own body?'" Sen. Kirsten Gillibrand of New York talked about "whether we are going to be arresting women for making decisions about their bodies." Former Rep. Beto O'Rourke of Texas argued that abortion "should be a decision that the woman makes about her own body. I trust her."

Sen. Kamala Harris of California said that "what's at stake is whether or not we will continue to recognize or not a woman's right to choose." Sen. Elizabeth Warren of Massachusetts said that "women's access to safe legal abortions [are] on the line." Finally, the montage showed Sen. Bernie Sanders of Vermont saying, "The decision over abortion belongs to a woman and her physician – not the federal government, not the state government and not the local government."

"So, what's the motive behind all of this? The autonomy of women?" Carlson then asked. "That's a little abstract. It's not quite it. It's not really what is going on.

"Well, God bless former Georgia gubernatorial candidate Stacey Abrams for telling the unadorned truth about it. This is about business," the Fox News continued. "It's about making sure that women can be obedient workers, rather than harried mothers. Hurting business by restricting abortion, she says, is evil — said it right out loud. Watch."

Carlson then rolled on a clip of Abrams saying, "We have to be a state that is not only friendly to business. We have got to be friendly to the women who work in these businesses. You should not have to worry about your ability to control your bodily autonomy, because the governor has pushed such an abominable and evil bill that is so restrictive. It's not only bad for morality and our humanity, it's bad for business."

Carlson concluded, "There's something creepy about this. There are a lot of things about this topic that nobody ever says out loud. But here's one of them, because it's true, and you can look it up on the CDC website. African-American women are five times as likely as white women to get abortions in this country. In New York City, more black children are aborted than born. Now the Democratic Party will tell you forever that it loves African-Americans, but why is it pushing abortion on them?"

The issue of Democrats supporting abortion at the moment of birth was raised during Monday's Fox News town hall with Sanders in Bethlehem, Pennsylvania.

"I think that happens very, very rarely, and I think this is being made into a political issue," Sanders said in response to the question. "At the end of the day, I think the decision over abortion belongs to a woman and her physician – and not the government."

You can watch the full segment below via Media Matters: