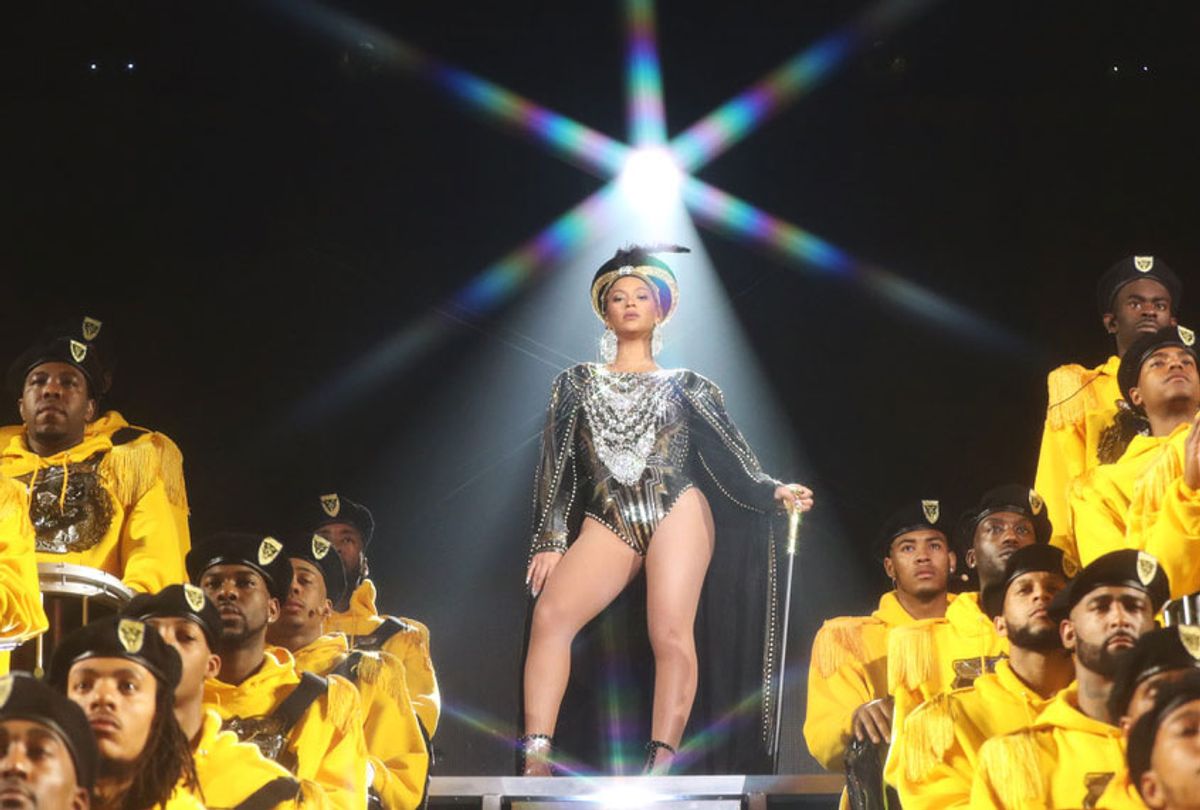 "If you surrender to the air, you can ride it." This Toni Morrison quote opens Beyoncé's Netflix film "Homecoming" about her historic and groundbreaking performance at last year's Coachella, in which she became the first black woman to headline the festival since its founding in 1999.

At more than two hours long, the film gives you a front-row seat to the iconic concert Beyoncé put on in 2018, as well as offering glimpses into the grueling eight-month rehearsal process following the birth of her twin babies and a collective sense of what this performance — centered around the vibrancy, culture and traditions of Historically Black Colleges and Universities — meant to her predominantly black orchestra, vocalists, dancers, steppers, family and fans.

Much has been written about the significance of Beyoncé's Coachella performance and the power of her amplifying the HBCU experience. As she said in the film, "When I decided to do Coachella, instead of me pulling out my flower crown, it was more important that I brought our culture."

But beyond the culture of HBCU's — of drumlines and majorette dancers and steppers and black Greek life — in "Homecoming," Beyoncé also provides the education. By interspersing quotes and voices from HBCU graduates and a range of black scholars and public intellectuals, including W.E.B. DuBois, Cornel West, Audre Lorde, Alice Walker and more, "Homecoming" marries the dynamism and breadth of culture with the diverse black intellectual tradition that define the legacies and depth of HBCUs.

As my colleague Melanie McFarland wrote, "To the wider audience 'Homecoming' is an explosion of joy that bestows drops of education here and there. To African Americans it’s a love letter to black culture and history, a celebration infused with intentional symbolism and artistry presented to the wider world with no apology." As McFarland indicates in her review, there are many allusions to DuBois' concept of double consciousness.

Making black studies, and specifically black feminist studies, accessible has been something Beyoncé has foregrounded since her 2013 stellar self-titled album. In the song "Flawless," she included a portion of Nigerian writer Chimamanda Ngozi Adichie's TED Talk, in which the novelist explains, "Feminism refers to the social, political, and economic equality of women." By magnifying the very simple definition of feminism, Beyoncé's endorsement of it became a cultural turning point for many girls and women. Of course there were plenty of people who have long heralded that identity and politics, but the stigma certainly began to ease in the mainstream, to the point now where many young women and men proudly declare it without hesitation.

As professor and writer Brittney Cooper wrote in her essay "Capital B, Capital F" in her book "Eloquent Rage," "After Beyoncé, feminism was no longer something reserved for black girls with college degrees and PhD’s. Suddenly feminism wasn’t just the province of black girls who’d read bell hooks. Armed with feminist narratives in the digital age, this black girl who’d built a singing career instead of going to college could be a feminist, too. And she would use her considerable cultural power to spread the gospel of feminism to the masses."

Beyoncé rarely gives interviews, is not very active on social media (and not at all outside of posting pictures to Instagram), and lives a very bifurcated life. She gives everything to her fans onstage and through her music — made all the more clear in the enormous sacrifices she had to make to produce and deliver the "Homecoming" Coachella performance — and yet she shares very little from her private life and of her identity beyond an entertainer. However, since at least 2013, Beyoncé has used the work and language of black scholars and other entertainers to lend more context to her artistry and politics. Thus, the inclusion of Adichie's definition of feminism in "Flawless" is a declaration of Beyoncé's own connection to the framework; using Malcolm X's voice in her 2016 visual album "Lemonade," on the specific plight of black women, is one articulation of a tension and reality that Beyoncé has experienced and witnessed.

This fascinating and radical device is deployed brilliantly and extensively in "Homecoming," in which Beyoncé does speak and brings the viewer in cautiously, pulling back a few layers into her interiority. But she uses the wisdom of DuBois and Lorde and Nina Simone and West and Morrison and Maya Angelou to offer further analysis.

"I always dreamed of going to a HBCU," Beyoncé reveals. "My college was Destiny’s Child. My college was traveling around the world, and life was my teacher." She adds to this with a DuBois quote: "Education must not simply teach work — it must teach life."

When Beyoncé shares personal details of her "extremely difficult pregnancy" and delivery, and thus reveals that her "Homecoming" performance had dual meaning — as homage to the HBCU tradition, and her own triumphant return to the stage —  she follows with the voice of Morrison describing the beauty and complexity of "home."

And perhaps most powerfully in the performance and film, Beyoncé performs the anthemic song "Freedom," and then goes into a precious rendition of "Lift Ev'ry Voice and Sing," known widely as the "Black National Anthem," punctured by the roars and rhythmic stomps of her dancers. She transitions seamlessly to the muscular single "Formation," a powerful song and video featuring many iconic and symbolic images — among them a hoodie-wearing young black child dancing in front of a row of heavily-armed and stoic police, "Stop Shooting Us" written in graffiti, and Beyoncé sinking a police car. Following the medley, Beyoncé then invokes the clarity of Nina Simone.

"I think what you're trying to ask is why am I so insistent upon giving out to them that Blackness, that Black Power, that Black, pushing them to identify with Black culture," Simone says. "I have no choice over it in the first place. To me, we are the most beautiful creatures in the whole world; Black people. My job is to somehow make them curious enough, or persuade them, by hook or crook, to get more aware of themselves and where they came from and what they are into, and what is already there, and just to bring it out. This is what compels me to compel them. And I will do it by whatever means necessary."

While Simone's sage words add broad context to the "Homecoming" performance, it also seems to me to answer to a specific gripe from Beyoncé's critics, which really ensued following the release of her "Formation" video and her corresponding Super Bowl halftime show, in which Beyoncé and her dancers wore black berets and black leather jackets in a visual reference to the traditional garb of Black Panthers.

Beyoncé became a polarizing figure to white America after that, and a frequent topic of debate and critique in right wing circles and on Fox News. Following the performance, several police unions called for a boycott of her tour. "Saturday Night Live" captured the outrage in a hilarious skit, in which white people experience an apocalyptic-like breakdown at the sudden realization that Beyoncé is a black woman.

In some ways, Beyoncé responded to this backlash by monetizing "Boycott Beyoncé" merchandise on her subsequent tour and by following it with the black feminist and artful album "Lemonade."

But "Homecoming" moves that endeavor forward. As Aisha Harris wrote for the New York Times, "the singer puts herself directly in conversation with voices from black American history . . .  Beyoncé schools her audience on the beauty of black culture, yes, but also on the importance of preserving and encouraging the legacy of historically black colleges and universities, which she stresses throughout the film."

After building on the genius of black scholars, writers and artists who came before her, Beyoncé ends "Homecoming" with a quote and message of her own. "So many people who are culturally aware and intellectually sound are graduates of historically black colleges and universities, including my father. There is something incredible important about the HBCU experience that must be celebrated and protected."

The "Homecoming" performance and documentary is singular in Beyoncé's legacy as an artist and innovator, and also an extension of the black feminist work she has long incorporated and made accessible. Beyoncé may have never gone to college, but "Homecoming" makes clear that not only is she the greatest performer in the world — if not of all time — but that Beyoncé Knowles-Carter is an educator. By making her masterclass available to anyone with a Netflix log in, she has expanded the walls of the classroom in revolutionary ways.