Read without Bill Barr's epic spin, the Mueller report's meaning is clear. Will Democrats pick up the torch? 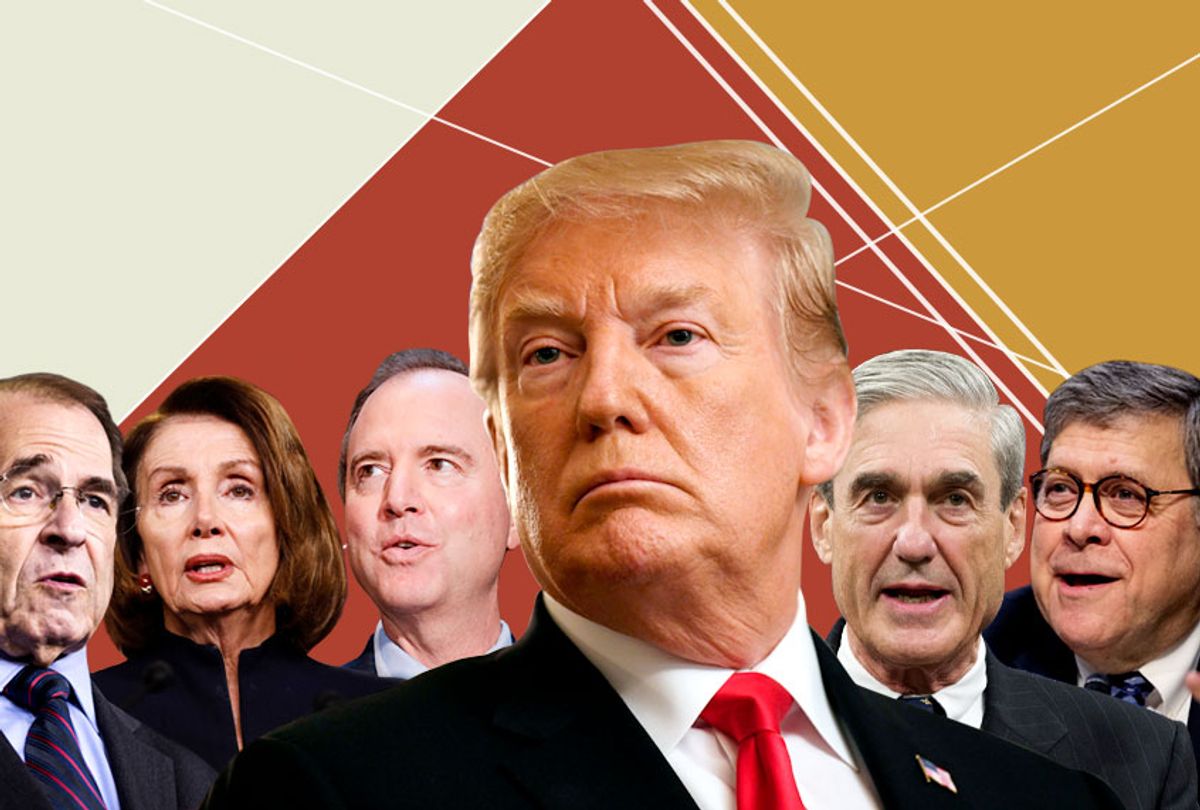 As I made my first pass through the Mueller report on Thursday I couldn't help but think about how it would have looked if William Barr had not submitted his PR statement back on March 24 and instead did what any other attorney general would have done. He could simply have released the report and had the special counsel appear before the press in person to answer questions about it. It's clear enough why Barr didn't do that: Robert Mueller is the one person in the country who has the credibility to be believed by people on both sides of the aisle, and that would not be good for Donald Trump.

Barr was obviously tasked with presenting the president's defense and providing necessary damage control, not laying out the real substance of the report. If we hadn't seen Barr's "conclusions" and his testimony before Congress and subsequent "letters," we would have looked at Mueller's report and seen it exactly for what it was: an impeachment referral.

No matter how many times Trump and his minion Barr say the words "no collusion, no obstruction" over and over again like a couple of malfunctioning robots, the report shows something very different.

The Trump campaign clearly "colluded." Its officials clearly knew a hostile power was helping them by sabotaging their rival and they never reported it to the authorities. Indeed, they welcomed it and eagerly encouraged more of it.

There is apparently no law against doing that, largely because, I suspect, no one ever anticipated that a presidential nominee for a major political party could possibly do such a thing. But it was an ethical lapse of epic proportions, and the belated recognition of that fact partially explains the president's frenzied denials that the interference and sabotage ever happened. He has shown in dozens of different ways that he believes that he can manipulate reality by repeatedly denying that it exists.

Recall that Barr's "exoneration" on conspiracy included a truncated quote from the report. The part he cut out is in bold below:

It sounds a little less like "exoneration" when you see the whole thing, doesn't it?

There is evidence in the report that Trump was eager to deliver a "reset" with Russia after the election. His motives are unclear. It's possible he believed that would be the best way to tamp down all the suspicion that he was Vladimir Putin's puppet (as Hillary Clinton memorably put it) but was too dim to understand that his secretive behavior with the Russian president and his comments to Russian officials only made him look more guilty. He demanded that the heads of the intelligence agencies go forth and testify that he was not being investigated, explaining that the probe was "messing with" his ability to work constructively with Russia. As this was at a time when he was trying to lift sanctions against the advice of virtually everyone in the world, it only raised more questions. Mueller's investigators found this so alarming they put a memo in the file to memorialize it.

If there's one thing that is crystal clear from this report, it's that the authorities were entirely justified in opening their investigation into collusion. There was so much smoke that everyone in the intelligence community and the Department of Justice were choking on it. Barr's willingness to cater to the president and the Fox News fever swamp by suggesting there was no good reason for it is entirely unjustified.

Mueller concluded that his investigation didn't establish that Trump and company conspired and coordinated with the Russians. But the detail he provided shows that Trump's dishonesty and unfitness for the office he holds is indisputable. And the second section shows that despite Barr's contention that Trump was just frustrated (as if that were a valid excuse) and couldn't have committed obstruction of justice because he had committed no underlying crime, he had ample, serious motivation to try to cover it up. In the report, Mueller says this:

But the evidence does indicate that a thorough FBI investigation would uncover facts about the campaign and the President personally that the President could have understood to be crimes or that would give rise to personal and political concerns.

He mentions a few of the possibilities, including the secret Trump Tower Moscow project managed by Michael Cohen. And the report says there are 14 criminal cases that have been referred to other DOJ offices.

The obstruction section of the report is so contrary to what Barr has said in his letters, testimony and press conference that you have to wonder if he even read it. Contrary to his insistence that Mueller threw up his hands and couldn't make a decision about whether to prosecute, the report says clearly that Mueller saw this as a question for the Congress under its constitutional authority because of the DOJ's (reasonable, in his view) policy that a sitting president cannot be indicted.

In other words, this report is Mueller's version of the impeachment roadmap that special prosecutor Leon Jaworski provided to Congress in the Watergate investigation. It lays out a devastating case of abuse of power and obstruction of justice, the worst of it only thwarted because Trump's minions refused to carry out his orders. And it shows a president so petrified of any independent investigation into his dealings that when Jeff Sessions told him that Rod Rosenstein had appointed a special counsel, he said: "Oh my God. This is terrible. This is the end of my presidency. I’m fucked."

Do those sound like the words of an innocent man?

The House Democratic leaders are so far showing themselves to be cowardly and feckless in light of this damning indictment of the president of the United States. Speaker Nancy Pelosi said weeks ago that she doesn't believe in impeachment unless it's bipartisan, suggesting that it requires a guaranteed conviction before it even starts. Majority Leader Steny Hoyer reiterated that belief yesterday saying impeachment is off the table and that the voters will decide what to do in 18 months. (He later walked that back a little bit.)

I hate to tell the Democrats, but millions of people worked themselves to the bone last year to give them a majority and it wasn't just so they could pass bills the Senate will never take up and the president will never sign. They sent them to be a check on this administration and force some accountability for Donald Trump's reckless, lawless behavior. If these leaders think that they can wash their hands of this and keep their anxious base engaged, they are mistaken.

Mueller and his team didn't write all that material out just so that Trump could claim full exoneration and carry on as if nothing happened. He wrote it with the understanding that while he could not indict Trump, Congress could and would fulfill its constitutional duties. To fail to call every one of the players in this drama up to the Hill to testify in public about these events is an abdication of that constitutional duty.

This dry recitation of the facts in Mueller's report , as dramatic as they are, was never meant to be the last word. It is an impeachment referral, and Democrats must take it up and do what the Constitution requires. If it fails, so be it. But at least the people will know that some leaders are willing to stand up in public and do the right thing. After reading page after page showing Trump and his lackeys refusing to ever do that, even once, it's pretty clear that's not an issue the Republican Party can ever run on again.