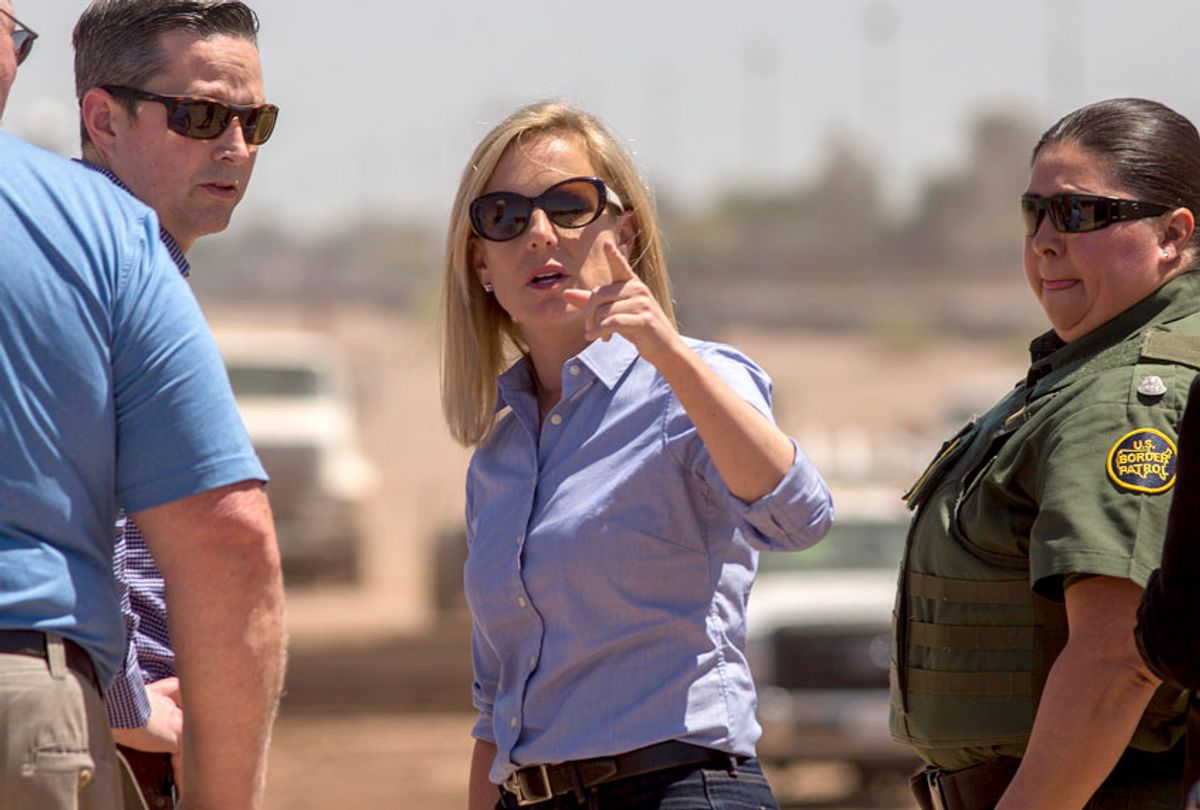 Despite Attorney General Bill Barr's epic spin campaign, it's swiftly becoming clear that the report written by special counsel Robert Mueller after an investigation into Donald Trump's campaign ties to a Russian criminal conspiracy to interfere with the 2016 election is damning indeed. Not only did Mueller catalog considerable evidence that Trump's relationship to the Russian conspiracy was, shall we say, warm, he laid out, in helpful 10-point format, Trump's various efforts to obstruct any investigation into said relationship (or into any other crimes that such an investigation might uncover).

The picture of Trump painted by the Mueller report is a man who not only doesn't hesitate before committing crimes, but thinks nothing of asking — indeed, badgering — his underlings into doing it for him. The level of entitlement Trump feels to have other people commit crimes on his behalf makes Richard Nixon look like an Eagle Scout.

Mueller's report focuses on the pattern of behavior around the Russia investigation, in which Trump repeatedly tried to use his power as president to interfere, and kept demanding that reluctant White House employees lie and obstruct on his behalf. But Trump's behavior is hardly limited to efforts to protect his own hide from law enforcement. Other media reports, particularly around Trump's behavior towards Department of Homeland Security employees, show that Trump will demand that subordinates break the law to achieve his political goals as well.

In one particularly cinematic moment, Mueller describes Trump as fuming because his first attorney general, Jeff Sessions, recused himself from supervising the Russia investigation, when Trump explicitly expected Sessions to use the powers of his office to protect Trump from legal accountability. Trump called White House counsel Don McGahn into his office and complained, "I don't have a lawyer." According to the report, the president "brought up Roy Cohn, stating that he wished Cohn was his attorney." (Cohn, a notoriously dirty lawyer with Republican ties going back to Sen. Joseph McCarthy, worked with Trump for years, until shortly before his death from HIV-related illness in 1986.)

Trump did not want to let this go, even though he was told repeatedly — even by Steve Bannon, a man whose absence of morality rivals Trump's own — that Sessions simply couldn't do Trump's dirty work in this case. Mueller reports that Trump continued brow-beating Sessions and McGahn and other employees, both about interfering with the investigation and also about covering up the attempts to interfere with the investigation.

The behavior exhibited by Trump regarding the Russia investigation is mirrored closely by reports of his behavior towards Homeland Security officials, from recently-departed Secretary Kirstjen Nielsen down. Less than two weeks ago, Trump forced Nielsen to resign and a slew of ensuing media reports revealed the main reason why: He kept demanding that Nielsen break the law. Although she had enforced all sorts of cruel and unnecessary policies, she was unwilling to do that.

Trump, driven by both racism and corruption, really does not want to allow migrants from Central America into the country to apply for political asylum, and simply does not accept that both U.S. law and international agreements give them that right. So he reportedly plagued Nielsen repeatedly, even calling her at home in the early morning hours, demanding that DHS simply stop accepting asylum applications in direct violation of the law.

While Nielsen got the brunt of the browbeating, Trump reportedly pressed other law enforcement officials to ignore the law as well. Jake Tapper at CNN reported that when visiting border agents in Calexico, California, Trump told them simply to deny entry to asylum seekers and then to disobey judges who might try to compel them to follow the law. Trump's closest adviser on immigration, the justly notorious Stephen Miller, has also reportedly been calling federal agencies to demand the illegal blocking of immigrants at the border.

Later, Tapper reported that Trump tried the same ploy with Customs and Border Protection commissioner Kevin McAleenan, who has since replaced Nielsen as acting secretary of Homeland Security. Trump asked McAleenan to deny entry -- at risk of repetition, that's a direct violation of the law -- and suggested he might offer a presidential pardon if McAleenan got into legal trouble for it. House Democrats are now moving to add this incident to the unfathomably long list of misdeeds by Trump that they need to investigate.

It became an overnight but still utterly true cliché to note that Trump appears to think he is a mob boss running a criminal organization, right down to the comically on-the-nose details such as Trump berating McGahn, his former White House counsel, by declaring, "Lawyers don't take notes." This behavior is chilling enough when we consider how Trump abuses his power, both to shield himself from legal accountability and also to enrich himself at the public's expense.

But this pattern of mob-boss behavior replicating itself in Trump's dealings with Homeland Security officials shows that the problem extends well past concerns about Trump's personal corruption. His criminality is starting to affect public policy, and the fundamental question of whether or not the laws created by Congress and through international agreements — laws created, in other words, through our democratic and diplomatic systems — will be respected and enforced. Trump cannot achieve his ends through legal, political means. Since he has zero qualms about committing crimes, he's looking to achieve them by illegal means instead.

The one silver lining in both the Mueller report and in Trump's reported interactions with Homeland Security officials is this: Despite Trump's relentless battering of our political institutions and the widespread support he has from elected Republicans in his efforts, those institutions are actually holding up pretty well.

As the Mueller report explains, "The President's efforts to influence the investigation were mostly unsuccessful, but that is largely because the persons who surrounded the President declined to carry out orders or accede to his requests."

People who work for Trump are still afraid they may face legal and professional consequences for breaking the law on his behalf. We see this in the Mueller report with officials like Sessions and McGahn, and we see it in the behavior of Nielsen and other Homeland Security officials who may agree with Trump's noxious anti-immigration policies, but have so far been reluctant to act on his illegal orders, if only out of a sense of self-preservation.

But there are reasons to worry that this line may not hold, because Trump has figured out a blunt but effective way to push his agenda: If people who work for you won't break the law or violate their professional ethics, fire them and find someone who will. That's how he managed to drum Sessions out of the attorney general's office, only to replace him first with Matt Whitaker, a thoroughly unqualified flunkey, and then with Barr, who appears all too happy to run interference on the president's behalf (though so far, at least technically, following the law). Trump appears to have similar hopes that McAleenan will do the unsavory and possibly illegal things that Nielsen balked at doing.

There is only so much pressure the system can take from Trump's seemingly endless energy for battering our political institutions. The longer he stays in office, the bolder he gets about pressuring subordinates to do unethical and illegal things, and the more surefooted he gets in ridding himself of those who won't. If he is re-elected next year, the increasingly fragile laws and institutions that protect our democracy could collapse for good.