Welcome to the Fourth Reich: Donald Trump's assault on the rule of law will not end well

Trump and his allies have systematically undermined the rule of law. Soon they can dispense with it entirely 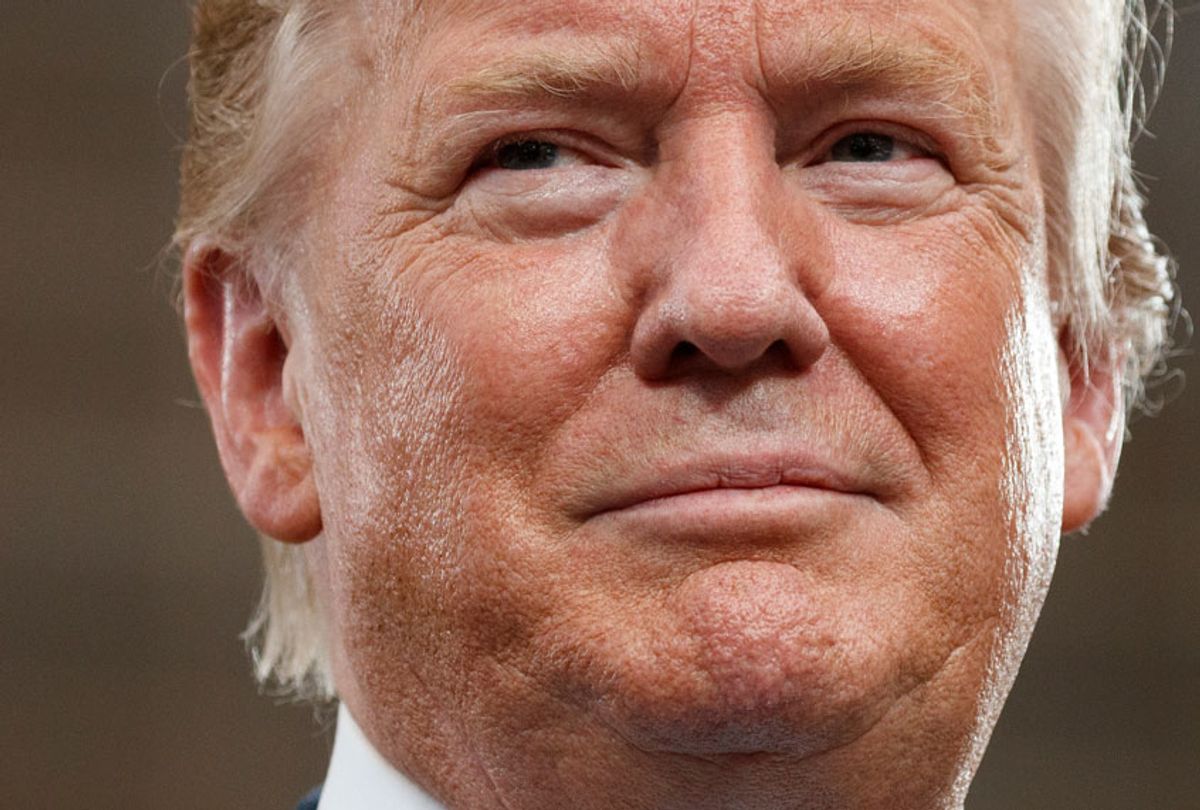 Donald Trump is not an ideologue or a person who possesses a coherent or sophisticated understanding of political theory, history or philosophy. He is all impulse and id, a man gifted in manipulating the fears of ignorant and insecure white people in the service of expanding his power and his fortune. Trump's enforcers, including Attorney General William Barr, White House senior adviser Stephen Miller and the right-wing media machine, are then tasked with transforming the president's most base impulses into public policy.

As we have seen throughout Trump's presidency -- and as we see now in Robert Mueller's report, with its extensive litany of borderline corruption and its numerous instances of blatant obstruction of justice -- the president and his allies disregard the law whenever it is inconvenient, and enforce it with callous cruelty when it serves their goals.

This strategic arbitrariness weakens and delegitimizes the rule of law until, at some point, it can be totally rejected and dispensed with. The Trump administration's ultimate goal is a "permanent state of exception" in the service of racial authoritarianism.

This administration's collective assault on nonwhites -- in particular refugees, migrants and immigrants from Latin America -- as well as Muslims and other groups deemed to be "un-American" is one of the principal areas where its contempt for the law and democracy is most apparent.

Last week Trump fired Kirstjen Nielsen from her position as secretary of the Department of Homeland Security because she was not cruel enough to immigrants, refugees and migrants -- apparently breaking up families and putting people in concentration camps was insufficient for Donald Trump and Stephen Miller. Even more troubling, Trump fired Nielsen because she was not willing to violate the law at his command.

Trump also reportedly told Kevin McAleenan, who was then head of the Border Patrol and is now acting DHS secretary, to break the law by denying asylum seekers entry to the United States. It has also been reported that Trump promised McAleenan a pardon if he find himself in legal trouble for following Trump's orders.

Trump also told U.S. soldiers at the Mexican border that they should brutalize immigrants, refugees, and migrants. This too is a violation of civilian law, international law, as well as the U.S. Code of Military Justice.

Donald Trump's handpicked attorney general, William Barr, has decided that refugees can be held in detention indefinitely. This appears to be a violation of federal law and constitutionally protected rights to due process.

Trump has also suggested using human beings as political weapons by transporting migrants, refugees and immigrants from Latin America -- a group of people Trump has slurred as a "race" of rapists and murderers and a human infestation -- to "sanctuary cities" as a way (as he sees it) to punish Democrats.

Historian Ruth Ben-Ghiat, a professor at New York University and an expert on fascism, authoritarianism and propaganda, explained the danger of Trump's recent actions to me in a recent email:

This latest threat, and asking officials not to obey the law, and assuring them of a pardon, is just a new threshold of the contempt for law and democratic norms Trump has always shown, and an escalation of his white nationalist ideology and governing-by-vendetta leadership style. He wants to put mayors on the defensive, and create "crises" about immigration on city peripheries -- migrants will pay the price.

Historian Richard Frankel, an expert on modern Germany and the rise of the Nazis, provided additional context for Trump's new initiative, also by email:

When Trump thinks of migrants he thinks of criminals, rapists, drug dealers, thugs, carriers of disease, people so fundamentally alien that they could never assimilate into American society and, in fact, threaten to destroy the country. And when you add his anti-Semitism to the mix, then the problem is not just that they’re coming to destroy America, but that they’re actually being sent by Soros, the “International Jew,” to destroy it.

When the history of Trump's presidency is chronicled by some future scholar, these events over the last few weeks -- including Barr's partisan whitewashing of the Mueller report -- will likely be described as some of the most ominous and important in America's surrender to authoritarianism and fascism.

Unfortunately, said events have already been thrown down the memory hole, both by the public and the corporate media, who have been trained and conditioned like Pavlov's dogs by the orchestrated chaos and confusion of Trump's regime. As cultural critic Gore Vidal observed back in 2004 about the George W. Bush presidency, "the 'United States of Amnesia' will be worse than an amnesiac; it will be — have suffered a lobotomy. There will be no functioning historical memory of our history." What has transpired under Donald Trump is far worse.

This behavior feels new to most Americans. But in reality, such an assault on the rule of law, and the elevation of a man and a movement above the normal political process, are common around the world in failing democracies. Moreover, Trump's regime is echoing one of the most grotesque examples of a failed democracy in modern history: the fall of the Weimar Republic and the rise of the Third Reich and the Nazis.

There is overwhelming evidence to support such a claim.

In addition to the examples of lawlessness and cruelty detailed above, the Trump administration has conducted a campaign of "soft" ethnic cleansing against nonwhite immigrants, refugees and migrants. In a ruling last Friday, a federal judge in New York described the administration's efforts to deport Haitian refugees as evidencing "a discriminatory purpose of removing non-white immigrants to the country."

Trump's regime has threatened to remove judges who will not follow his orders.

Trump has not appointed permanent replacements for key cabinet positions in order to subvert the congressional approval process. This allows Trump to undermine checks and balances on his power by putting his hand-picked minions in control of federal departments and agencies on a temporary, rotating basis. Trump has also chosen to leave senior positions unstaffed as a way of extending his ability to rule by fiat.

Trump and his supporters in the news media routinely use eliminationist and genocidal language to describe nonwhites and others whom they view as a type of enemy Other in America.

Much of Trump and his allies' rhetoric directly channels that of the Nazis and the Third Reich, used to describe Jewish people and others who would be annihilated during the Holocaust.

The Trump administration is ordering the United States military to build more concentration camps for nonwhite immigrants, migrants, and refugees.

In their fundraising emails and other materials, Trump describes his supporters as constituting a "movement" that will somehow "restore" and "protect" America against liberals, progressives, Democrats, nonwhite people, and others who are a threat to his American Apartheid "renewal" project. Absolute devotion and loyalty to Donald Trump is required for this plan to be successful. Trump is now offering membership cards to his supporters to cement their cult-like devotion to him.

Because they see it as their natural home, neo-Nazis and members of other right-wing hate organizations are running for public office as Republicans.

There has been a documented increase in right-wing political violence--some of it lethal --both during Donald Trump's 2016 presidential campaign and now through to his third year in office.

Investigative journalist Andrea Pitzer, who is the author of One Long Night: A Global History of Concentration Camps, told me via email how the Trump administration's new plans to abuse nonwhite immigrants, migrants, and refugees are a violation of international law that will likely end in violence and death.

She explained how, "This idea that there have been discussions of setting up dedicated trains for migrants whose humanity the government disputes and shipping them to designated cities they're not allowed to leave--especially as some kind of political stunt--is beyond disturbing. And talk of the military running detention camps for migrants on American soil is also horrific. Even the shameful detention program for Japanese Americans during WWII was run by a civilian agency."

The current administration seems bent on finding a way to use old and discredited forms of civilian detention against vulnerable groups--the kind of detention we've seen degenerate into atrocities again and again worldwide. The schemes emerging from the White House are a threat to our democracy as a whole and can't be squared with either the Constitution or our obligations under international law.

As new public opinion research by PRRI and Pew shows, the American people are extremely divided between those who understand the value of a more cosmopolitan, forward-thinking, "racially" diverse, and inclusive society and those others (mostly white Republicans and other Trump supporters) who want America to be a white conservative Christian country where other people are subordinated to second-class citizenship, and thus considered peripheral to and therefore outside of the national community.

Donald Trump and his allies are warping and breaking the law to advance this grotesque vision of the American democratic project by mining white rage and white backlash identity politics for personal financial and political gain.

In that same email conversation, professor Frankel describes what Trump's version of America, when fully realized, will look like:

Trump clearly sees the law as an impediment to achieving his goals. He believes he knows what's best for the country (at least for those people he considers to be members of the real national community) and so anything he does in the service of the nation is (or should be), by definition, legal. The promise of pardons for those who work toward his goal indicates the extent to which he'd go to undermine the current legal system in favor of one that is in tune with his will. As Goering put it, "The law and the will of the Fuehrer are one." Trump's vision of America is a white Christian male-dominated Herrenvolk democracy. How to make that vision real is up to those below him, and no law should stand in the way.

Once the law is transformed into the expression of the leader's will, there's not much we can do to stop him.

The myth of American Exceptionalism will not save American democracy or its citizens from Trump's machinations and the global dystopia his agents are so feverishly working to create. In 1935, Sinclair Lewis wrote his famous novel "It Can't Happen Here" about the rise of authoritarianism and fascism in the United States. His warning was eight decades prescient about the Age of Trump. But unfortunately Lewis's question is being asked too late, the tragedy is already unfolding and the answer is a plain and clear "yes". William Barr's distorted version of the Mueller Report is all just scribbling on the epithet of America's democracy and empire. The American people decided to be bystanders to their own history and destiny. This is very pathetic. It is also the truth and a tragedy.