Bill Barr takes a Sharpie to history: It won't be enough to cover up Trump's crimes 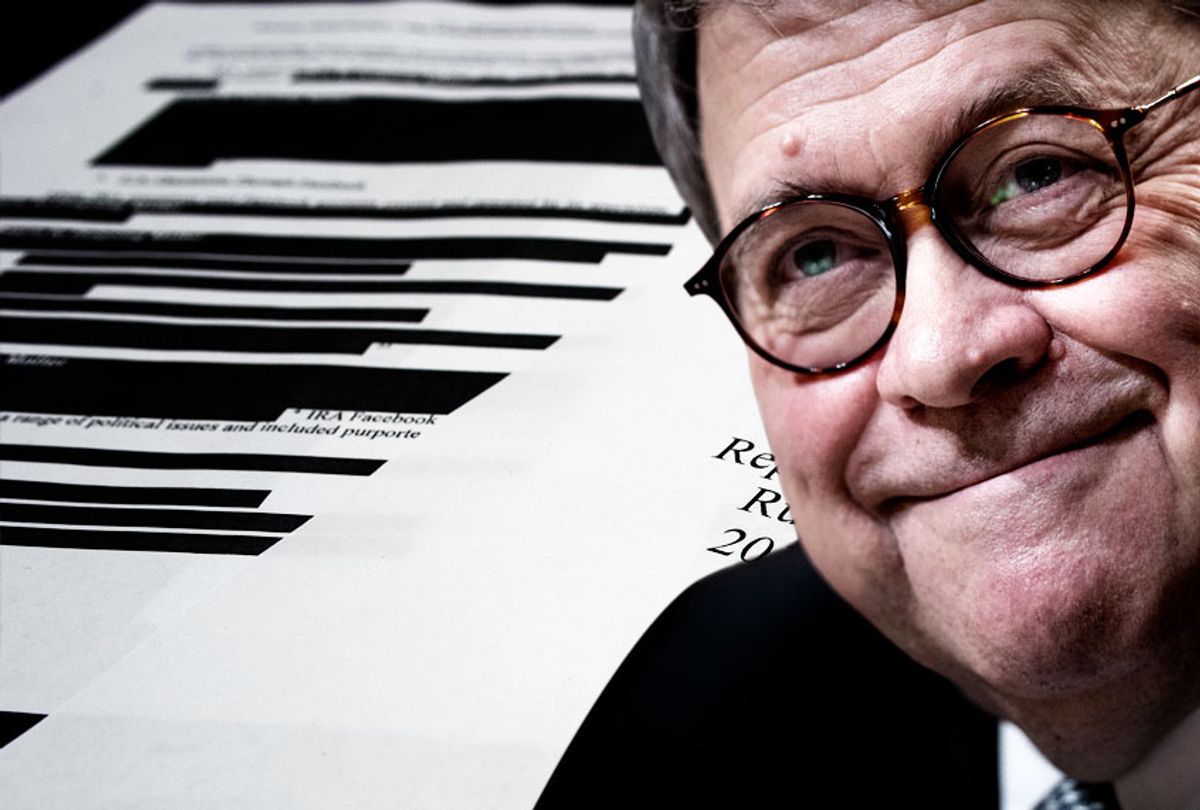 Robert Mueller wastes only one paragraph, citing the statute under which he is submitting his report, before he gets to the heart of the matter. “The Russian government interfered in the 2016 election in a sweeping and systemic fashion.” If the Mueller report does nothing else, it puts to rest the “Russia hoax,” and Trump’s insistence that he accepts Vladimir Putin’s denials that Russia had anything to do with the election of 2016. The Russians helped Trump get elected, and he accepted their help.

The FBI investigation that began  in July of 2016 led directly to Mueller’s  investigation and the heavily redacted report released on Thursday. If there is one conclusion you can draw from Mueller’s report it is this: it was all about Russia. It was a “wildly successful Russian influence operation from start to finish,” former FBI counterintelligence agent Clint Watts told NBC on Thursday morning. If Trump campaign officials did not seek out the help of the Russians in 2016, they certainly accepted it, according to the Mueller report, which cites dozens of contacts between members of the Trump campaign and Russians during the campaign.

At no point did anyone connected with the campaign contact law enforcement agencies such as the FBI and report these contacts. To the contrary, the Trump campaign made continual use of the help the Russians provided to the campaign when Trump repeatedly and approvingly cited the release of the Democratic Party emails hacked by the Russians and released by WikiLeaks. He cited WikiLeaks and the hacked emails more than 160 times at rallies and in interviews in the closing weeks of the campaign.

According to the Mueller report, contacts between Trump officials and representatives of the Russian government and individuals close to President Vladimir Putin continued after Trump won the election and was engaged in the presidential transition. More contacts with Russians took place after Trump was inaugurated. Mueller  takes 198 pages in Volume One of his report to discuss these contacts between the Russian government and employees and associates of Donald Trump and the help they provided to the Trump campaign.

Mueller then takes 182 pages to discuss Trump’s attempts to halt or interfere with his investigation. “The President of the United States took a variety of actions towards the ongoing FBI investigation into Russia's interference in the 2016 presidential election and related matters that raised questions about whether he had obstructed justice,” the report states in the second paragraph of its second volume. Mueller found 11 instances where he concluded that Trump attempted to obstruct justice. He explains in his report that as a prosecutor he felt constrained by Justice Department regulations from issuing an indictment of the president. He did find, however, that the Constitution provides no immunity to the president for violating the laws of the United States, and found that the separation of powers enumerated in the Constitution provided for a remedy by the Congress if the president is found to have violated the law.

But if the whole thing was a “hoax,” and Trump had nothing to cover up, what the hell was Trump doing trying to stop the investigation?

And there we are.

It’s worth going back and having a look at how the Mueller report deals with the genesis of the whole attempt by Russia to influence the election of 2016 on behalf of Donald Trump.

It was the shadowy Mifsud to whom the Russians turned when they decided to reach out to the Trump campaign with their offer to provide “dirt” on Hillary Clinton in the form of “thousands of emails.” It’s well known by now, and well-covered in the Mueller Report, that Mifsud introduced young Papadopoulos to several Russians, including at least one with close ties to Vladimir Putin, Ivan Timofeev, a man Mifsud described as “having connections with the Russian Ministry of Foreign Affairs (MFA),” according to the Report. This is the equivalent of the Russian state department.

Up until April 26, 2016, the day that Mifsud returned from a five-day trip to Moscow and told Papadopoulos the Russian government had Clinton’s emails and was willing to provide them to the Trump campaign, Mifsud was using a potential meeting between Trump and Putin as a cover for his contacts with Papadopoulos. The young Trump aide was obsessed with the idea he could set up such a meeting. He sent repeated emails to officials in the Trump campaign in New York, including Sam Clovis, Corey Lewandowski and Stephen Miller, about Trump’s potential meeting with Putin. He raised the possibility at a meeting with Putin to Trump’s “foreign policy team,” presided over by Trump himself and Jeff Sessions. Many of the emails about a Moscow trip were provided to Mueller’s investigators by Papadopoulos or other Trump campaign officials.

When Mueller attempted to establish that the Trump campaign had been informed about Russia’s hacking of Hillary’s emails, suddenly the emails  evaporated, and everybody developed memory problems. No Trump campaign officials admitted that Papadopoulos had reported about the Russian "dirt" to them. They said they couldn't recall. Papadopoulos, who remembered every contact he had with the campaign about potential Trump trips to Russia, couldn't recall if he had reported to the campaign that the Russians were offering to help Trump.

There are very few redactions throughout Mueller’s discussion of Papadopoulos and the Russian offer of Hillary’s emails made by Mifsud in London. A few “investigative technique” redactions around Mifsud and his Russian intelligence connections, and one or two “grand jury” redactions in footnotes regarding contacts between Papadopoulos and Lewandowski and Clovis.

But when the Mueller report reaches the heart of the matter, a section titled “Trump Campaign Knowledge of ‘Dirt’,” the pages bloom with blacked-out text. At the same time people like Clovis and Lewandowski and Miller can’t recall any conversations with Papadopoulos about “dirt” on Hillary Clinton, suddenly the grand jury steps in to deny details that might bear on these matters.

The same thing happens throughout the Mueller report. Every time Mueller’s investigators get close to establishing any kind of “collusion” between the Trump campaign and Russians, everybody starts coming down with memory problems  and huge sections of the report are redacted.

How WikiLeaks got the Clinton emails and what they did with them? Grand jury says, not so fast, buster. It’s Sharpie time! Carter Page goes to Moscow? Grand jury says no, no, no! Redact-a-mundo! Manafort gets cozy with Deripaska and Konstantin Kilimnik? Sharpie time! Russian banker and Putin buddy Kirill Dmitriev starts messing around with Kushner and former Blackwater chief Erik Prince? Redact-aroonie! Prince flies to the Seychelles to meet with Dmitriev about setting up a “back channel” between Putin and Trump? Grand jury time! Sharpie-palooza! Mueller tries to find text messages between Prince and Trump adviser Steve Bannon about the Seychelles meeting? Whoops! That section of both men’s text messages have gone missing! And what do you know, neither man can remember what they were texting about!

And we knew this was coming: Mueller reports that in his written “interrogation” of Trump about Russian interference in the election and his possible obstruction of justice, the president said he “can’t recall” or “can’t remember,” or “has no specific recollection” 30  separate times.

In fact, every time Mueller and his investigators got close to establishing a conspiracy between the Trump campaign and the Russian government, texts and emails went missing, memories failed and people just out and out lied.

This is called circling the wagons. Trump and his people knew that the Russians had offered help to their campaign, and they began by denying any Russian contacts outright. Trump and his associates lied for months and months about whether they had had any contacts with Russians. They kept up the lying, and when the FBI began investigating them, several Trump associates like Flynn and Papadopoulos told more lies, were indicted and later pled guilty. After that, the rest of the Trump gang got the message and quickly converted their denials into "I can't recall."

Trump people clammed up and closed ranks around the issue of whether the Russians told them they had “dirt” on Hillary Clinton way back in April of 2016. Then their memories started to fail.. When the Mueller report got close to revealing evidence that Trump and his campaign had anything to do with Russians, Barr redacted it.

It’s like he took a Sharpie to history. That’s how Barr found "no collusion." Trump and his people couldn’t remember colluding, so “collusion” doesn’t exist.

In the immortal words of our tweeting president, that’s “total bullshit.”