I lectured about the public health dangers of industrial farming. But what I saw went beyond my fears 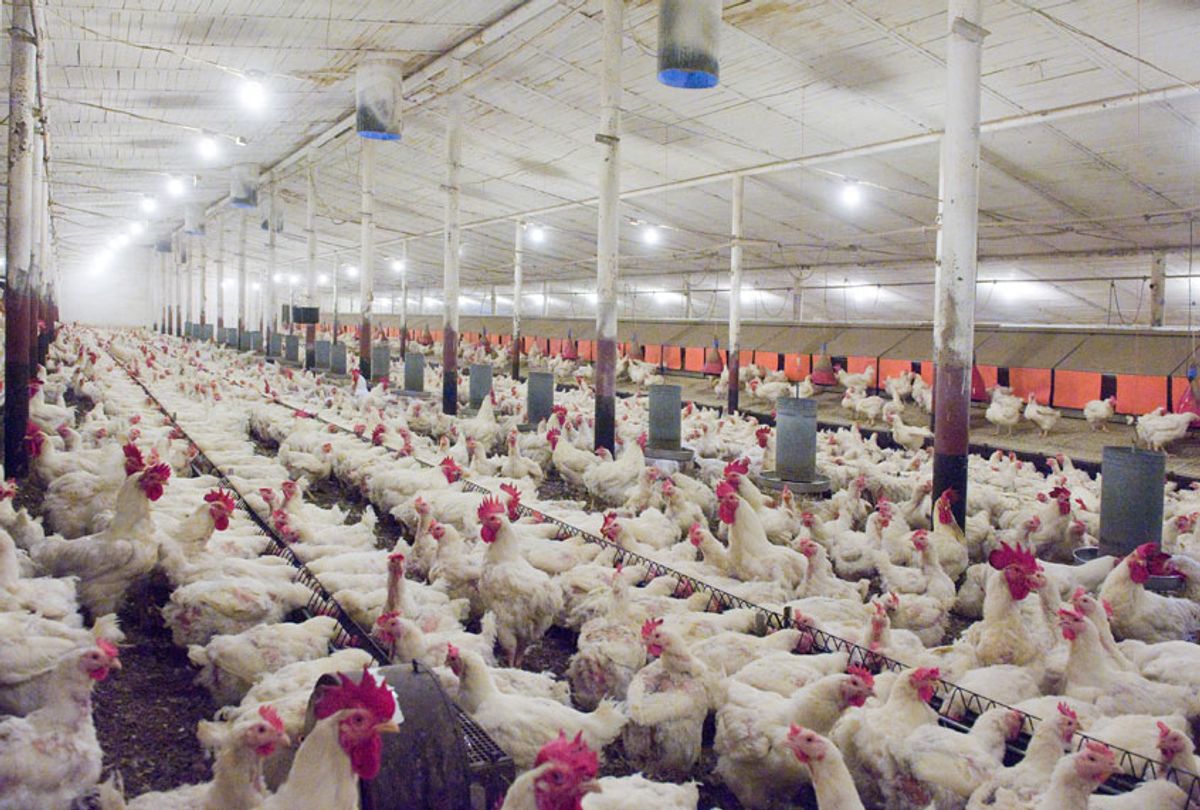 Excerpted and adapted from "Our Symphony with Animals: On Health, Empathy and Our Shared Destinies" by Aysha Akhtar. Published by Pegasus Books. © Aysha Akhtar. Reprinted with permission.

I was giving a talk at a conference in Oklahoma about the public health dangers of industrial animal farming, or “factory farming” as it is commonly called. Each year, more than 64 billion animals are raised and killed for food globally. In the United States alone, 1 million animals are slaughtered every hour. Largely because of increased demand for cheap animal products, intensive animal operations have replaced most traditional farming practices world- wide. The transformation of animal agriculture is so dramatic that it has been dubbed the “livestock revolution.” This unprecedented change in the human relationship with animals has led to not only more animal suffering than ever before in human history but also to devastating harms to human health.

At the conference, I presented data showing how animal agriculture (and the resultant high consumption of animal products) causes more greenhouse gas emissions than the entire transportation sector. It also pollutes our land and water and increases our risks of cancers, obesity, strokes, and infectious diseases like salmonella, E. coli, and bird flus. Throughout my presentation, a solemn-looking woman with short, auburn hair and glasses kept shaking her head in disagreement. When I ended my talk and opened the floor for questions, the woman went on the attack. She disputed everything I said. There are no environmental hazards, no infectious disease risks, no animal welfare problems.

“Have you ever visited one of these farms?” she demanded, with evident anger.

I told her I had not because these places are not open for the public’s viewing. But my data came from reputable studies published by institutions like the Johns Hopkins Bloomberg School of Public Health and the Food and Agriculture Organization of the United Nations. The evidence is so strong, the American Public Health Association called for a moratorium on factory farms.

The woman, Jean Sander, was dean of the Oklahoma State University’s Center for Veterinary Health Sciences. “You need to visit our farms,” she replied. “They are nothing like what you say.”

Three months later, I take Jean up on her offer. The farms are worse than anything I’ve read.

On a dismal morning in late November, I meet Dr. Sander at the parking lot of a Sonic fast food restaurant in Bristow, Oklahoma. After we greet each other and complain about the weather, I get into her car. We head out to visit an egg-laying farm about a half hour away. This farm is not the place Jean initially set up for my visit. She was originally going to take me to see a “broiler” farm, where chickens are produced for meat, which is contracted by Tyson Foods. The Tyson chicken facility is one of Oklahoma’s largest.

But a few days before my flight to Tulsa, the Tyson facility manager backed out. He informed Jean that an undercover investigation at a chicken facility in Tennessee recently caught the attention of news reporters. As a result, he was not letting any outsiders in his buildings. The undercover investigators videotaped farm employees beating sick chickens with spiked clubs. Like the Oklahoma facility, the one in Tennessee was also contracted by and supplied chickens to Tyson Foods.

It’s a wonder that the Tyson manager was initially willing to let me in at all. When I told Jean during my earlier presentation that factory farms don’t allow visitors from the public, I wasn’t exaggerating. Over the past decade, states have enacted laws to protect animal agricultural farms from outside attention. “Ag-gag” laws, in particular, criminalize journalists and animal protection groups, and they prevent just about anyone from taking undercover videos documenting what occurs within. These investigations have revealed not only rampant animal cruelty but also violations that have led to some of the largest meat recalls in the United States.

The only reason I am being allowed in is because of Jean. Her affiliation with Oklahoma State University, one of the largest agricultural schools in the country, has placed Jean in a position to know many of the animal farm managers in Oklahoma. They view her as an ally. And thanks to my connection with Jean, they must have seen me as nonthreatening. Even so, it took months for Jean to find facilities that would open their doors to us.

Herbert Wendell walks up to us and shakes our hands with fervor. With his ruddy cheeks and cheerful welcome, he immediately reminds me of my father-in law. Herbert comes from a family of crop farmers and was the first to move into animal agriculture. In 1957, he bought one chicken that started his egg-laying business. Since then, the number of chickens has grown to about thirty thousand.

After a few minutes of greeting, Jean hands me a disposable coverall, pair of booties, and gloves. They are meant to keep us from inadvertently introducing infectious agents into the facility as part of a biocontainment plan—methods that clearly don’t work, given how often bird and swine flu epidemics sweep across industrial farms in the United States. Jean and I cover ourselves. We then follow Herbert and his granddaughter inside the nearest of the two animal sheds and . . . oh my god!

The smell that hovered outside drops hard and tries to smother me. I immediately turn away from the others, hold onto my knees, and gag. My head heaves. I’m so nauseated I think I’m going to throw up. As a doctor, I’ve been around plenty of bad smells. Nothing comes close to this. The best way I can describe the smell is this: Don’t clean a cat’s litter box for a month. Then add to it the litter from ten other cats, whose litter you had not changed in a month. Then add a rotting egg. Then a decomposing body. And, just for good measure, add a healthy dose of sulfur. Now stick your head inside this giant litter box, and that will give you an inkling of the smell inside this facility. Just an inkling.

I hide my face so the others don’t see me gag. I’m worried I’ll offend Herbert if I vomit.

With great effort, I swallow the bile pooling at the back of my throat and straighten up. Slowly, my other senses kick in. Touch first. Flies land on my face. I swat ineffectually at my forehead, nose, ears. Next comes sound. Not the individual noises of calls, clucks, and squawks. But a roar. A singular shout.

Then sight. Through the dim lighting, I see rows and rows of wire cages stacked two stories high. Each holding five hens. Twenty-five thousand birds kept in this building alone. The hens are so jam packed that their heads stick out above, along the sides, even below the cages. Their feet stand on wire grids. They have nowhere to go. They can’t even stretch their wings.

Jean tells me that the standard of practice used to be to allow 54 square inches per bird in a cage. Now they’re moving to 60 to 65 square inches per bird as an animal welfare gesture. Sixty-five square inches is about two-thirds the dimension of a single sheet of letter-sized paper. A hen is forced to live her entire life in the space of my laptop screen, but this is considered, by the agricultural industry, as progress.

As we walk down the rows, I breathe through my mouth to somewhat ease the stench. The birds scurry and climb on top of one another to hide near the back of the cages. They’re terrified of us. I’m scared too. Scared that they will crush one another, which Herbert tells me, has happened. Up closer, I see raw, red exposed areas on most of the birds, where their feathers rubbed off against the wires entrapping them. I can’t imagine how painful that must be.

Since birds crowded like this commonly go mad and peck one another to death, these birds were debeaked, a practice whereby workers grab baby chicks in one hand and thrust their beaks between hot, steaming blades. Workers cut off anywhere from one-third to two-thirds of chicks’ beaks while they’re fully conscious. The industry calls this “trimming their beaks.” But slicing chickens’ beaks off with a heated blade or a scissor device, as is frequently done, is not like trimming your nails. Birds’ beaks are sensitive, highly innervated and able to feel pain and other sensations. It would be like having your toes cut off without anesthesia. Not only do chickens rely on their beaks for many functions, having their beaks severed causes them immense, acute, and, often, lifelong pain.

As we walk about, Herbert describes how the facility functions. Conveyer belts run along the span of the building, automatically collecting the eggs that fall under the chickens. Trenches alongside the cages hold feed pellets. It’s all mechanized. No human hand need ever touch a bird until the time of her death. This, then, is a chicken’s life. To huddle in a cage cowering on top of another for one and a half years until someone kills you.

Jean reminds me this is a small facility. Average-size farms house 100,000 birds. The largest may contain 200,000. I am so overwhelmed by the smell of filth and fear, I can’t fathom what those larger factories must be like.

“We keep the top and bottom rows of cages stacked,” Herbert says, breaking into my thoughts, “so that all of their droppings fall through the cages onto the floor below.” For the first time, I peer below the cages at the floor. It’s alive.

Maggots. Hundreds, thousands of maggots squirming about the ground. I jump and lift my legs. Squashed maggots are stuck on the bottom of my bootie-covered sneakers. As I hop on each leg to inspect my feet, I slip.

And down I go.

When I look back at this moment, the image that comes to mind is a scene in the movie Poltergeist (the original, of course), when the earth beneath the haunted family’s house erupts and releases the screaming skeletons and gaping skulls buried beneath. In the downpour of a raging storm, the mother desperately tries to rescue her children trapped inside the house. As she runs into their backyard screaming for help, her foot slips along the edge of a large, muddy pit. She slides into a pool of death.

My fall isn’t as dramatic, but if this place isn’t haunted by anguished souls, what is?

Aysha Akhtar is double board-certified in both neurology and preventive medicine and has a master’s degree in public health. She is the Deputy Director of the Army’s Traumatic Brain Injury Program. Previously, she worked for the Office of Counterterrorism and Emerging Threats of the Food and Drug Administration. She is a Lieutenant Commander in the U.S. Public Health Service, in which she deploys to assist with national public health emergencies. She is also a fellow of the Oxford Centre for Animal Ethics and is a consultant editor for The Journal of Animal Ethics. She is the author of "Animals and Public Health" and lives in Maryland.