"Game of Thrones" recap: What we want on the last night in the world 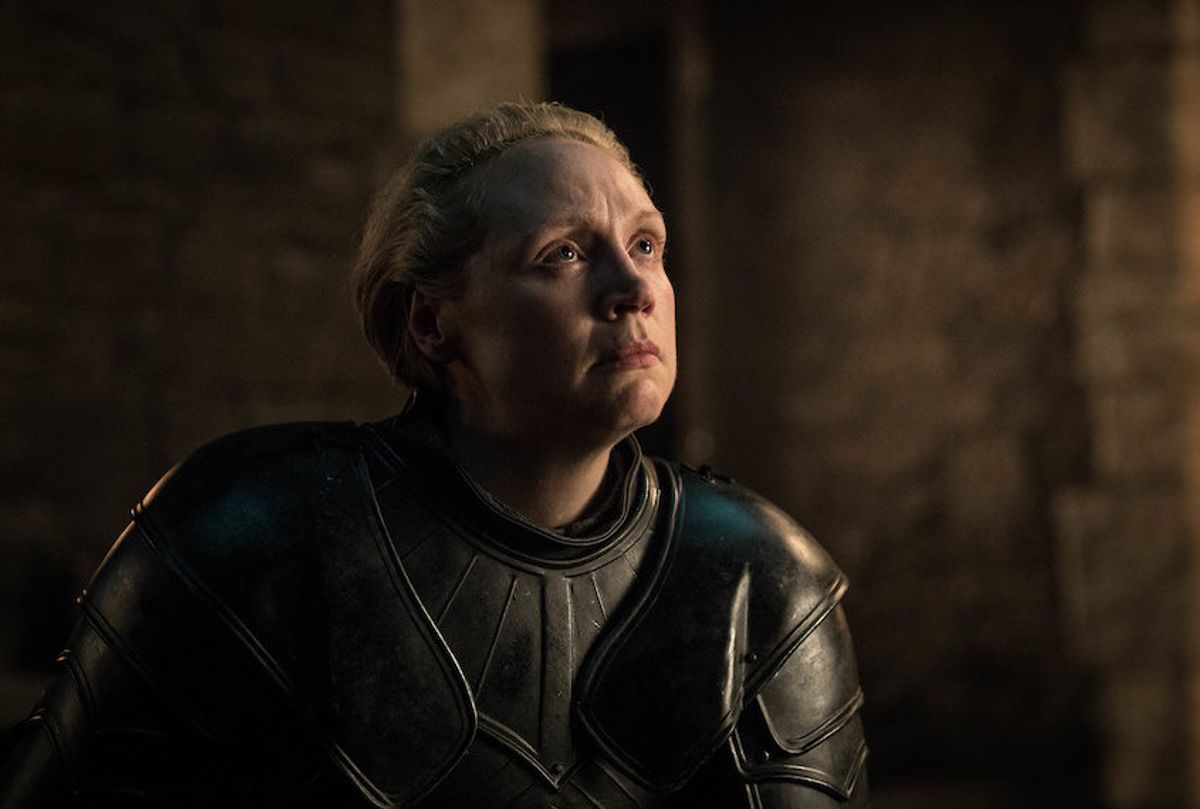 Spoiler alert: This article discusses details about the "Game of Thrones" episode "A Knight of the Seven Kingdoms.”  Stop reading if you haven't watched yet, or don't blame us for what you find out.

Here we are at last, staring at the end of the world and what may be the very last time that we see all of the people we love together, in one place, alive.

What would you do? What would you want? Obviously those questions were top of the mind for “Game of Thrones” co-executive producer Bryan Cogman when he wrote “A Knight of the Seven Kingdoms,” the finale season’s second episode.

He asks on behalf of Jaime Lannister (Nikolaj Coster-Waldau), who opens the hour standing in front  Daenerys Targaryen (Emilia Clarke), Sansa Stark (Sophie Turner), Bran Stark (Isaac Hempstead-Wright) and Jon Snow (Kit Harington), hoping to take his place in the fight for the living and, in doing so, earn a measure of redemption. That is, if they don't kill him.

Dany and Sansa both have reasons to execute Jaime. Dany was raised on the story of how he earned the moniker "kingslayer" by stabbing her father in the back.  Sansa witnessed his various crimes against the Starks firsthand.

Cogman asks these questions for Arya (Maisie Williams), a young woman who never wanted to be a lady and never experienced a true childhood, and for Brienne of Tarth (Gwendoline Christie), who spent her life fighting for honor and respect, and won a small share of the former and a pittance of the latter from the men and women who crossed her path.

“A Knight of the Seven Kingdoms” is an intentionally worded title, one directly referring to the honor bestowed upon Brienne minutes before the midnight of mankind and figuratively playing with “knight” as a homonym.

For the living this may be it — the last night breathing, sensing warmth and feeling emotions. In Winterfell's war room Bran explains that he keeps the memory of this world, and as the assembled process what this means, the episode hints at its role as a parable for holding on to memory, the pain of forgetting and our fear of mortality.

The worst thing that can happen to humanity, explains Samwell Tarly (John Bradley), is to be forgotten. Hence if the Night King destroys Bran, he destroys mankind altogether. What else can they do with the limited calm available to them but to behave as humanly as possible?

Thus the soldiers warm themselves with drink and company one last time, and a girl makes love for the first time. When death is at the door, the little things become all important and don’t matter at all.

As mindful as Cogman is in harvesting these moments that have ripened over the past seven seasons, the reaction to another week of delay in confronting the Night King’s army will inevitably be viewed negatively by a number of people.

Still, let's appreciate what the writers and directors are up against. There are four episodes left after this one, and more than a dozen characters who have been developed thoroughly enough for us to care about what happens to them.

At this point no character is safe, and though many of us may be bracing for the demise of Tormund Giantsbane (Kristofer Hivju), the moment that Podrick Payne (Daniel Portman) first broke out into “Jenny of Oldstones,” singing beautifully about a girl dancing with her ghosts, one might have realized how much we’d ache to see him go, too.

Relatively speaking, Pod is a minor character. Pod is also a man we’ve watched grow up through the series, developing from a feckless squire into a reliable right-hand to Brienne. And it is proper that both Pod and Brienne received stand-out moments in this episode, the lady especially.

For a show with a history of treating female characters poorly, “A Knight of the Seven Kingdoms” (directed by David Nutter) served a small slice of penance. Does it make up for the many seasons of crime and errors? Of course not. Nevertheless, it has been satisfying to witness Sansa come into her power and demonstrably hold her own on behalf of her people, even if it means coming into conflict with a woman who controls two dragons. We also see stern-faced Lyanna Mormont (Bella Ramsey) suited up and declaring her determination to participate in the battle instead of taking shelter with the women and children in Winterfell’s crypts.

Wielding agency is easy for a character who occupies a seat of power, even if it isn’t the Iron Throne.

The fact that “A Knight of the Seven Kingdoms” reserves its moments to cherish for Brienne and, in a more surprising turn, for Arya, who decides that the night that may be her last among the living is as fine a time as any to have sex, is noteworthy and wonderful.

Episodes like this one remind the viewer why “Games of Thrones” has come to represent more than just a story about kings, queens, swords and dragons. Its most thoughtful hours represent the finest virtues and worst impulses of humanity; our incredible ability to endure and survive, and the heinous extremes to which we’ll go to achieve victory over those who are in our way.

And there’s a bit of each at work in this hour, as Dany’s hot blooded lust for conquest and dominion must be cooled by Ser Jorah (Iain Glen), who talks her out of ousting Tyrion Lannister (Peter Dinklage) as her Hand simply because he unwisely chose to believe that his sister Cersei (Lena Headey, who is not in this episode) would put her thirst for power aside for a moment to fight for all of humanity.

Ser Jorah nearly brings Dany and Sansa together as well, until discussions about the post-war politics come into play. That does not compare with Dany’s immediate reaction to Jon Snow revealing his true parentage. In that moment, her first concern is what that information means to her claim to the Iron Throne and not how it could impact their budding love for one another.

Those moves are necessary preludes to the action destined to fuel next week’s episode and likely a few hours to follow. The battle-heavy installments of “Game of Thrones” are always impressive, but they are not designed to move our hearts or secure spots in our memory vaults. That task is left to intimate moments like those serving as the pillars of Sunday's story.

A brief exchange between Arya and the Hound (Rory McCann) bestows a touch of benediction upon both, as Sandor Clegane reminds Arya that he fought for her. Arya’s quiet acceptance of The Hound’s survival demonstrates her maturity; in taking the reins of her first sexual experience, and choosing Gendry (Joe Dempsie) as her partner, she cements her character as an adult once and for all.  Arya and Gendry flirt with one another frequently over the seasons, first by way of childish teasing and then as an act of adolescent annoyance, with Gendry driving Arya into a rage by teasingly referring to her as “milady.”

Like Gendry, a good portion of the audience may find it odd to watch Williams, who began the series as a child actor and introduced Arya as a little girl, have her first on-camera love scene as "Game of Thrones" nears its end. Cogman and Nutter display some awareness of this in the episode’s first encounter between Arya and Gendry, in which she reminds him, once and for all, that she is no longer a scrappy little tomboy.

She picks up a dragon glass dagger — “I know death” — and with a solid thunk, effortlessly sinks it into a post across the room where they are. She picks up another: “He’s got many faces.” Thunk. And another: “I look forward to seeing this one.” Thunk. He gets the point. So when she approaches him a second time and demands he sleep with her, he barely puts up a fight.

And their love scene is handled in a way that doesn’t scare off fans anyone who still picture Arya as a ragged child, with the camera capturing Williams’ shape from behind and focusing, appropriately, on Arya’s battle scars.

Arya takes what she wants at the end of the world, while Brienne receives an honor long denied her when Jaime knights her. ( Brienne vouches for Jaime for during his court appearance at the hour’s start, relating how he lost his hand protecting her from rapists, then gave her a sword and armor, and sent her to find Sansa and take her home. Making a Ser of Brienne is truly the least Jaime can do for her at this point.)

Jaime knights her, charging her to be brave in the name of the Warrior, to be just in the name of the Father, and to defend the innocent in the name of the Mother. She’s already done all these things and more. Granting her an official title rewards Brienne and the audience, allowing us witness Christie’s face light up in the widest smile we’ve ever seen on her very serious character. If Brienne isn't a metaphor for modern women working in a man's world, I don't know what is.  If you didn't tear up even slightly when Jaime uttered the words, "Arise, Brienne of Tarth, Knight of the Seven Kingdoms!” — why, I'm not sure I want to know you at all.

Passages such as these are the main press of a forlorn kiss goodbye to a number of characters, even those one suspects won’t survive the coming conflict. In case that wasn’t clear, Missandei (Nathalie Emmanuel) and Grey Worm (Jacob Anderson) make plans to return to her home when the wars have ended and seal it with a smooch, the surest guarantee that at least one if not both of them will never see those beaches again. Theon (Alfie Allen) comes back to Winterfell to redeem himself and volunteers for the surest suicide mission in a massive kamikaze act.

And we have Davos (Liam Cunningham) and Gilly (Hannah Murray) bonding as they comfort a brave little Northern girl who reminds them of Stannis Baratheon’s daughter Shireen, a ghostly memory they share.

Last week was the arrivals portion of the jamboree, and this week is as close to “eat, drink and be merry” as we were likely to get. You remember what comes next, yes?

As Bran and Jaime acknowledge during a conversation in Winterfell’s godswood, nobody is who they were when they first met. Bran explains that Jaime’s defining crime in the very first episode of the series made both of them what they are now — a man on a quest to remake himself, and boy forced to become something more than human.

Bran doesn’t explicitly forgive Jaime for crippling him, explaining that the war effort needs him. And when Jaime asks what happens after the battle, Bran calmly replies, “How do you know there is an afterwards?”

There has to be, or else why have Cersei spend all that money on 20,000 hired men from Essos? But that’s a matter for later. Every storm gets a calm preceding it  — “the deep breath before the plunge,” as another screenwriter adapting a different fantasy epic describes it. And Cogman’s interpretation of this lusty inhale is, appropriately, a beautiful, somewhat sad sigh that reminds us all of what we’ll soon be missing.