How plastic waste could destroy the Earth within a few centuries

Plastic use has risen 20-fold in the past 50 years. It can take thousands of years to decompose. Are we doomed? 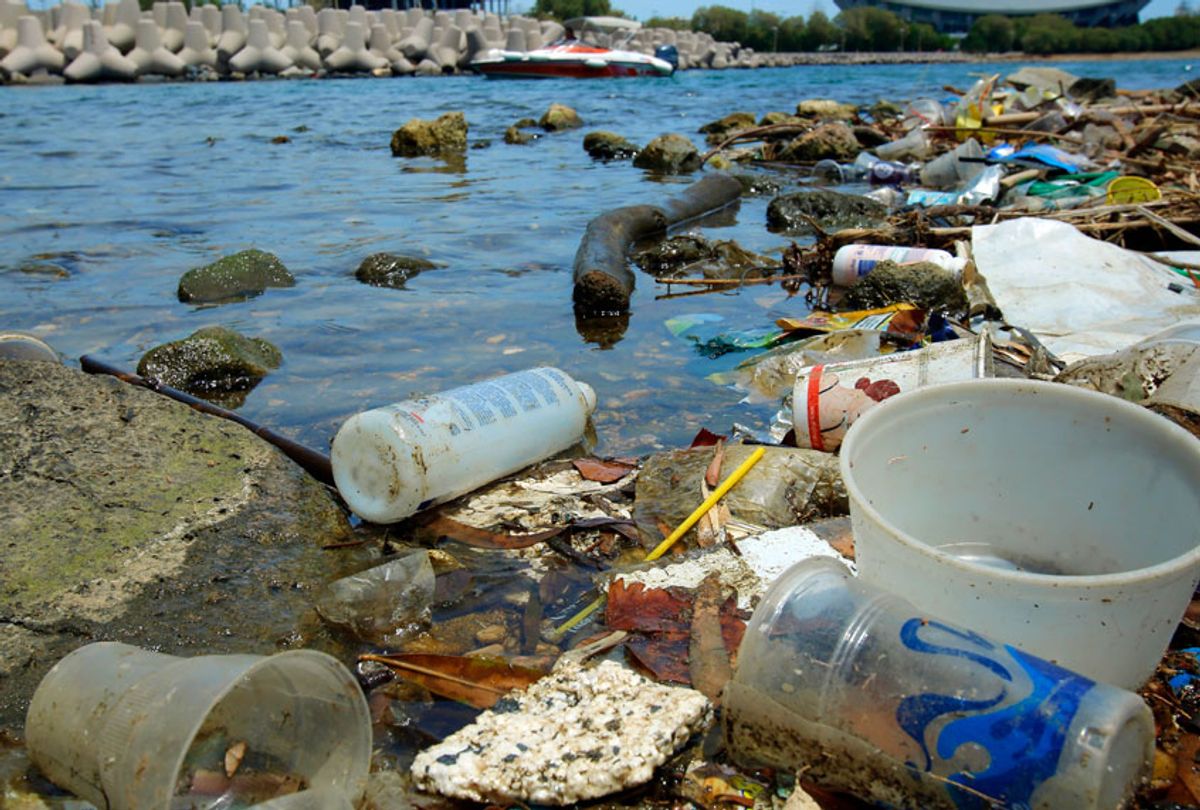 The plastic grocery bag is as ubiquitous as it is inexpensive; nearly all of us have a cache of them in a junk drawer somewhere in our homes. And while some municipalities seek to ban them, plastic bags have become a symbol of capitalism and consumption, given out at stores and malls on every continent. Given their ubiquity, it might be surprising to learn that the plastic grocery bag has only been ubiquitous in the West for a scant fifty years — having been widely introduced in the United States in 1979.

Forty years later, plastic bags are everywhere, especially places they shouldn't be. Such bags consistently make the top-ten list of plastic waste items collected during the annual Coastal Cleanup Day led by the non-profit environmental group Ocean Conservancy — meaning the mass production of the plastic bag may end up being one of humanity's biggest regrets. Along with plastic water bottles, plastic food wrappers, plastic bottle caps, and plastic straws, plastic waste is creating an ocean "wave" that, researchers believe, will result in the mass of ocean plastics becoming greater than the mass of marine life in Earth’s oceans by 2050.

A report by the World Economic Forum in 2016 stated that worldwide plastic use has risen 20-fold in the past 50 years. At this rate, it is predicted to double again in the next 20 years. By 2050, we will use three times as much plastic as we used in 2014. Compounded with the fact that plastic can take up to 1,000 years to decompose in landfills, it is possible the Earth and all of its life, including humans, will be drowning in plastic in the future.  As National Geographic once explained: “If plastic had been invented when the Pilgrims sailed from Plymouth, England, to North America—and the Mayflower had been stocked with bottled water and plastic-wrapped snacks—their plastic trash would likely still be around, four centuries later.”

Beyond our oceans, plastic waste is affecting life, ecosystems, and us. More than 180 species of animals have been documented to ingest plastic debris, according to the British Antarctic Survey, including birds, fish, turtles and marine mammals such as whales. Researchers from the Medical University of Vienna and Environment Agency Austria found microplastics — particles of plastic smaller than 5 millimeters — in stool samples from all of their human test subjects. In other words, plastic is likely inside all of us.

How did we get here, to a point at which plastic could choke the planet in a matter of centuries? Though polyethylene — the type of plastic that accounted for 34 percent of the plastics market (in 2017) — was created in 1933, plastic as we know it today became popular in the United States in the 1950s and 1960s, a result of the rise of the chemical industry and plastics' cheap price point and unique capabilities for manufacturing. Early reviews saw their disposability as a plus, not a minus; a 1955 Life magazine article, titled “Throwaway Living,” celebrated the disposable nature plastics.

Plastics’ largest market today is single-use containers and packaging, perhaps a consequence of the plastic bag-craze that peaked in the early 1980s. The Los Angeles Times called this the “supermarket dilemma” in 1986, which was when more consumers were opting for plastic bags instead of paper bags at the grocery store. Eventually plastic bags won the then $600-million market, despite some opposition that was made from environmentalists. Today, the Global Plastic Packaging Market is predicted to reach $269.6 billion by 2025.

An estimated 1.8 trillion bits of plastic waste have gathered along a single stretch of the Pacific Ocean between Hawaii and California, an exponential increase since the 1970s. Production is expected to increase. Given these statistics, the situation on Earth Day 2019 may seem dismal. Is there anything we can do?

As I have previously written for Salon, the idea that consumers need to curb their consumption habits — or that the state needs to nudge them to — has long been part of the ongoing discourse in modern environmentalism. In a way, it is partly a result of consumers being pigeonholed by the oil and gas companies, the conglomerates who are manufacturing plastic. Indeed, as others have written, regulating these companies would be far easier and more impactful than asking billions of consumers to change their behavior.

Still, even minor regulation of plastic production and consumption has riled industry in unexpected ways. As more progressive cities move toward a plastic straw ban, business interests balked, including McDonald’s . That raises questions about civic responsibility and corporate responsibility, and perhaps the need for an organized movement to fight against the corporations responsible for lobbying for and manufacturing plastic on such a wide scale.

Various plastic bans in municipalities have been increasing in popularity. Initial reports suggest positive outcomes. For example, a plastic bag tax in Ireland in 2002 led to a 95 percent reduction in plastic bag litter. Some companies, like TerraCycle, promote "up-cycling," which is when hard-to-recycle products are reused creatively, say in construction, rather than disposed of in landfills.

This Earth Day will end on a sour note, as plastic production currently shows no sign of abating, despite a few well-intentioned bans such as the aforementioned. It remains to be seen if humans can extricate ourselves from the plastic mess we have created.