A plan to cancel student debt and make college free should be a no-brainer. So what's the problem? 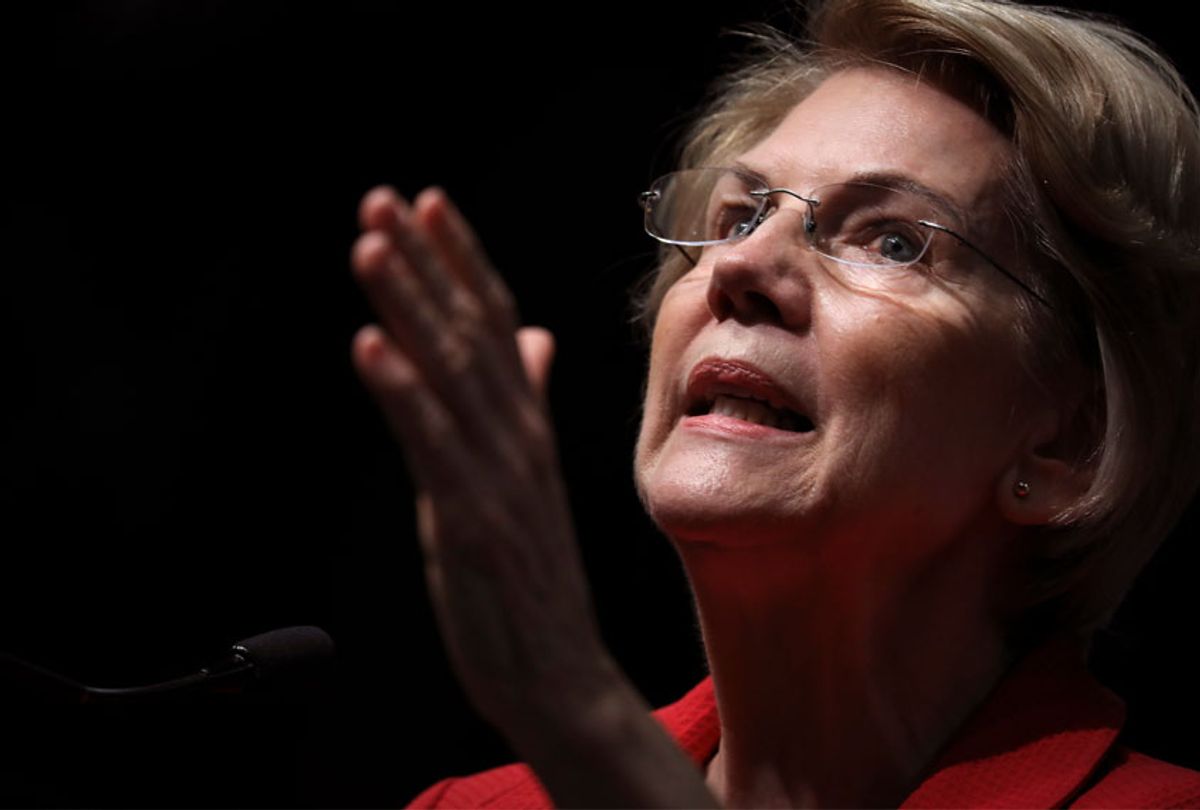 This must be a very difficult time for Americans who've invested a lot of their self esteem in their — and their children's — prestige university educations. I mean, yikes, watching the darkness and corruption of our higher ed system coming to light lately? Wondering what would happen if there were actual systemic reforms? Could all of this make you and your brilliant offspring run the risk of seeming somehow less . . . special? Never fear, people who buy Ivy League onesies for your babies! The merit system isn't coming for you just yet.

It was just a month ago that over two dozen individuals — including actresses Felicity Huffman and Lori Loughlin — were indicted in a nationwide college admissions bribery scandal. We are still in the throes of an investigation involving elite universities including Yale, Stanford, Georgetown, Wake Forest, the University of Texas, Boston College, Boston University, Northeastern University and the University of Southern California. And now, uh-oh, here comes another potential threat to the sanctity of crushing debt and limited options.

In a message seemingly designed to make a Whiffenpoof head explode, presidential candidate Elizabeth Warren this week unveiled a bold proposal to take a huge chunk out of the massive student loan debt millions of Americans are currently carrying, and to make public universities tuition free.

As she explained it Monday, the plan would forgive up to $50,000 in student loans in households earning less than $100,000 a year, which her campaign claims would "provide immediate relief to more than 95% of the 45 million Americans with student debt." It would also make "tuition and fees free for all students at two- and four-year public colleges and expand grants for lower-income and minority students."

The $1.25 trillion it would take to implement the plan would come from a proposed "2% tax on wealth above $50 million and a 3% tax on wealth above $1 billion." Do you have a billion dollars? If not, at least at first glance, this probably doesn't sound like the worst idea you've ever heard.

The notion that a quality education shouldn't financially destroy at least two generations of Americans is not new. States have in recent years rolled out programs to grant free college access to a wider population. In New York, we have the Excelsior scholarship for families below a certain income level with students enrolled in the state and city university system. California has a similar program to cover costs for state residents. But when you consider that 44 million Americans are currently carrying $1.5 trillion in student loan debt, it should be obvious that something is really, really broken here.

When my older daughter was applying to colleges just last year, I was alarmed at the sheer recklessness of the financial "aid" offers our family received. A prestigious Jesuit university sent a sheet informing us that our expected family contribution — after a $22,000 scholarship, and assuming we'd take out loans — would be more than $63,000 per year. This came along with a barrage of emails touting all the doors their diploma would open. Another university offered a $25,000 a year scholarship that would still put our expected costs at around $50,000 per year. It felt like shopping at TJ Maxx — here was the alleged "retail price" of tuition, and here was a lower, allegedly bargain one that's, honest to God, still way too much!

Even the state university system practiced its own form of financial high jinks, with aid officers at more desirable outposts of the SUNY and CUNY systems explaining indulgently that they wouldn't offer much, but if my daughter essentially wanted to take her talents to the minor leagues, she could probably get some better aid from one of those.

The entire process was one long manipulation. And while I have never felt the need to photoshop my kid playing polo or bribe an SAT administrator, I do — on some tiny, middle-class level — understand how crazy-making it all is. I understand the terror for students and families that going to the so-called right school is everything the previous 18 years of have been leading up to, and that if you don't attend the very best and pay the very most you are doomed to abject and eternal failure. The life-ruining debt you and your parents might carry around for decades? The staggeringly grim job market you're entering? Hey, think about that later. Treat yourself. Or wreck your future prospects.

But these are problems not everyone with a college degree faces. For some, Warren's ideas must seem pretty out there. At the conservative outlet Washington Examiner, an editor called her proposal "tremendously unfair to those who have been struggling for years to pay off their student loans," saying, "Those who were more responsible will feel justifiably enraged at the idea that those who may have been more profligate will now get a bailout from the government." He suggests the plan is an affront to those who don't "eat out and travel and deprioritize paying off loans," because yes, if you're graduating with an average of over $37,000 in debt, this is about avocado toast.

I don't know this guy's full deal, but it is worth noting that he attended George Washington University (current annual full time undergraduate cost — $75,000) and has a masters in journalism from Columbia University (current cost per year — $83,884). If he was independently paying off that kind of tuition and loan burden as a 22-year-old, I would love to know how he swung it.

At another conservative publication, the National Review, a writer argued that Warren's plan was unworkable, noting that "Taxpayer dollars should not be used to cancel student debt held by people in this circumstance" because current safety nets "allow for outstanding balances to be forgiven under some circumstances after a couple decades." See, just put in a couple of decades under the debt boulder, and it's all good. As for free tuition, he suggests that's also "misguided" because, "We need to stop sending the signal to our youth that a four-year college degree is the best choice for everyone."

I actually agree that our cultural insistence on one size fits all educational models has been disastrous. But I wonder who this "we" deciding the best options for everyone here is, coming from an author who earned his degrees at NYU and Cornell. I wonder where the sincere business incentive to hire, train and reward a workforce that learns differently is. Because as far as I can tell, the loudest initial recoiling from Warren's proposal — a plan to educate more students and liberate a generation from debts incurred through a duplicitous and punitive system — has come from Ivy League pundits. See also: the recent Twitter shitposting on the subject from a Harvard-educated New York Times conservative, who cracked, "The correct conservative counterproposal to Warren is obviously college loan forgiveness for anyone who has two or more children." I wonder why they're all so distressed. The overpriced colleges with the single digit acceptance rates wouldn't be affected by any of this. Unless of course, a new population of students and graduates began to challenge their value.

A system in which lending institutions and universities and tutors and collection agencies can hum along ruinously and profitably under the veneer of educational opportunity needs be kicked hard in its metaphoric teeth. Yet confronting the fact that game is rigged and that meritocracy doesn't exist seems to some ears shockingly unpatriotic. And the notion that anything as basic as education could somehow be a human right diminishes its value to those who'd prefer to lock the gates of learning behind them. I get it. I sent my kids to public elementary and high school, and have had people say to my face that "You get you pay for." (It's called taxes, but thanks.) And the things that cost the most have to be the best, right?

Education is an emotional, financial and ultimately a moral issue. We are a long, long, long way from a President Warren wresting anyone's dearly paid-for sense of intellectual superiority away from them, and everybody who needs to can still be snotty about state schools. But this is a conversation that is already tellingly threatening to some. We should pay attention to who is unnerved at the idea of young people starting their professional lives with more options, of more Americans becoming the first in their families to go to college, and of learning no longer being automatically synonymous in this country with spending.