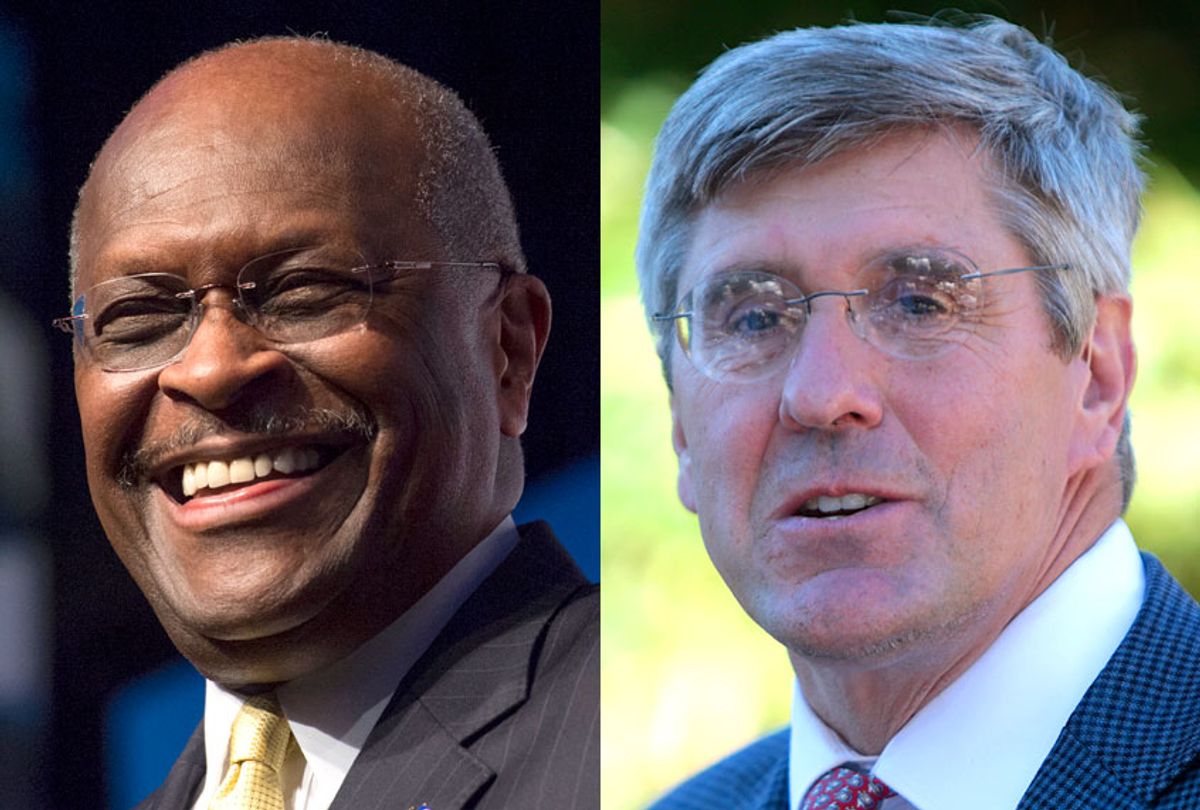 Another one of Trump’s “best" bites the dust.

The president announced on Monday via Twitter that one of his two preferred picks to join the board of directors of the Federal Reserve Bank, former Fox News contributor and failed Republican presidential candidate Herman Cain, withdrew his name from consideration. Days after denying plans to make such a move — “I don’t want an out,” he claimed last week — Cain now says he’d rather “make appearances on Fox Business” than take “a pay cut.”

“I also started wondering if I’d be giving up too much influence to get a little bit of policy impact," Cain wrote in a blog post explaining his withdrawal on Monday.

When announcing his recommendation of Cain for the position last month, the president said that Cain was undergoing a background check and “would be in great shape.”

“I find Herman to be an outstanding person, a truly outstanding individual,“ Trump said at the time. “I would think he would do very well there.”

But Cain, who has spent his days since running for president in 2012 overseeing money making scams and promoting conspiracy theories to his credulous followers, had again come under increased scrutiny in recent days for past allegations of sexual misconduct after one accuser threatened to describe his private parts to Congress if he did not withdraw his nomination. Cain was reportedly already short on Republican support in the Senate.

Trump seems to have an endless supply of worse people to fill his kakistocracy and may nominate someone even less qualified than Herman Cain. Trump has actually already filled four of the Fed’s seven seats, including the chairman Jerome Powell, and the TV personality president still appears poised to hire a TV personality finance guy for the Fed. Larry Kudlow, one TV personality finance guy already hired by Trump to serve as White House economic advisor, confirmed as much when he told reporters last week that Stephen Moore is still up for consideration.

Notably, Stephen Moore isn't an economist. He’s a right-wing pundit who wrote an entire book praising Trump's policies called "Trumponomics: Inside the America First Plan to Revive Our Economy," which sounds like the propaganda you'd write to get a job from Trump. While Cain may have had bad policy — like his comical 9-9-9 tax plan — Moore actively looks to implement terrible policy, as he did in Kansas.

Kansas continues to suffer as a result of Moore’s advocacy of supply-side economics. As the Center on Budget Policy and Priorities has documented, Kansas’ state revenues fell $700 million overnight after Moore’s tax cuts were implemented in 2012. After five years of economic and cultural calamity — Kansas suffered a brain drain as education funding was raided to keep the state afloat — Republican lawmakers finally reversed the tax cuts in 2017. Moore had initially predicted that the tax cuts would bring an “immediate and lasting boost” to the state’s economy.

He also predicted that wheelbarrows full of cash were around the corner after former president Barack Obama proposed a federal stimulus program when the 2008 financial crisis threatened to throw the United States into a deflationary spiral and another depression. He instead called for rate hikes and austerity, which, if they had been enacted, would have cemented a major recession and made recovery virtually impossible. Today, while the economy remains relatively strong and has been growing above-trend, he’s called for both monetary and fiscal stimulus.

Moore is a fully partisan pick by Trump, who has continuously attacked central bank independence. Moore has encouraged Trump to fire not just Powell but everyone at the Fed. He called the Trump tax cuts “death to Democrats,” explaining that he helped design the law to hurt unions, colleges, and blue states. He is the last person to help run the Fed, where board members never say a word in public that isn’t carefully vetted lest they trigger a global financial crisis.

If confirmed by the GOP-led Senate, Moore will either serve a five or 11-year term, depending on which vacancy Trump ultimately nominates him for. In 2011, Republicans, led by Alabama Sen. Richard Shelby, blocked MIT Economics professor Peter Diamond from a Fed position for "lacking the right experience". Diamond had just won a Nobel Prize in Economics for his work on unemployment and the labor market, arguably the most important half of the Fed's "dual mandate." Moore merely wants to politicize the federal reserve and turn it into a weapon against non-corporate borrowers, so it will be a surprise if Republicans muster half as much opposition to his nomination.