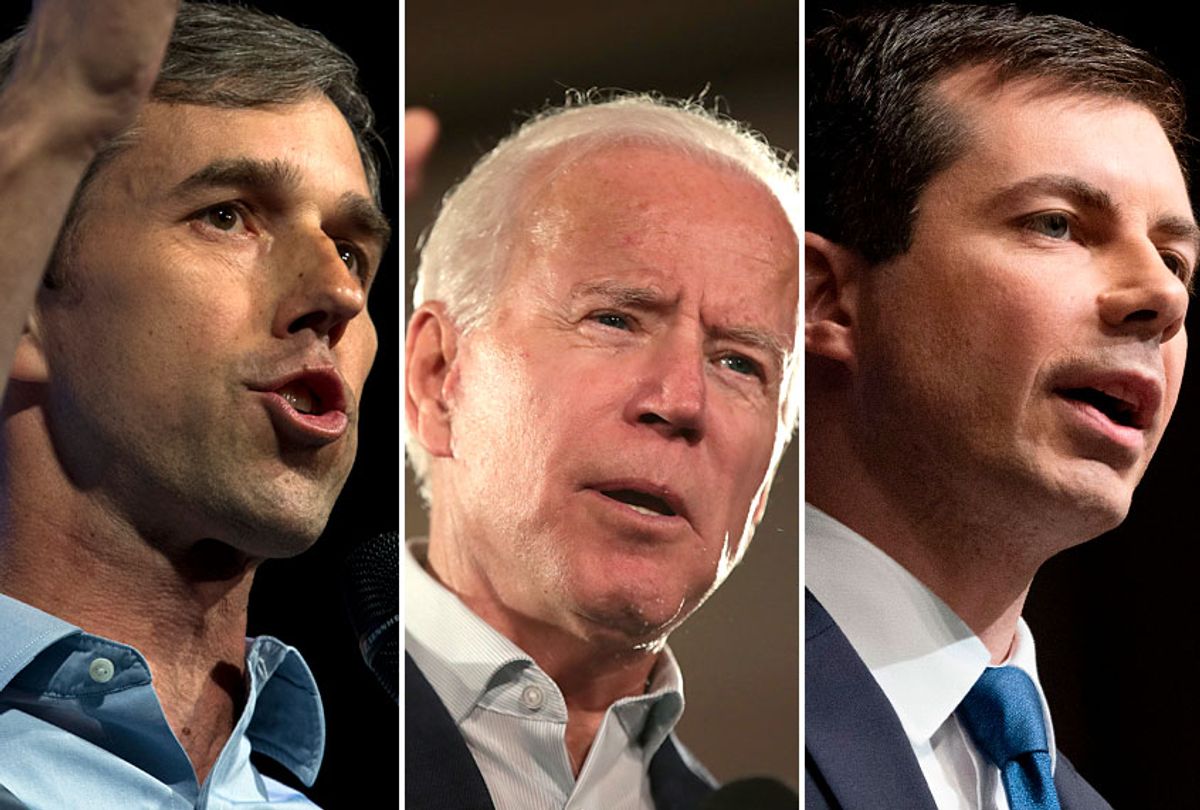 As South Bend Mayor Pete Buttigieg has risen among the crowded field of Democrats vying for the party’s 2020 nomination, former Vice President Joe Biden and former Texas Rep. Beto O'Rourke have fallen, according to a new straw poll.

A new survey taken of members of the progressive political action committee Democracy for America sees Buttigieg rise to third place among Democratic candidates with 10 percent, according to Politico. The leader of the pack was was Sen. Bernie Sanders, I-Vt., who had 42 percent support. He was followed by another leader of the Democratic Party's progressive wing, Sen. Elizabeth Warren of Massachusetts, who came in second with the support of 11 percent of those surveyed.

By contrast, Buttigieg was one of the more than a dozen Democratic candidates who did not even break 4 percent when the same survey was taken in December, according to Politico. Sanders was still in the lead with 36 percent of the vote, followed by Biden at 15 percent, O'Rourke at 12 percent, Warren at 8 percent and Sen. Kamala Harris of California at 7 percent. The worst showing in the pack appears to have been by O'Rourke, who saw 23 percent of his supporters move to Buttigieg, 16 percent move to Sanders and 12 percent move to Warren.

"While these new poll results show Bernie Sanders retaining and even strengthening his support among progressives, the big shifts in support for the broad field of candidate we’ve seen over the last three months make it clear that Democracy for America members are very open to changing their minds, discovering new candidates and reevaluating potential nominees based on the campaign they run in the months ahead," Charles Chamberlain, the chairman of Democracy for America, said in a statement.

O'Rourke's poor poll results indicate his political campaign could have peaked early, a possibility which Tim O'Donnell of The Week alluded to Monday.

"Two of O'Rourke's top advisers, Becky Bond and her deputy Zack Malitz, both resigned from the campaign less than a month after O'Rourke announced his presidential bid, reports The Washington Examiner," O'Donnell wrote. "The reasons Bond and Malitz, who were both involved in O'Rourke's failed but momentous Senate campaign against Sen. Ted Cruz (R-Texas) in 2018, left remain unclear."

He added, "But the departures are just the latest examples of bad news that have struck O'Rourke's campaign this month. Last week, O'Rourke released his tax returns revealing that he twice slightly underpaid his taxes and has given little to charity. They also showed that he profited off stocks in fossil fuel, cigarette, tech and pharmaceutical companies — four industries which, to put it gently, are not currently beloved by Democratic voters."

Biden has also seen his image take a hit with the revelation that a number of women felt he had inappropriately touched them over the years. Although none of the accusations against Biden have risen to the level of sexual misconduct, they loom over his potential candidacy should he choose to run for president in 2020. President Donald Trump has already taken to calling Biden "Creepy Uncle Joe" as a way of making the stories stick to former President Barack Obama's No. 2 and close friend.