Those redactions in the Mueller report are there, in part, to prevent disclosure of serious ongoing investigations 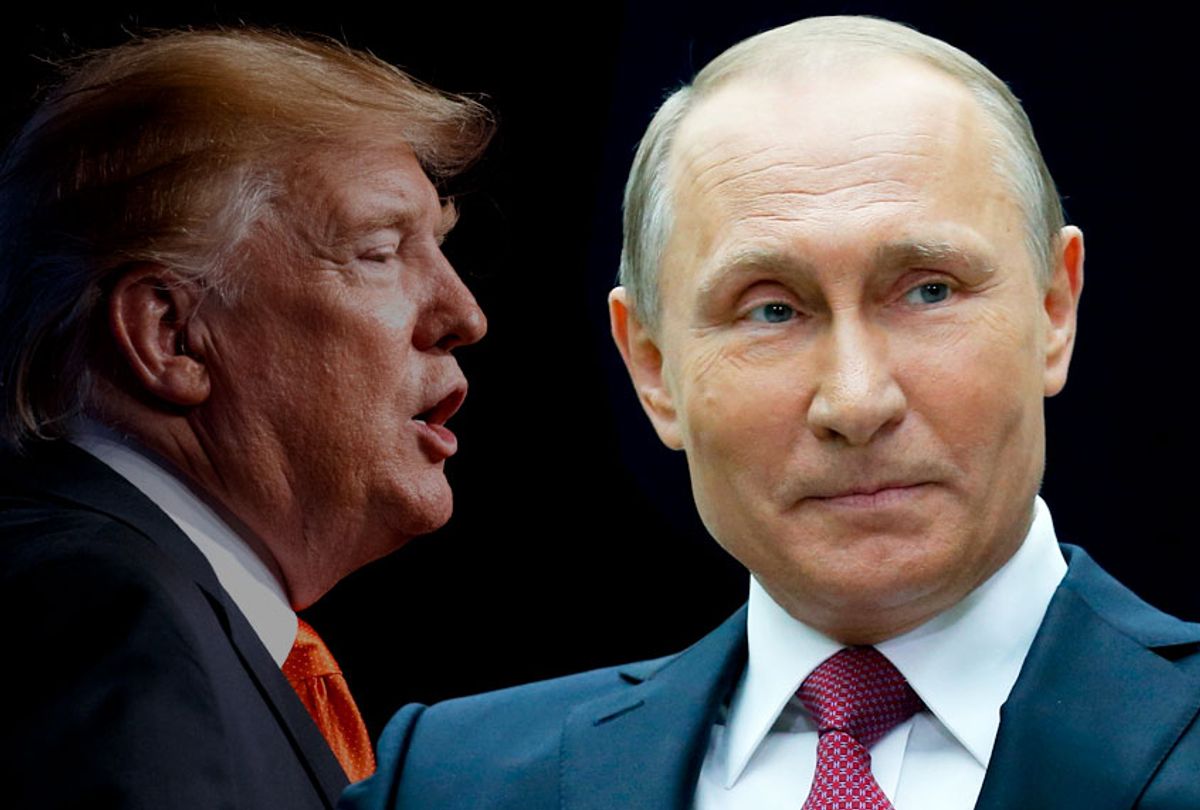 The entire campaign by Russia to interfere in the presidential election of 2016 is best described as an influence operation, a term of art in the business of intelligence. According to former FBI intelligence agent Clint Watts, it was a “wildly successful Russian influence operation from start to finish.” The evidence that this was true is right there in the Mueller report. He indicted 12 Russian officers of the GRU, the main Russian intelligence agency, for hacking Democratic Party emails and distributing them through WikiLeaks and other measures. Mueller also indicted 13 Russian citizens and three companies including the Internet Research Agency for conspiring to interfere in the election using fake ads and other measures on American platforms such as Facebook, Instagram, and Twitter. The Internet Research Agency was funded by a billionaire close to Russian President Vladimir Putin and is thought to be closely associated with Russian intelligence agencies such as the GRU.

“The sort of information that might have been included in those summaries — and which does not appear in the redacted report — might include details about Vladimir Putin’s role in the election interference operation, or the relationship between Russian intelligence and the St. Petersburg troll farm that manipulated U.S. social media.”

A federal statute requires that the fruits of counterintelligence operations conducted by the FBI must be reported to relevant congressional committees. Representative Adam Schiff, chair of the House Intelligence Committee, has requested a briefing on the counterintelligence portion of the Mueller investigation, but has yet to receive a reply, according to NBC. But even if the Schiff committee succeeds in receiving its briefing, we may never learn about it. “Much of that information is not contained in the report, which was designed to summarize prosecution decisions. Left unsaid is that much of that information is also classified,” according to NBC.

In the absence of specific information in the Mueller report, what does an influence operation look like? Well, governments run them all the time against other countries, usually enemies or at least rivals, but sometimes against friendly nations as well, and no doubt they continue to do so today. This country ran dozens of influence operations against the Soviet Union during the Cold War. The agency largely funded the National Student Association (NSA) during the 1950’s and 1960’s, even paying the mortgage on the brownstone in Washington D.C. where the association was headquartered. The CIA also funded small literary and political magazines like Encounter, the Anglo-American literary magazine founded by poet Stephen Spender and famed neo-conservative Irving Kristol. The NSA, with CIA funding, sent student leaders to international conferences to counter communist influence on student organizations. Encounter published articles by prominent anti-communist intellectuals during the Cold War, when intellectuals and literary figures still held sway in the world wide struggle between the communist east and democratic west.

I stumbled into one of the CIA’s influence operations against the Soviet Union in the mid-70’s, when I had a grant from a journalism foundation to take a year off from my regular reporting duties and write a study about my class at West Point. The grant required me to write a series of 12 monthly reports for the foundation which they published in pamphlet form and sent around the country to a large list of business leaders and political figures the foundation saw as influential. I spent most of the year on the road and mailed in my reports to the foundation headquarters at 535 Fifth Avenue, but one month I was in New York and was told to take my report to the office and give it to the foundation’s executive director.

The office was on a high floor at 535 Fifth Avenue. There was a rather narrow hallway with offices running east and west from the elevator bank. The number I had was something like 3511, so I set off down the hall looking. I passed 3501 and saw it was occupied by something called the “America-Asia Friends Association.” 3503 had a sign for the “Friends of Eastern Europe.” 3505 had a plaque for the “Central American Democracy Society,” or something like that, and so on down the hall, each door marked “friends of” plaque for a group related to Eastern Europe or Africa or Central Asia or the far east. Finally I reached the door for the journalism foundation and entered.

There was a small reception area with an unoccupied secretary’s station and just beyond, a larger office where the foundation director sat behind his desk. He signaled for me to enter. As I walked through the door to his office, I could see that there were connecting doors to every single office I had just passed leading down the hall from the foundation director’s office.

He was a preppy sort, a graduate of Yale, and I asked him about the other offices I could see through the door behind him. “Oh, they’re just foundations I’m a director of. I run the New York offices for them.”

“Them” was clearly the Central Intelligence Agency. There were no employees in any of the “friends of” offices. They were shells, influence operations intended to keep the agency’s hand in various places around the world where the Soviet Union also had its hand.

I made a few calls after I left his office that day. Just as the journalism foundation published my reports intended to influence politicians and other thought-leaders in the United States, the foundations behind the doors lining that hallway produced reports and studies and white papers intended to influence political leaders and foreign affairs and defense intellectuals who were at the same time being peppered by similar studies and white papers produced by Russian foundations. It was the Cold War, and there was a war for public opinion around the world, and that war was being fought in some measure by influence operations just like the one up there on the 35th Floor of 535 Fifth Avenue.

There are hints in the unredacted parts of the Mueller report about the Russian influence operation. They begin when Trump aide George Papadopoulos learned that the Russians had “dirt” on Hillary Clinton and were willing to share it with the Trump campaign. The man who told him this was Joseph Mifsud, a Maltese citizen living in London whom Papadopoulos met in Rome at a meeting of something called the “Link Campus University,” described in the Mueller report as “a for-profit institution headed by a former Italian government official.” Mifsud was introduced to Papadopoulos as an important figure in diplomatic circles who was a professor at something called the London Academy of Diplomacy, located on Middlesex Street in London.

A reporter for the British newspaper The Guardian decided to check out Mifsud’s London Academy of Diplomacy when the story about the “dirt” on Hillary Clinton broke in 2017. “Today, there is no sign of the London Academy of Diplomacy on Middlesex Street in London. Phone numbers for the organization that can be found online do not work and websites lead to error messages. A receptionist at the address said the organization left the premises six months ago.” The Guardian reported that some traces of the London Academy of Diplomacy could still be found, however. One was a “photograph of Mifsud and a senior representative of Russia’s embassy in London, a counsellor named Ernest Chernukhin,” The Guardian reported. Mifsud was wearing a medal, apparently awarded to him by the Russian embassy. The Guardian also found that Mifsud was listed as an official of Link Campus University in Rome. “One Rome-based professor claimed Link Campus had a reputation for being closely connected to some elements within the Italian intelligence services,” according to the Guardian.

The Mueller report says that Mifsud didn’t take any interest in Papadopoulos at the Rome meeting until he was informed that the young American had recently been appointed as a “foreign policy adviser” to the Trump campaign. A couple of weeks later, Papadopoulos met with “professor” Mifsud in London. A few weeks after that, Mifsud took a trip to Moscow. When he returned, Mifsud invited Papadopoulos to breakfast and told him the Russian government had “thousands of emails” of Hillary Clinton’s and would be willing to share them with the Trump campaign as part of its support of Donald Trump.

Mifsud “vanished” in the fall of 2017, according to articles in Buzzfeed and The Intercept, and hasn’t been seen by anyone since.

That’s what a Russian influence operation looks like. A mysterious “professor” of a university that no longer exists, attending international conferences held by another university with connections to intelligence services, dealing in stolen emails from one American political party that he’s offering to the other American political party, then dropping off the face of the earth.

Influence operations don’t work unless they are kept secret. The fact that the Russian government had hacked Hillary Clinton’s emails was a secret in April of 2016 when Mifsud offered them to the Trump campaign at his breakfast with Papadopoulos in London. It remained a secret until the emails were released some months later. That the Russians were behind the hacking of the emails remained a secret for months after that. All during this time, the Trump campaign told lie after lie about its connections with Russians.

Whether the Trump campaign was informed about the Russian hacking of the Democrat’s emails in April of 2016 is still a secret, according to the Mueller report, because everyone associated with the campaign had a failure of memory or lied about it.

Whether the Russians are still running an influence operation against our system of elections is still a secret, because “acting” chief of staff Mick Mulvaney told former Homeland Security Secretary Kirstjen Nielsen not to raise the issue of Russia’s continuing efforts to influence the election of 2020, according to the New York Times.

The whole Mueller investigation was a “hoax,” according to Donald Trump. Reports on the connections between the Trump campaign and Russia were “fake news.” Donald Trump tells lies pathologically, but he also lies to keep secrets. That much isn’t a secret anymore.