If Twitter is serious about addressing its role in "the health of the public conversation," look no further 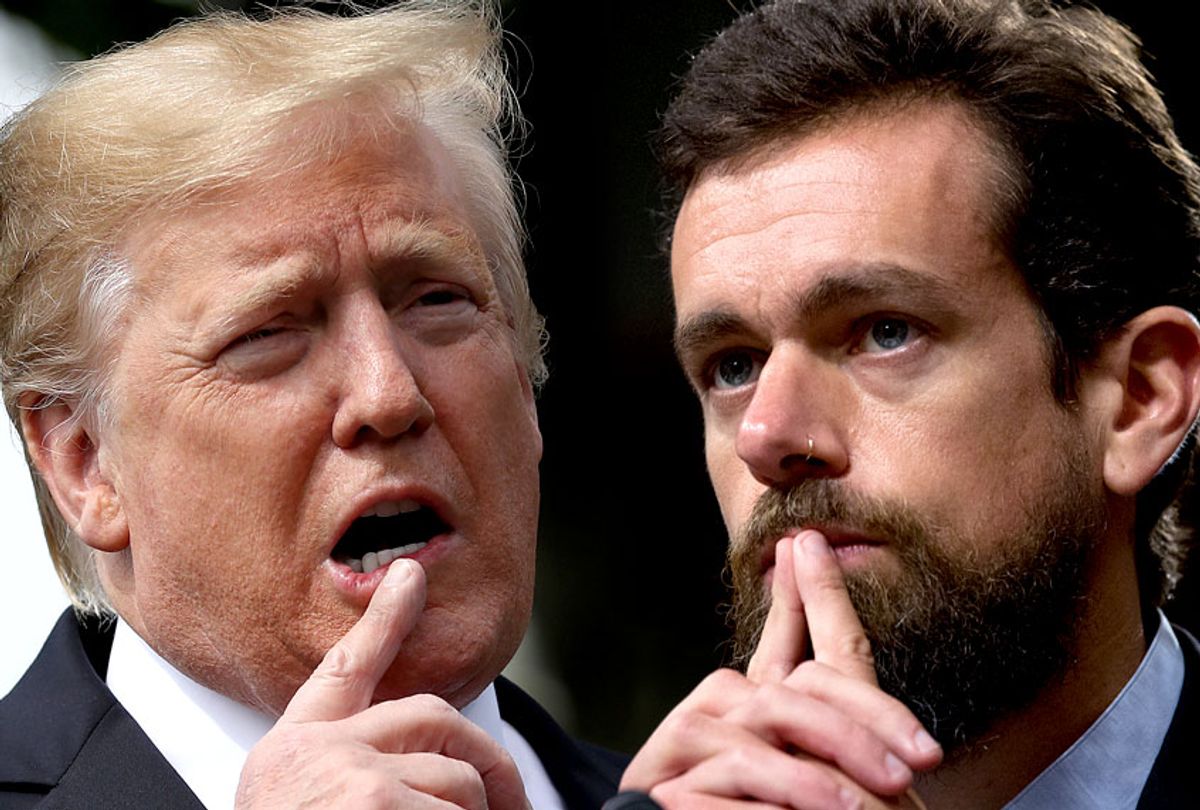 Twitter CEO Jack Dorsey met with the platform's biggest and most powerful bully on Tuesday to discuss "the health of the public conversation on Twitter." Yes, I'm talking about a White House meeting with President Donald Trump, who, according to the Washington Post, spent the bulk of the 30-minute meeting complaining that Twitter unfairly limits his follower count.

Anyone in possession of the most basic understanding of how Twitter functions knows that followers fluctuate as the company removes fake spam accounts. But apparently, the purges are messing up the president's numbers and therefore, Twitter must be curtailing Trump's reach, a totally baseless gripe he and other conservatives have consistently raised. (Pretty rich of Trump to moan about conservative reach and bias against right wing speech, considering that until recently his party controlled both the presidency and both chambers of Congress, which would indicate the GOP faces no institutional barriers to getting its word out.)

The president confirmed the "great meeting" with Dorsey and other Twitter executives, posting a photo to Twitter afterwards, writing, "Lots of subjects discussed regarding their platform, and the world of social media in general" and that he looks forward to maintaining an "open dialogue" with the company from here on out.

But just hours before, Trump had tweeted about how "discriminatory" he perceives the social media platform to be, while also quoting Fox Business guest Daniel Ives, who described the president as "the best thing to happen to Twitter."

"They don’t treat me well as a Republican," he added. "Very discriminatory, hard for people to sign on. Constantly taking people off list. Big complaints from many people."

"No wonder Congress wants to get involved - and they should," Trump added in a follow-up tweet. "Must be more, and fairer, companies to get out the WORD!"

A Twitter spokesperson said in a statement that Dorsey "had a constructive meeting with the President of the United States today at the president's invitation. They discussed Twitter's commitment to protecting the health of the public conversation ahead of the 2020 U.S. elections and efforts underway to respond to the opioid crisis." (As a way to curb prescription drug misuse and addiction, Twitter has partnered with the Drug Enforcement Administration to encourage people to get rid of prescription drugs by dropping them off at local sites.)

According to internal emails obtained by Motherboard, Dorsey wrote to Twitter employees before the closed-door meeting, saying that he believes "conversation, not silence, bridges gaps and drives towards solutions." He continued, "I have met with every world leader who has extended an invitation to me, and I believe the discussions have been productive, and the outcomes meaningful."

Dorsey also acknowledged how controversial Trump is, adding, "Some of you will be very supportive of our meeting [with] the president, and some of you might feel we shouldn’t take this meeting at all. In the end, I believe it’s important to meet heads of state in order to listen, share our principles and our ideas."

Twitter, along with other social media platforms, have long faced unfounded accusations of bias against conservatives, but a lack of evidence has not stopped the backlash from reaching the highest levels of public office. Earlier this month, Republican lawmakers sparred with leaders from Twitter and Facebook charging the platforms with trying to censor conservative political speech. Of course, "all of the evidence Republicans provided were anecdotal stories that representatives from the companies were able to clearly explain away by citing their respective content policies or investigations into specific takedowns," according to the Verge.

The sheer irony of conservatives attempting to paint social media platforms as biased against them when the right's most visible and powerful leader regularly tweets offensive, vile and violent remarks is nothing short of astounding. It is also shrewdly strategic. New York Magazine's Max Read explained last year how conservatives have been able to manipulate tech giants by shifting a long-held right-wing media tactic: instead of just complaining about liberal bias in mainstream media to divert criticism and to get more airtime around conservative issues, they realized the same approach can be used to monopolize social media.

And even beyond Dorsey meeting with Trump mere hours after he complained about the platform in order to stoke right-wing paranoia regarding social media companies, has been working. As Tony Romm wrote in the Washington Post in 2018, "Twitter and Facebook are scrambling to assuage conservative leaders who have sounded alarms — and sought to rile voters — with accusations that the country’s tech giants are censoring right-leaning posts, tweets and news."

So the fact that Trump can contribute to the pile on against Rep. Ilhan Omar, D-Minn., despite the onslaught of death threats she has received, tweet out horrific, sexist garbage against an array of women he doesn't like, fear-monger around asylum seekers and relentlessly attack the media even after newsrooms and journalists have been targeted and subjected to violence, and not only face zero consequences, but also get an instantaneous meeting with Twitter's CEO after complaining about perceived bias, is both hardly surprising and incredibly disappointing.

"It’s nonsensical to argue that Twitter suppresses conservative 'content' when it is, for all intents and purposes, a propaganda machine for the president, one that doesn’t just allow him to spread lies unimpeded but seems to incentivize their dissemination," Read wrote.

After the meeting with Trump, Dorsey tweeted to the president to thank him and to reinforce Twitter's commitment "to serve the entire public conversation," as well as the platform's intention to make Twitter "healthier and more civil." I suppose Dorsey meant as long as you're not the president.

In our current time where the Internet and social media has never been more powerful and vulnerable, especially when it comes to elections and sowing targeted political division and even inciting violence, tech giants absolutely have a responsibility, and that doesn't include appeasing the president about his follower count.