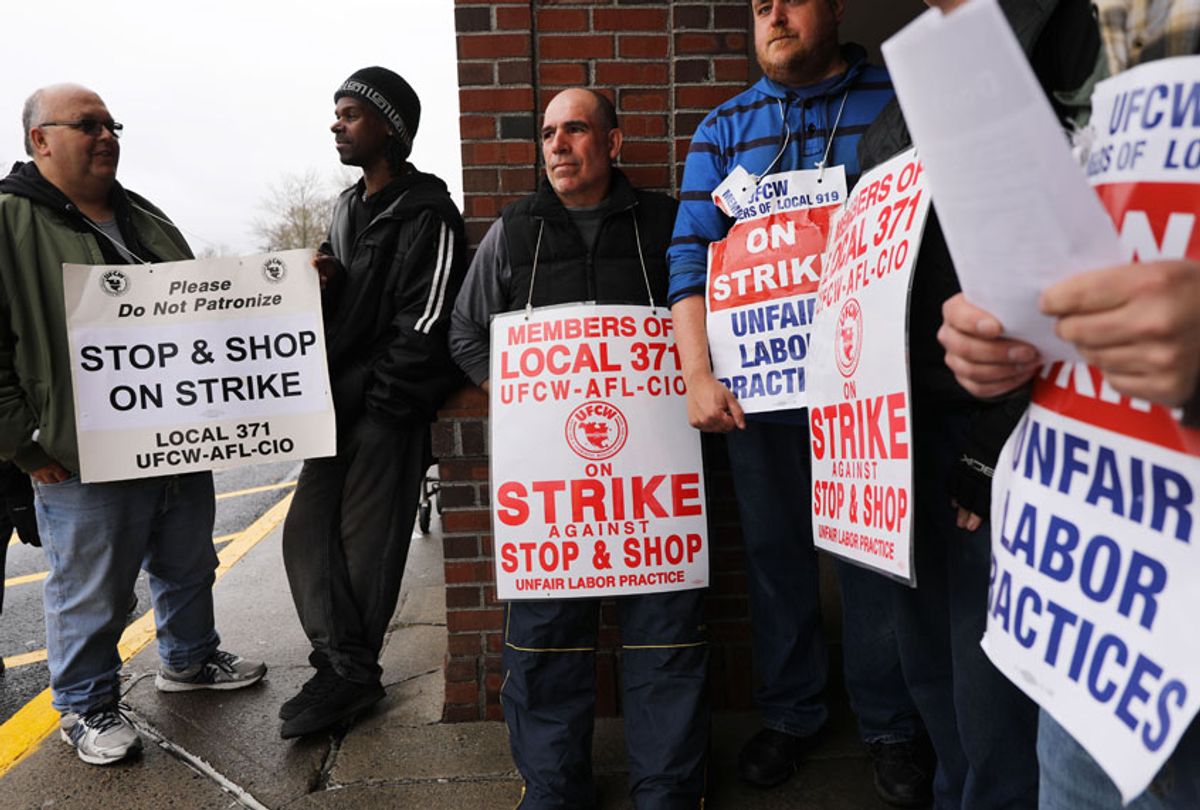 Stop & Shop workers strike outside of one of the grocery stores on April 20, 2019 in Westport, Connecticut. (Getty/Spencer Platt)
--

Leading up to former Vice President Joe Biden getting into the 2020 race, the corporate news logic was that only an old reliable hand like his could save the Democrats from what would be a "self-destructive" radical leftward lurch.

For the last few years, the corporate news media’s universe has been framed as a closed planetary system, that has its nemesis Donald Trump as the solar center of all creation.

In this Great White Man cosmology, like the free-floating head of Oz, every other being is defined by their alignment with him. Polls are anchored in only the terrain of his gaze as the pundits make their narrative all about Donald Trump. And now with the inflation of their Biden balloon, they have the race they want — and it’s the race they need to keep the status quo: Two white guys in their 70s arguing over Charlottesville in the rearview mirror.

This reduces the American people to passive voyeurs of their own history. It ignores that they themselves are already out making history in the form of rising multiracial labor militancy that’s delivering change people can take to the bank. These stories about workers organizing and winning are told, if they are told at all, in isolation — because the one thing the corporate news media that serves Wall Street does not want is for this to catch on.

Better to have you in a focus group than focused on taking charge of your own destiny by striking for better wages, like the 30,000 Stop & Shop workers in New England who just won their strike for higher wages and better health care.

Members of the United Food and Commercial Workers International Union at more than 240 Stop & Shops across Connecticut, Massachusetts and Rhode Island, went out for 11 days against Dutch grocery giant Ahold Delbaize and cost the multinational $10 million a day in operating profits.

This is not a one-off, but part of a rising labor tsunami that’s inspired a diverse list of workers — including teachers, nurses, college adjuncts, reporters, factory workers, Uber/Lyft drivers, cafeteria workers in Silicon Valley, even prison inmates — to put something at risk to organize and, if needed, strike.

Since the 1970s, workers have dealt with wage deflation and stagnation even as their productivity skyrocketed, as owners hogged the profits. At the same time, both political parties did the bidding of their donors, enacting a tax policy that enabled obscene wealth concentration and income inequality.

As a result, tens of millions of working-class families struggle week-to-week to make ends meet in a country that taxes their labor at a higher rate than it does the investment income of the idle rich. That should be grounds for an overthrow of the major party duopoly right there.

The decline in our collective economic circumstance came as corporations increased their dominion over our politics, and went to war to destroy the American labor movement. Their tactics evolved: from the blunt force trauma of strikebreakers and private security forces that got bad press, into the less messy route of lobbying and litigating, which left fewer fingerprints.

In the post-World War II era labor union density hit its high point, at 34.8 percent in 1952. That year, there were 470 strikes that involved bargaining units with more 1,000 workers, with close to three million workers engaged in the direct action of a strike.

In 2017, the first full year of the Trump presidency, an anemic 11.9 percent of the country’s workforce was in a union, with only seven cases in which a union went out on strike with just 25,000 workers hitting the bricks.

But it appears there comes a point when folks have just had enough of being told things are better when they are not, or that the roaring stock market portends a great economy when it has absolutely nothing to do with their lives.

To be sure, our teachers are leading the way.

“In 2018, the largest work stoppage by days idle was between the Arizona State Legislature and Arizona Education Association and involved 81,000 teachers and staff totaling 486,000 days of idleness,” the BLS reports. “The second largest stoppage in 2018 involved the Oklahoma State Legislature and the Oklahoma Education Association accounting for 405,000 days idle. Statewide major work stoppages in educational services also occurred in West Virginia, Kentucky, Colorado, and North Carolina.

This is a resurgence that’s been decades in the making, and transcends the conventional framing of our small-bore electoral politics. It is generational, not measured in convenient four-year cycles.

For now, the corporate news media has bestowed front runner status on Biden, based on their theory he is best suited to recapture the rust belt states like Pennsylvania, Michigan, and Ohio — all states that had a labor legacy, voted twice for Obama-Biden, but fell for Trump’s racially-spiced populism. But this analysis is ahistorical because it ignores the reality that it was the eight years of Obama/Biden corporatist neoliberalism that lost them in the first place.