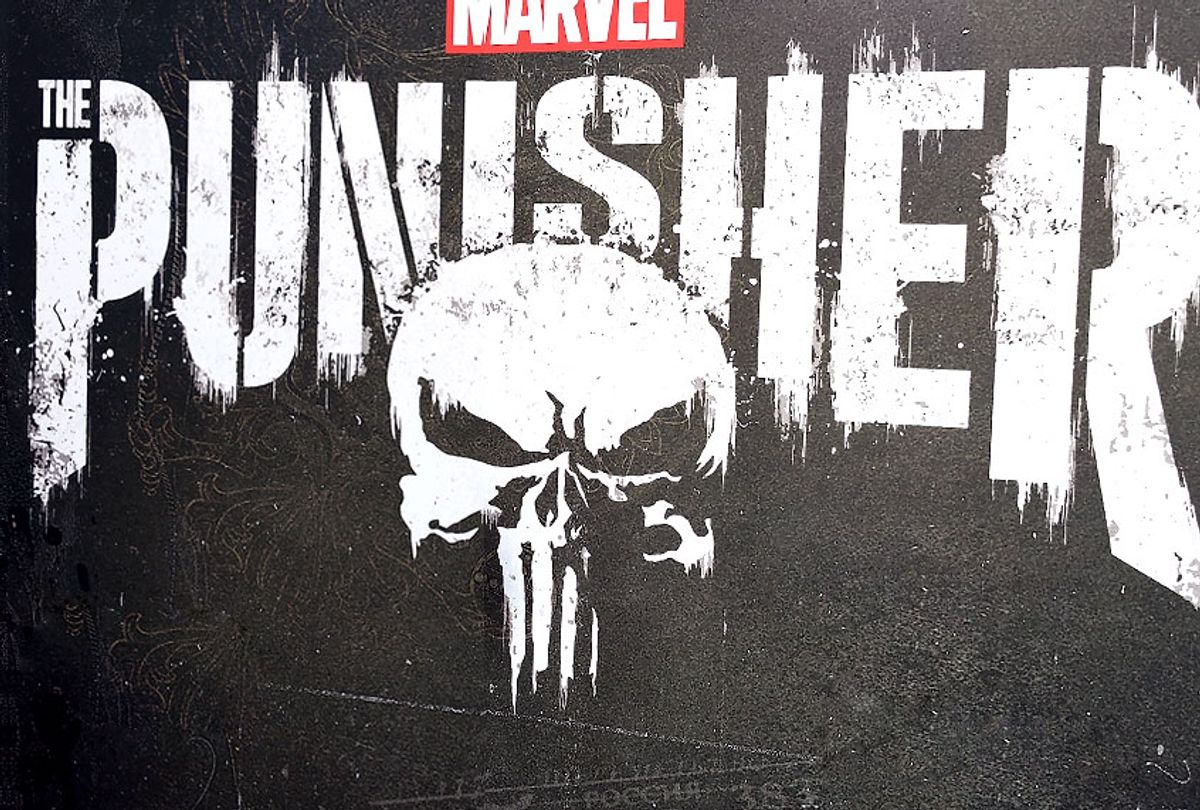 White Americans appear to have enlisted into a death cult. If one drives around the suburbs or rural outposts removed from a major metropolitan area, it quickly becomes apparent that, in their zest and zeal for violence, countless whites have begun to brandish the Punisher skull, typically with red, white, and blue stripes, on their automobiles and clothing. T-shirts at the gym, the bumpers of minivans, with children riding as passengers, and baseball caps all display the menacing skull, proving that it has become ubiquitous in the United States. Several companies, including Thin Blue Line, have made millions selling apparel with ghoulish image.

The Punisher symbol originates with the Marvel comic book story of Frank Castle. After Castle’s wife and children are murdered by career criminals, he adopts the Punisher moniker in his quest to eradicate crime without interference from the liberal cucks who wrote the Bill of Rights and the prissy naïfs who enforce protections for American citizens, such as the irritating regulation prohibiting police officers from summarily executing criminal suspects without a trial.

Chris Kyle, deceased Navy SEAL sniper and patron saint of the American death cult, wrote about the celebration of the skull in his memoir, “American Sniper”: “We all thought what the Punisher did was cool. He righted wrongs. He killed bad guys. He made wrongdoers fear him. We spray-painted the Punisher skull on our Hummers and body armor, and our helmets and all our guns. And we spray-painted it on every building or wall we could. We wanted people to know, We’re here and we want to f**k with you.”

The beauty of Kyle’s prose could bring a tear to the reader’s eyes. Gerry Conway, the Punisher’s co-creator, is crying tears not of joy, but of anger and disappointment. Responding to the late Kyle’s praise of his character, Conway said, “I don’t think he understood the fundamental truth that the Punisher is not a man to admire or emulate.”

Conway also explained that Castle’s mission, and especially his tactics, were “morally dubious.” The Punisher’s identity oscillates between unconventional crusader for justice and psychotic vigilante, torturing and massacring anyone he so much suspects of wrongdoing. Castle is a combat veteran, which likely contributes to active duty military personnel relating to him, but with typical right wing acuity, the skull-sporting crowd rejects the complexity of the character. Garth Ennis, one of the later writers of the comic book, explained that Castle’s experience as a Marine weakens as much as it strengthens him. It provides him with resolve, expert training, and physical bravery, but it simultaneously pollutes his thinking, reducing his criteria for decision making to might makes right. “He comes to see war as the answer to all of his problems,” Ennis said.

It is difficult to quantify with precision, but a large percentage of Americans, mostly white men, do not have the interpretive skill to comprehend a comic book, and as a consequence, are knowingly or unknowingly celebrating the symbol of a character who, if actually existed, would be a serial killer living as a fugitive from the law.

The Punisher skull is not merely a profitable merchandising industry, but an ideological icon verging on religious significance. One of the impetuses for its popularity was a reactionary objection to the Black Lives Matter protest movement. Thoughtless defenders of police amid allegations, or even video evidence, of unethical use of fatal force, adopted the Punisher skull as a sign of loyalty to the unbreakable “blue line.” The Cattlesburg, Kentucky police department even attempted to incorporate the skull into their official squad car insignia. Complaints from residents forced them to remove it. Officers in Wisconsin and New York have also tried to appropriate the symbol while on duty.

Oscar Wilde once said, “Irony is wasted on the stupid.” It is immeasurably rich and sad that cops and conservatives, in an effort to temper complaints that police departments are too quick to pull the trigger and too indiscriminate in their use of violence, have expressed their defense with the emblem of a fictional character who “sees war as the answer to all his problems,” routinely violates the U.S. Constitution, and appoints himself judge, jury and executioner when dealing with anyone under suspicion of illegal activity. One would think that even those who are unfamiliar with the Punisher would hesitate before equating the police with a frightening skull at the precise moment that blacks, Latinos and Native Americans view law enforcement with fear, mistrust, and caution.

There is also nothing like a malevolent icon of death to reassure the local population in Afghanistan, most of whom see the United States military not as a great liberator, but an occupying army. It is easy to imagine anti-war protestors in the late 1960s using a similar skull in depictions of the police or military as “Murder Incorporated,” to use a popular phrase of the New Left.

A few decades later, the police, along with their right wing sycophants, have, clearly without intention, self-applied the indictment. As much as it is obvious that the American right is oblivious to the nuances of The Punisher story, it is far too generous to claim that the Americans who plaster its logo on their chests and bumpers are merely misinterpreting a symbol. A sinister skull, even if one has no familiarity with its origin, is not exactly subtle. It instantly projects death, violence and danger.

The cultural and moral matter more worthy of scrutiny than a comic book narrative is America’s comfort with violence, murder and war. What does it say about a people when they want to communicate hostility and intimidation while they jog on the treadmill, shop for groceries, and drop their children off at school?

2017 was the worst year on record for death by firearm in the United States. Nearly 40,000 Americans died at the barrel of a gun in that year alone, and from 1965 to 2011, 1.4 million lost their lives to gun violence. No statistic on murder and suicide in America, no matter how horrific and off the scale of the developed world — and no mass shooting, no matter how gruesome, even when the victims are children — has moved the United States government to adopt stricter federal gun control regulations.

Following the terrorist attacks of September 11, 2001, America has dropped tens of thousands of bombs on seven countries, invaded two countries, and conducted Special Forces missions in many more. Death and destruction from above do not come cheap. According to a recent study, the U.S. has wasted $5.9 trillion on annihilating human life, ecology, and property. Given that children in Flint, Michigan have developed cognitive disorders and physical defects for lack of clean drinking water, and thousands of American die annually because they cannot afford medical treatment, it is not a challenge to determine how a wise and just nation might have better spent such an enormous amount of money.

“How will you pay for it?” remains the most repeated bromide in reaction to sensible proposals from Elizabeth Warren, Alexandria Ocasio-Cortez, and others relating to universal health care, subsidized childcare and student debt relief. The question never surfaces on the rare occasions that the bloated defense budget, which accounts for over half of federal discretionary spending, becomes the subject of political discussion. More than 40 percent of Americans continue to support President Trump even after his budget proposals call for the reduction or elimination of services for disabled children, poor families, the elderly and the chronically ill.

Much of Trump’s support derives from white America’s fear of what sociologists have called the “browning of America.” Mexican immigrants have become targets of the most intense hatred from the American right. In Mexico, there is a holiday, the “Day of the Dead.” Mexicans construct skeletal figures with wild colors, and do so to pay tribute to their deceased loved ones. Skeletons represent the cycle of life from birth to death, but also love, remembrance, and bonds that are emotionally eternal long after physical separation. Right wing pundits often warn of “America becoming Mexico” — if only.

Americans who wear the Punisher skull signify spiritual fidelity to the dark heart of murder beating underneath the red, white and blue façade of American identity. They quietly observe reports on police shootings, drone strikes, and soldiers suffering from PTSD, but rather than interrogate the lethal assumptions that have created such a violent and dangerous culture — rather than act according to the belief that life is precious, and that even a necessary killing amounts to a tragedy of human failure — they ritualize a fetishization of pain, terror and execution.

To defend the police against accusations of unlawful use of force is entirely separate from celebrating the elimination of life. Chris Kyle writes that he and his fellow SEALs hoped to send the message, “We’re here to f**k with you,” in the middle of a war that President Bush promised would “win the hearts and minds of the Iraqi people,” and millions of Americans embrace the threatening iconography of militarism, even applying it to domestic police who should act as public servants. Then, they express bafflement and outrage over why the citizens of the countries we bomb, and the Americans who live in heavy police patrol neighborhoods, are hostile to the military-industrial complex, and the increasingly militarized police force.

In his modern classic, “The Things They Carried,” poet and novelist Tim O’Brien writes that one of his fellow soldiers in Vietnam, Dobbins, expressed a desire to truly believe in God, not because he had any particular interest in religion, but because he believed it would help him “be nice to people.”

“Dobbins meant the he just wanted to be nice to people and be a decent person,” O’Brien writes, “Because in war you are opposite of that.”

A powerful strain of American culture has embraced the ethic and ethos of war, and it shows in its rejection of kindness and decency — in public policy, in political rhetoric, and on the clothes they wear.