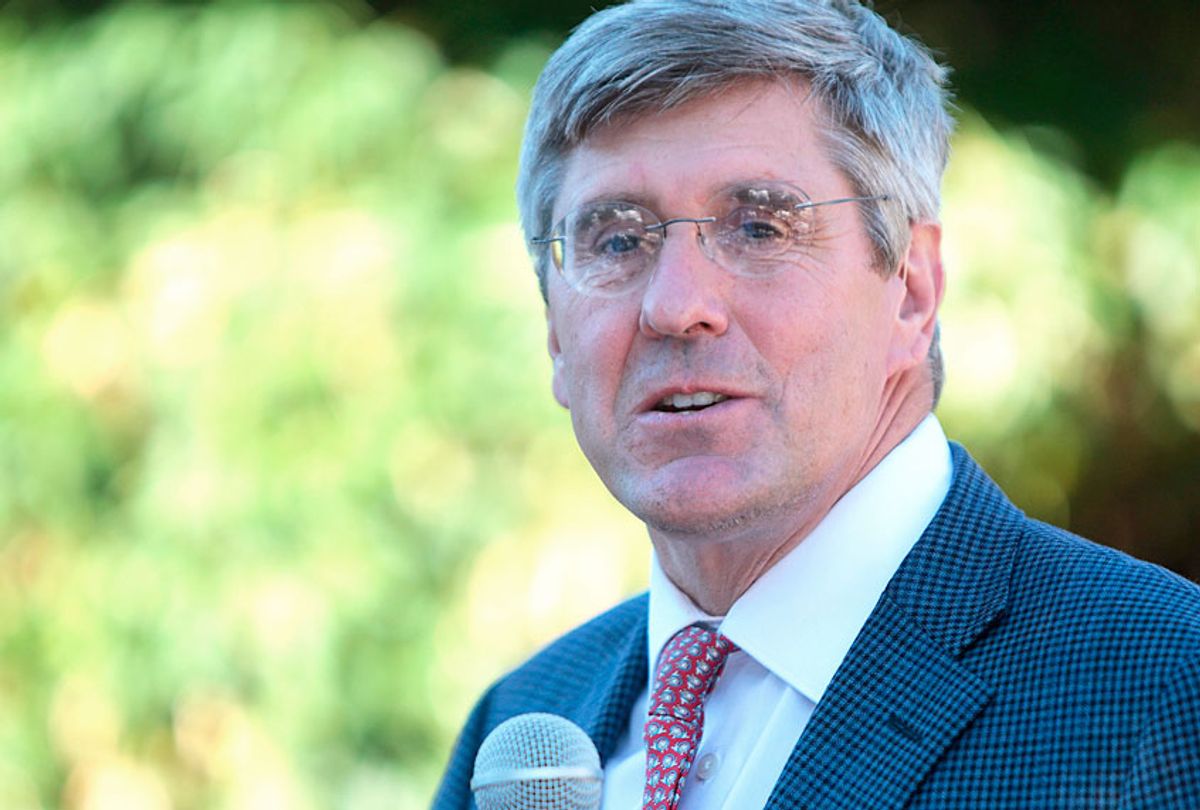 Stephen Moore, the economic commentator and former "Wall Street Journal" editorialist who President Donald Trump plans on nominating to serve as a governor of the Federal Reserve, appeared on ABC's "This Week" on Sunday to apologize for past sexist writings.

"Frankly, I didn't even remember writing some of these they were so long ago. They were humor columns but some of them weren't funny so I am apologetic; I’m embarrassed by some of those things I wrote," Moore told "This Week" host George Stephanopoulos. He later added that he does not support legislation to address the gender pay gap, telling Stephanopoulos that "when it comes to wages and gender equity, I want that to be decided by the market. I don't want government to intervene."

"Colleges are places for rabble-rousing. For men to lose their boyhood innocence. To do stupid things. To stay out way too late drinking. To chase skirts. (At the University of Illinois, we used to say that the best thing about Sunday nights was sleeping alone.) It’s all a time-tested rite of passage into adulthood. And the women seemed to survive just fine. If they were so oppressed and offended by drunken, lustful frat boys, why is it that on Friday nights they showed up in droves in tight skirts to the keg parties?" Moore wrote, according to The New York Times.

In a 2014 column for National Review, Moore argued that "the crisis in America today isn’t about women’s wages; it’s about men’s wages.

He added, "What are the implications of a society in which women earn more than men? We don’t really know, but it could be disruptive to family stability. If men aren’t the breadwinners, will women regard them as economically expendable? We saw what happened to family structure in low-income and black households when a welfare check took the place of a father’s paycheck. Divorce rates go up when men lose their jobs."

Moore has also drawn criticism for a comment he during a CNN panel discussion on sexual harassment in 2017.

"He said to me about two or three years ago something that I thought was very good advice for people who run companies, and this is very good advice, is that I would never have a meeting with a woman without someone else in the room. You all — and this is — unfortunately, this is where we’re at today," Moore exclaimed.

Moore has also made disparaging comments about women participating in men's sports, for instance complaining about women's involvement in college basketball by asking if there were any places left in life "where men can take vacation from women," according to CNN. He was held in contempt of court in 2013 for failing to pay $300,000 in child support to his ex-wife, Allison Moore. There have also been criticisms of Moore's selection on the grounds of his inexperience, with Bloomberg News reporting last month that Moore viewed his inexperience as an asset rather than as a problem.

“I’m kind of new to this game, frankly, so I’m going to be on a steep learning curve myself about how the Fed operates, how the Federal Reserve makes its decisions,” Moore, 59, said on BTV. “It’s hard for me to say even what my role will be there, assuming I get confirmed.”

He also tweeted on Friday, thanking Trump “for the opportunity to serve & for your zealous commitment to freeing the American economic engine from government overreach & oppressive taxation!”