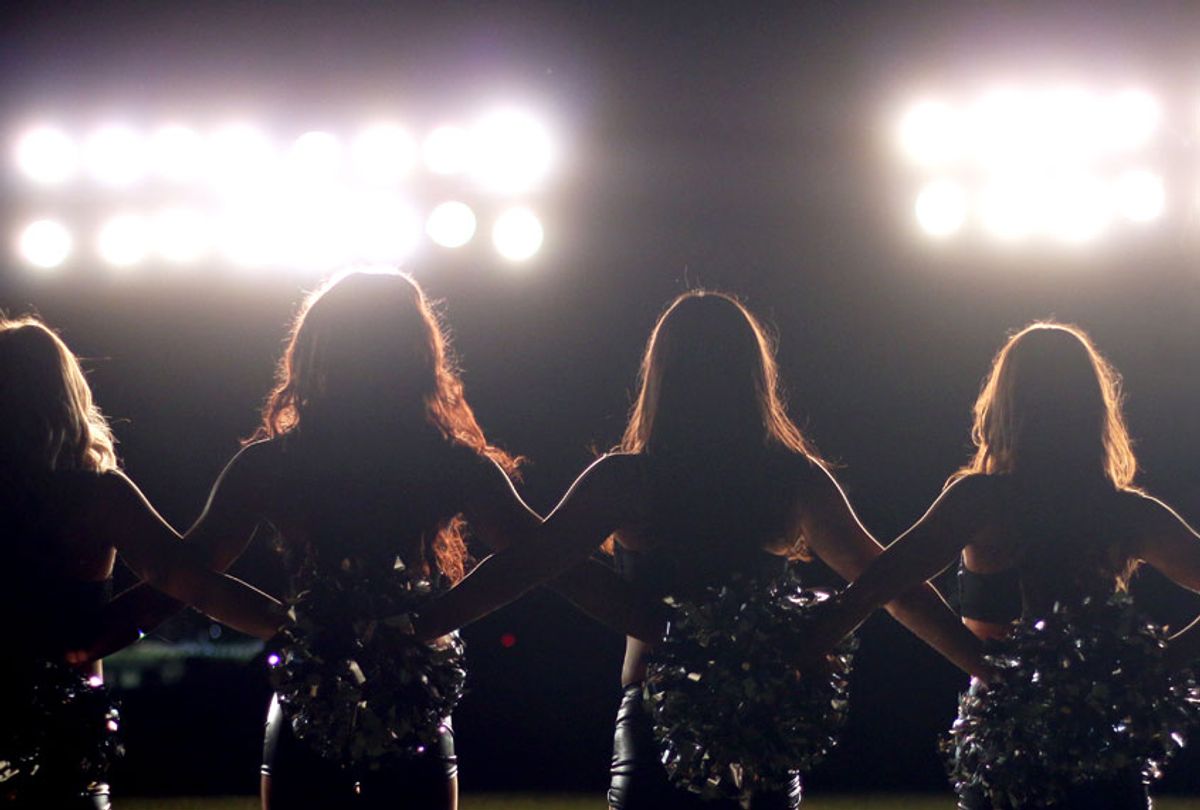 The NFL has a problem. I'm not referring to the silencing of black athletes who protest racial injustice like Colin Kaepernick and Eric Reid. Or the long, violent history of prominent players committing partner abuse (sometimes even on video) which is then swept under the rug by management. I'm not talking about the pervasiveness and deadliness of chronic traumatic encephalopathy (CTE) among the NFL's players, the brain disease connected to repeated blows to the head. Or the reality that for a predominantly black league, the management and team owners are almost all white.

"A Woman's Work: The NFL's Cheerleader Problem," a new documentary which premiered at the Tribeca Film Festival last weekend, chronicles another one of the NFL's most pressing predicaments: the 50-year tradition of illegal practices and wage theft of its cheerleaders. The film follows two former cheerleaders who were on the frontlines of this battle, fighting for fair pay and dignity for the labor of cheerleaders league-wide. According to "A Woman's Work," one-third of NFL teams with cheerleaders have now been sued "for wage theft, illegal employment practices and discrimination."

In 2013, before the mainstreaming of the #MeToo movement or the inauguration of Time's Up, before women flocked to Washington after the election of Donald Trump, an Oakland Raider's cheerleader referred to as Lacy T. was drowning in debt as she was forced to wait for a single paycheck to arrive after the end of an entire NFL season. On top of unpaid rehearsals and mandatory charity appearances, and compensated at less than a minimum-wage rate for her work, Lacy was also responsible for paying for her own transportation, specific beauty upkeep (including for the team's calendar shoot) and required clothing.

Suspecting foul play, Lacy, who is also the mother to a young daughter, shared the Raiderette contract with veteran labor rights attorney Leslie Levy. The attorney noted that in her entire career she had never seen an employee contract that contained more illegal provisions. The NFL is a multi-billion dollar industry, but "NFL cheerleaders are some of the lowest paid workers in America," Levy said.  In 2014, Lacy sued the Raiders.

"A lot of the publicity or conversation about that lawsuit was focused on sexism and double standards and gender equality," the film's director Yu Gu told Salon. "But I think the perspective of the people, the public, and journalists was still with a little bit of incredulity. They were still a little bit in disbelief of, 'Wow. How could this possibly happen in today's day and age? What is this? This is the NFL. They're backward. This is a very specific problem to a very specific culture.'"

"The thing that drew me to the story back in 2014 was that it's not just the NFL," she continued. "This is something that is a microcosm of the issues that we all face as working women."

"A Woman's Work" follows the ripple effect of Lacy's lawsuit. The illegal practices and wage theft she alleged turned out to be systemic throughout the NFL and yet also unique to its cheerleaders. NFL mascots and water boys are paid more than $60,000 per season, according to the film; concession workers are paid minimum wage plus gratuities. Only NFL cheerleaders were subjected to this league-wide gendered unpaid labor and below minimum wage compensation.

After Lacy's lawsuit, other teams across the country followed in her footsteps, and four more cheerleader lawsuits were filed. And once the #MeToo movement entered the mainstream, over a dozen more lawsuits were filed, spanning accusations of sexual harassment, discrimination and gender bias. "A Woman's Work" sheds light on some of these egregious practices and standards, including job requirements around cheerleaders' appearances and bodies, as well as their behavior. Maria, a former Buffalo Bills cheerleader, who also sued her team, describes how they were forced to perform jumping jacks in front of dance directors "to see if things were jiggling."

Both Lacy and Maria explain how they and scores of NFL cheerleaders before them were silenced for decades by manipulative tactics from leadership. They were told to be grateful; this opportunity isn't about the money; there are thousands of women who would gladly take your place.

Sympathetic to the cause, California Assemblywoman Lorena Gonzalez, who was also a Stanford cheerleader, proposed a bill in California that would mandate the NFL to treat its cheerleaders as protected workers, as opposed to independent contractors. "There are some things that are just American, and football and cheerleading, those top the list," she says in the film. "Well, unfortunately, nothing’s more American than cheating workers out of an honest day’s pay, too." The bill passed and other states have since proposed similar legislation.

Gu started filming "A Woman's Work" in 2014, and so the film shows Lacy and Maria navigating the lawsuits as well as the onslaught of criticism from multiple fronts, including ire from the NFL and its cheerleading leadership, and also resentment from their former teammates, many of whom accused them of being greedy and seeking fame rather than legal compensation. They also faced degradation from football fans and the general public, who undercut the women's righteousness with sexist taunts, like "You knew what you were getting into" or "You choose to dance half-naked anyway," as if that justifies unethical employment practices in an exorbitantly profitable industry.

"You're going to get paid what you're worth," is a line actually uttered from a Buffalo Bills fan in the documentary. It didn't help that after Maria filed the lawsuit, the Buffalo Bills cheerleaders were benched. Many people blamed the lawsuit rather than the alleged unethical practices of the NFL and its treatment of women.

As Maria's attorney, Sean Cooney, says in the film, "It’s a product of careless indifference both to a worker and to a woman, and I think it’s part of an industry that perceives itself as being untouchable because of its popularity."

DeMaurice Smith, executive director of the NFL's Player's Association, echoed a similar sentiment. "There’s more than enough money to go around," he says in "A Woman's Work." "But why do you find it necessary to take a group of women in a sport that’s wildly popular and make a decision to pay them far less than minimum wage? Because they can. And until somebody stops them, they will."

"Shame on you," Smith adds, emphatically. "And that starts from the commissioner, to every owner in the National Football League."

The Oakland Raiders eventually reached a $1.25 million settlement on the issue of wage theft, which included no admission of wrongdoing or apology, and the NFL has quietly implemented minimum wage for its cheerleaders. Lacy is portrayed as happy for their victories; and as a person who struggled to get by on the NFL's former wages, she knows that paying cheerleaders every two weeks and not requiring them to pay expenses out of pocket really matters to the women's livelihoods. But she still hopes for a more substantial reckoning. "All I ever wanted was the NFL, the commissioner, everyone to band together and just stand up and say, 'You know what? Yes, this happened,'" Lacy told Salon. "'We want to take responsibility now.'"

Even with the groundswell of women's movements placing pressure on institutions to be more accountable to how it treats women, the NFL has thus far been able to evade real responsibility or consequences. Gu says this speaks to how women's work, whether in the workplace or not, continues to be devalued in current society.

"In order for it to sustain its energy and in order for it to grow even, which I hope it does, I think that #MeToo, it just needs to be in a broader context of #MeToo for everybody," the filmmaker told Salon. "Everybody working across all different industries — women working, not just in the workplace, but women working outside the workplace, in the home — this invisible labor that we contribute to society and we need to be valued and respected for."

In this vein, Gu was intentional about showing the layers of women's work in the film. For Lacy, that meant raising her children; for Maria, planning a wedding and caring for her mother, who over the course of the film eventually succumbs to breast cancer. None of this work suspended because of their respective lawsuits, nor necessarily gets easier once the Raiders settlement comes in. Three years later, Lacy received a little more than $2,300 for her one season of underpaid work and another $10,000 for being the lead plaintiff in the class action suit. But what's clear in "A Woman's Work" is that they sacrificed so much — their dreams and ambitions, their identities as dancers and their community — to fight for fair pay on behalf of NFL cheerleaders nationwide.

"A woman's work is never-ending," Lacy says in the final moments of the film. "Women work hard in the home, outside the home, and they’re constantly having to say it and prove it and show it for it to be acknowledged."