Trump sues his own banks to thwart Congressional subpoenas 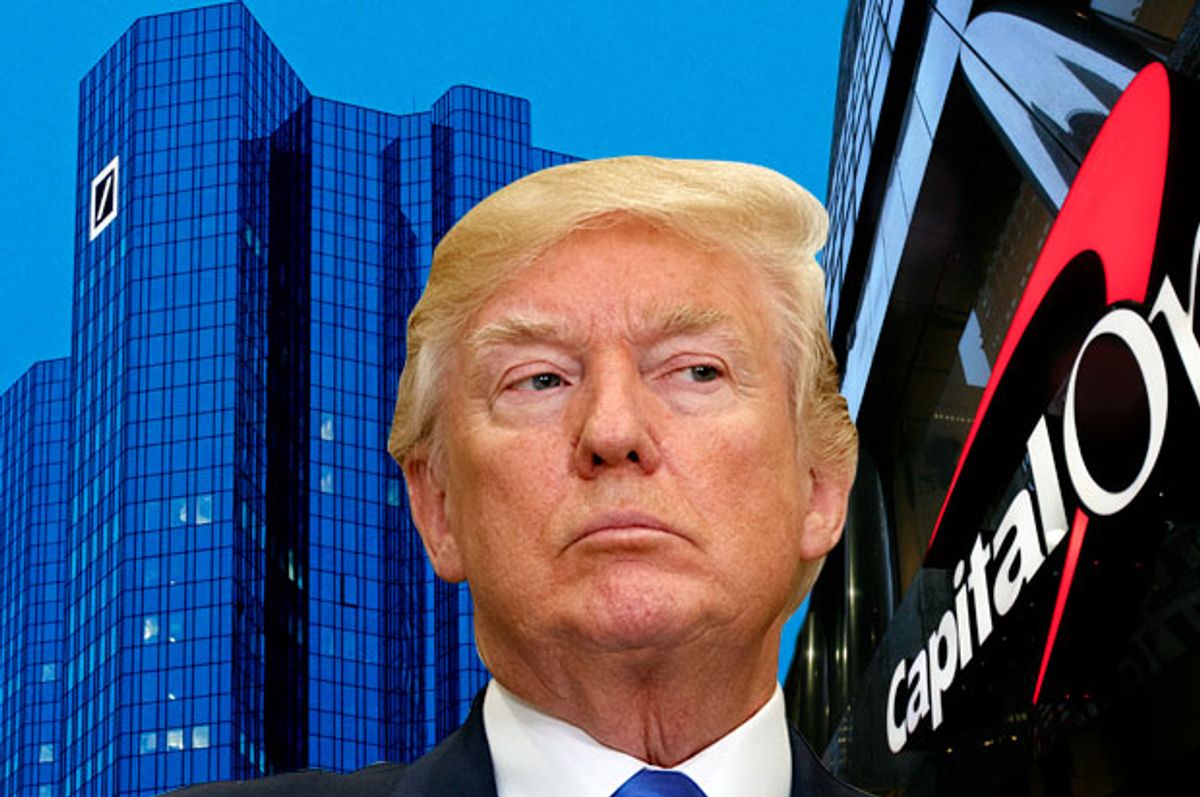 President Donald Trump is suing both Capital One and Deutsche Bank to prevent them from complying with congressional subpoenas into his financial records.

"The subpoenas were issued to harass President Donald J. Trump, to rummage through every aspect of his personal finances, his businesses, and the private information of the President and his family, and to ferret about for any material that might be used to cause him political damage. No grounds exist to establish any purpose other than a political one," Trump's attorneys wrote in the Monday complaint, according to CNN. Attorneys Will Consovoy, Marc Mukasey and Patrick Strawbridge also argued that the subpoenas, which have been issued by House Intelligence Committee Chairman Adam Schiff, D-Calif., and House Financial Services Committee Chairwoman Maxine Waters, D-Calif., are illegal.

"The subpoenas issued to Deutsche Bank and Capital One by Chairpersons Schiff and Waters are unlawful and illegitimate. They seek information going back decades from anyone with even a tangential connection to the President, including children, minors and spouses. Every citizen should be concerned about this sweeping, lawless, invasion of privacy. We look forward to vindicating our clients' rights in this matter," Trump's attorneys argued.

When issues a subpoena to Deutsche Bank two weeks ago, Waters explained in a statement that "the potential use of the U.S. financial system for illicit purposes is a very serious concern." She elaborated that her committee was "exploring these matters, including as they may involve the president and his associates, as thoroughly as possible pursuant to its oversight authority, and will follow the facts wherever they may lead us."

This lawsuit is the second act of litigation being undertaken by Trump to stop the House of Representatives from obtaining his financial records. Last week Trump's team sued the accounting firm Mazars USA and House Oversight Committee Chairman Elijah Cummings, D-Md., in order to likewise thwart attempts to obtain the president's financial records. Trump's lawyers warned Mazars in a letter sent earlier this month that they would face a lawsuit if they complied with the subpoenas.

"It is no secret that the Democrat Party has decided to use its new House majority to launch a flood of investigations into the president’s personal affairs in hopes of using anything they can find to damage him politically," Consovoy and an additional lawyer, Stefan Passantino, wrote Mazars USA.

They added, "The Democrats’ fervor has only intensified after the special counsel squelched their ‘Russia collusion’ narrative."

One possible reason to subpoena Mazars is that it would allow Congress to look into testimony by Trump's former attorney and fixer Michael Cohen alleging that the president has exaggerated the extent of his wealth.

"It appears that Donald Trump made a practice of wildly exaggerating his wealth and the supposed business acumen that enabled him to amass it," Laurence H. Tribe, the Carl M. Loeb University Professor and Professor of Constitutional Law at Harvard, told Salon last month.

Democrats in the House who issued the subpoenas two weeks ago condemned the lawsuit in a joint statement, calling it a ploy to “put off meaningful accountability as long as possible."

“The meritless lawsuit filed today by President Trump to block duly authorized subpoenas to nongovernmental entities is another demonstration of the depths to which President Trump will go to obstruct Congress’s constitutional oversight authority,” the Democrats said. “As a private businessman, Trump routinely used his well-known litigiousness and the threat of lawsuits to intimidate others, but he will find that Congress will not be deterred from carrying out its constitutional responsibilities.”

They added, “This unprecedented stonewalling will not work, and the American people deserve better.”