Islamophobia is about politics, not faith: New study explores impact on 2020 elections

Islamophobia is on the rise, with 44 percent of white evangelicals holding negative views of Muslims 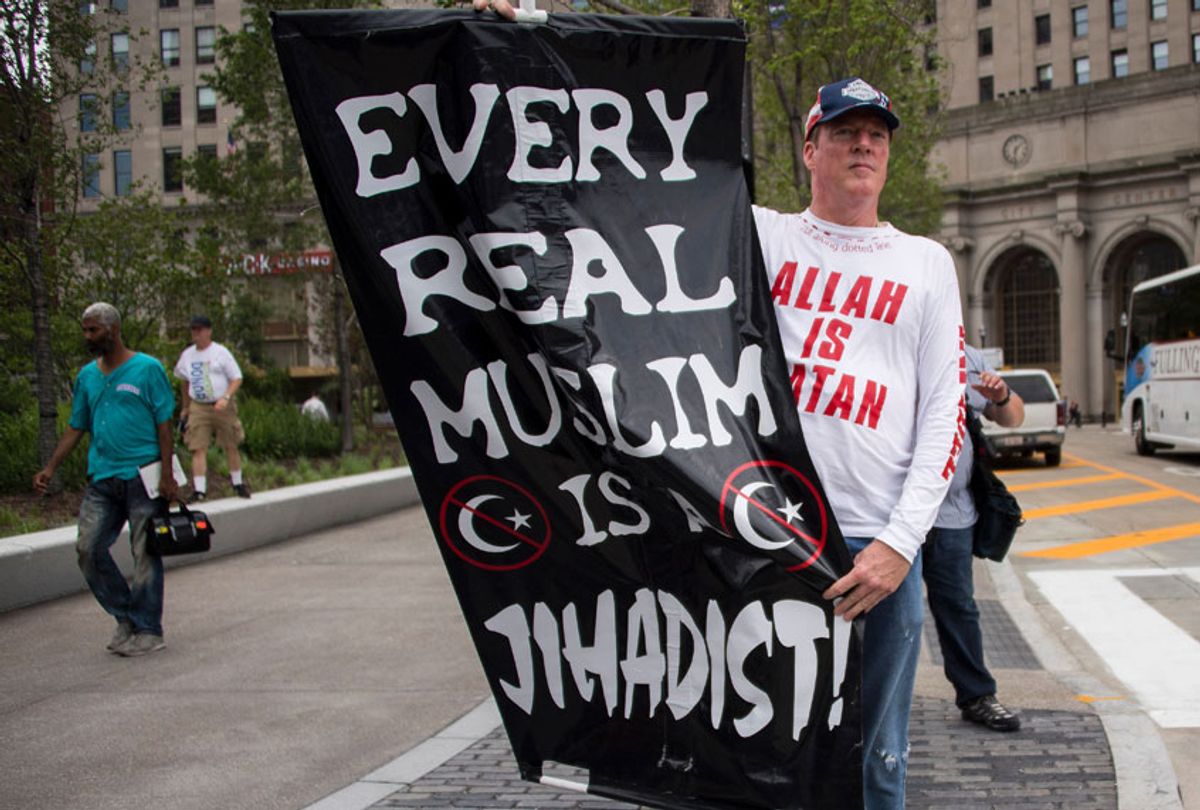 A Donald Trump supporter holds up an anti-Muslim poster as he awaits anti-Donald Trump protesters marching through the streets in Cleveland, Ohio, near the Quicken Loans Arena site of the Republican National Convention July 18, 2016. (Getty/Jim Watson)
--

Since the administration of George W. Bush and the attacks on 9/11/2001 there has been a marked demonization of Islam in U.S. public discourse. Over and over again an entire religion has been conflated with the acts of extremists. But Bush-era Islamophobia pales in comparison with its rise since the 2016 election, when Donald Trump decided to openly use the demonization of Muslims as a campaign tactic. Since then, there has been a measurable increase in anti-Islamic attitudes and violence in the United States.  A new study released by the Institute for Social Policy and Understanding (ISPU) offers data on predicting and preventing Islamophobia as well as valuable insight into how Islamophobia will shape the 2020 election.

The first key takeaway from the ISPU study is that Islamophobia is on the rise, especially in specific groups. Charting five negative stereotypes about Muslims, ISPU analysts documented an increase in the Islamophobia index from 24 in 2018 to 28 in 2019. But these numbers skew radically by faith group. Jews score the lowest in Islamophobic attitudes while white evangelicals score the highest. Fifty-three percent of Jews report having positive views of Muslims with only 13 percent reporting negative views. As many as 44 percent of white evangelicals hold unfavorable opinions about Muslims, which is twice as many as those who hold favorable opinions (20 percent).

These findings are especially noteworthy given Trump’s efforts to incite conflict between the Muslim and Jewish communities. Recall his recent speech stoking aggression towards Rep. Ilhan Omar (D-MN). "Oh, I forgot. She doesn't like Israel” he stated sarcastically in a speech to the Republican Jewish Coalition as the crowd booed. "I forgot. I'm so sorry."

As USA Today reports, these efforts are a not-so-subtle effort by the Trump team to capture more of the Jewish vote by suggesting that Democrats have become “anti-Israel” and “anti-Jewish.” They quote a recent Gallup report, based on tracking poll data from 2018, that found that only "one in six U.S. Jews identify as Republican." And about half described themselves as Democrats.

Even more interesting were the ISPU’s findings regarding the Muslim Ban. They found that for most voters a candidate’s approval of the ban is a negative. Sixty-one percent of Muslims, 53 percent of Jews, and 56 percent of non-affiliated Americans report that a candidate’s endorsement of the Muslim Ban would actually decrease their support for that individual. And yet, with white evangelicals it is a different story. In fact, 44 percent say a candidate’s endorsement of the ban would increase their approval.  But here is the real surprise: even though white evangelicals are the one group most likely to support this policy, the overall majority either indicated that support for the ban either decreased their interest (19 percent) or made no difference to them (37 percent).  These findings indicate that the Muslim Ban plays only to a vocal minority, even among White Evangelical voters.

Perhaps more importantly, the ISPU study shows that those who hold negative views of Muslims are the ones least likely to actually know one. Given that about only one in three white evangelicals reported knowing an American who is Muslim, this finding reinforces the idea that Islamophobia is based almost entirely on the proliferation of negative stereotypes absent any real-world knowledge.  The analysts further found that knowledge of the religion of Islam often had an even greater impact in reducing Islamophobia than personal relationships with Muslims. This means that it is not necessary to have a Muslim friend to combat Islamophobia. It also suggests that when the religion is negatively portrayed for political ends to voters with no knowledge of the religion, voters may be more easily swayed to hold negative views.

Heading into the 2020 election it is unsurprising, but still noteworthy, that only 16 percent of American Muslims support President Trump but 73 percent of white evangelicals do. Broken down by faith, U.S. Muslims are the least likely to support Trump of any other group.  Yet they are also more likely than the general public to express optimism about the direction of the country: Thirty-three percent of Muslims report being satisfied as compared to only 19 percent of the general public.

Party affiliation among American Muslims is also unsurprising with 76 percent having voted for Democrats in the 2018 election.  The study documents a growing trend of registration for eligible Muslim voters. In 2016 only 60 percent were registered in comparison with 73 percent registered in 2019. Yet, they also note that Muslims who indicate a desire to vote, may not actually do it. In 2018, 83 percent of registered voters stated they planned to vote, but only 59 percent did.

In a phone interview with Salon, ISPU researcher Dalia Mogahed explained that another key takeaway for the 2020 election is the fact that intolerance towards one group correlates positively with intolerance towards other groups. That means that those who are Islamophobic are far more likely to also be anti-Semitic and anti-LGBT, for example.  She suggests that the crisis of Islamophobia affects not only Muslims, and even more importantly it indicates increased risk of not just intolerance towards vulnerable populations, but violence as well.  Certainly, the San Diego synagogue attack offers a recent example of the connections between anti-Semitism and Islamophobia. Mogahed explains that “empirical research shows that anti-Semitism and Islamophobia are inextricably linked.”

She further added that the ISPU study confirmed that Islamophobia is generated by politics rather than faith. She cautioned that it would be wise to take into account efforts, whether Russian propaganda or not, to use Islamophobia to sow division and political conflict. This is perhaps the most important takeaway from the study.

Across the globe we have seen anti-Muslim extremism rise as a tactic to mobilize fear and incite aggressive attitudes for political gain.  And within the United States, as Jonathan Chait points out, we can note that Republicans have resisted acknowledging Donald Trump’s open bigotry towards Muslims. There seems little doubt that the Trump team will continue to use Islamophobia as a political tactic and there is proof that those tactics have escalated negative attitudes and violence towards Muslims.  The only question is whether the 2020 elections will be shaped by the moderate majority or the extremist fringe.