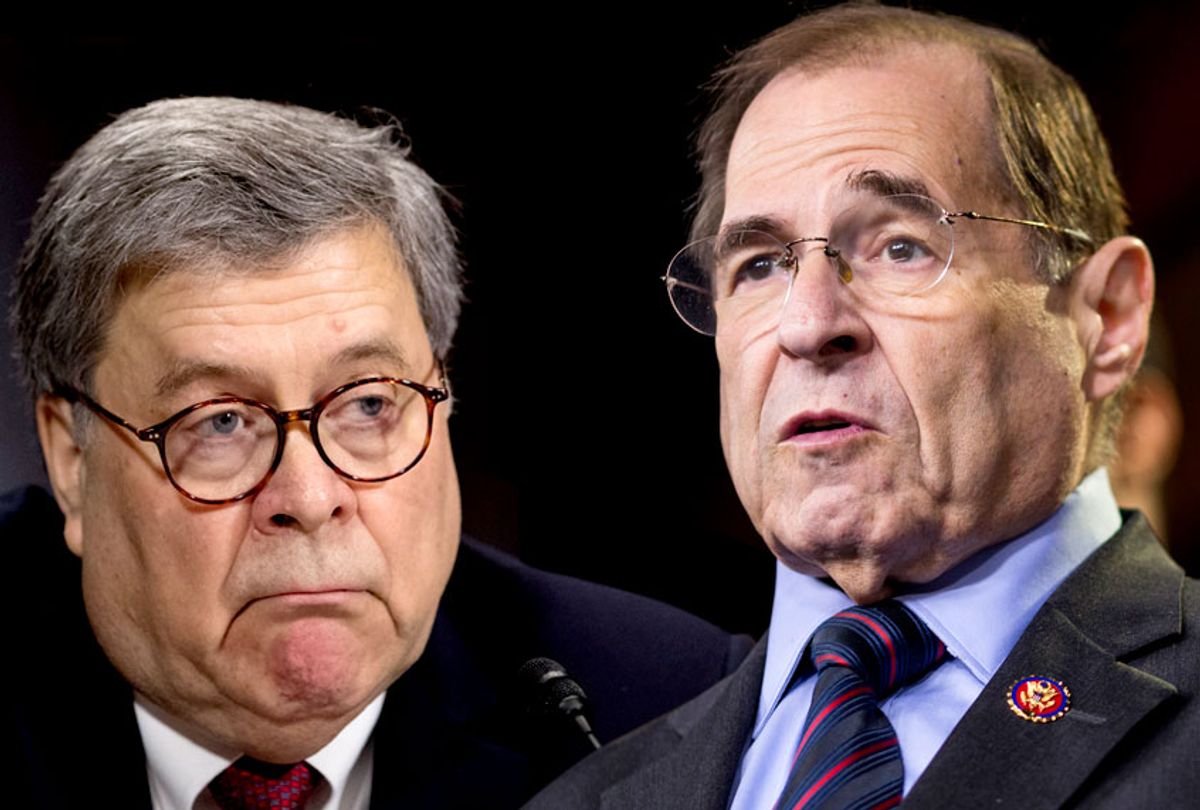 Democrats on the House Judiciary Committee plan to vote Wednesday on whether to hold Attorney General William Barr in contempt of Congress after he failed to comply with a subpoena to provide lawmakers with an unredacted version of special counsel Robert Mueller's report.

The panel had set a deadline of 9 a.m. ET Monday for Barr to turn over a complete version of Mueller's 448-page report on Russian interference in the 2016 presidential election, as well as the report's underlying evidence. It subsequently announced the planned vote in a statement.

"Even in redacted form, the special counsel's report offers disturbing evidence and analysis that President Trump engaged in obstruction of justice at the highest levels," the panel's chairman, Rep Jerry Nadler, D-N.Y., said in the statement. "Congress must see the full report and underlying evidence to determine how to best move forward with oversight, legislation and other constitutional responsibilities."

"The attorney general's failure to comply with our subpoena after extensive accommodation efforts leaves us no choice but to initiate contempt proceedings in order to enforce the subpoena and access the full, unredacted report," Nadler continued.

The House Judiciary Committee had initially demanded that Barr turn over a copy of Mueller's unredacted report, as well as the underlying documents, by May 1. The panel made Barr a counteroffer after he missed that deadline.

The congressional Democrats' move to hold the attorney general in contempt escalates the fight between the White House and Congress over the Democrats' congressional oversight requests. President Donald Trump has refused to cooperate and vowed to fight "all the subpoenas" issued by House Democrats, while Democrats insist they are fulfilling their oversight role.

In a 27-page report, the House Judiciary panel outlines why the committee is demanding Mueller's full report — and mentions the prospect of impeachment.

"[T]he Committee needs to review the unredacted report, the underlying evidence and associated documents so that it can ascertain the facts and consider our next steps," the report reads. It says the findings may warrant legislative action or other steps, including the approval of "articles of impeachment with respect to the president or any other administration official, as well as the consideration of other steps such as censure or issuing criminal, civil or administrative referrals."

In a Monday statement, Nadler said he would consider postponing Wednesday's contempt proceedings if the Department of Justice "presents us with a good faith offer for access to the full report and the underlying evidence."

Rep. Doug Collins, R-Ga., the top Republican on the House Judiciary Committee, responded to Monday's news by accusing Nadler of "smearing" Barr as a result of being unhappy with the results of Mueller's report.

The Justice Department has stated that revealing grand jury material in response to congressional oversight requests is prohibited by federal secrecy rules in the absence of a court order, but Nadler has argued that courts have disclosed grand jury material to Congress under the "judicial proceeding" exception in the past.

Barr last week refused to testify before the House Judiciary Committee, rejecting committee members' plans to have a counsel question him alongside lawmakers. The move angered Democrats, nudging them closer to holding Barr in contempt of Congress.

In the contempt resolution, Nadler highlighted the ongoing threat of Russian election interference as one of the reasons Democrats are seeking to view the complete version of Mueller's report. Sections of the publicly-released version of Mueller's report detailing the actions of Russia's "Internet Research Agency" (IRA) and other Russian hacking operations "contain significant redactions, which impair the ability of the Committee to gain a complete understanding of Russia’s actions," the contempt report states.

The Democratic-led Judiciary panel is likely to vote in favor of contempt unless the Justice Department fulfills the Democrats' demands prior to Wednesday's deadline. The full House would then have to hold a vote, the timing of which would be determined by Speaker of the House Nancy Pelosi, D-Calif.