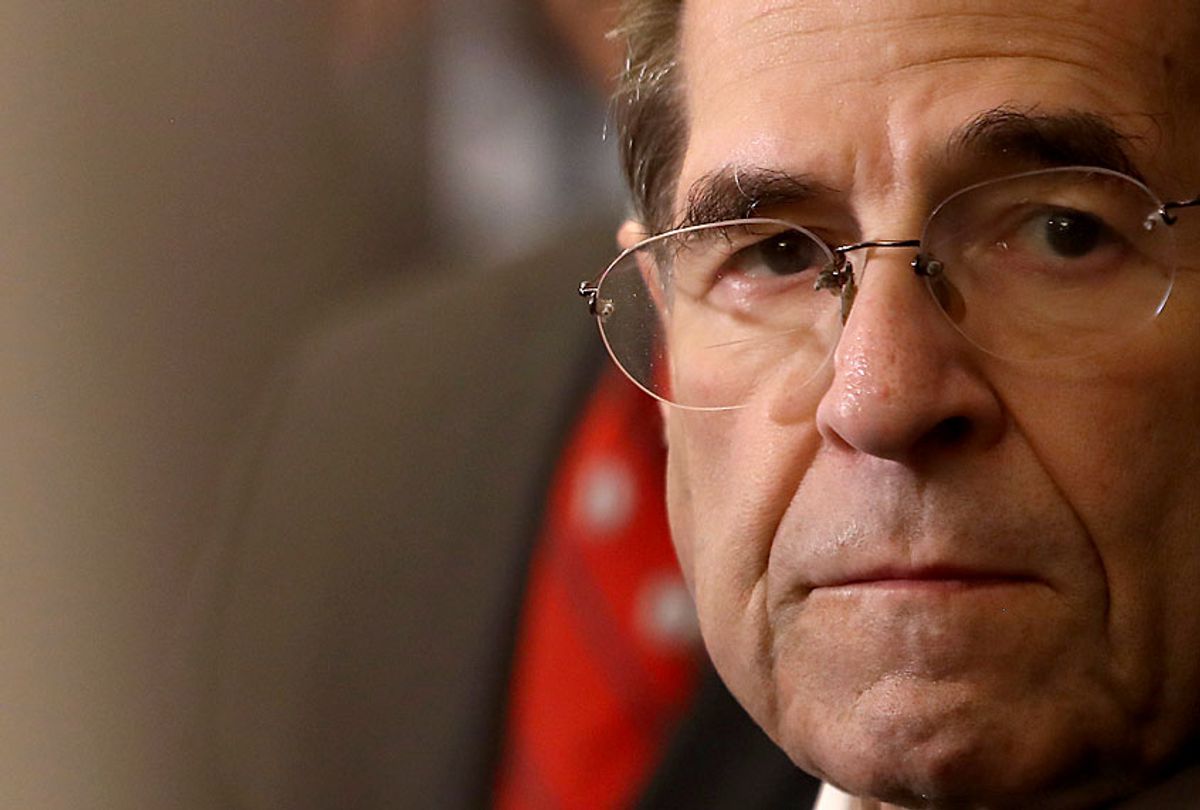 Democrats on the House Judiciary Committee have subpoenaed special counsel Robert Mueller's full report following the release of a redacted version Thursday by the Department of Justice, marking the first step in what is expected to be a lengthy legal battle against President Donald Trump's administration for access to all of the special counsel's findings.

"I am open to working with the department to reach a reasonable accommodation for access to these materials, however I cannot accept any proposal which leaves most of Congress in the dark, as they grapple with their duties of legislation, oversight and constitutional accountability," Nadler said in a statement.

The move comes one day after Barr released a redacted version of Mueller's nearly 448-page report detailing the special counsel's nearly two-year investigation into allegations of collusion between Trump's campaign and Russia during the 2016 presidential election and whether the president himself had obstructed the inquiry.

Mueller, in his report, does not find that the president or his campaign coordinated with Russia. He also does not reach a conclusion on obstruction of justice, although he discloses ten episodes of possible obstruction by the president.

Nadler's subpoena requests the special counsel's full report, as well as for the "underlying evidence" of the investigation, including evidence collected by the grand jury, in spite of a federal procedural rule that requires grand jury material to remain secret.

Barr has remained steadfast behind this rule and previously noted that the "restriction protects the integrity of grand jury proceedings and ensures that the unique and invaluable investigative powers of a grand jury are used strictly for their intended criminal justice function." He said he does not intend to ask the judge presiding over the special counsel's grand jury to permit the release of evidence collected by the grand jury, and Nadler could make that request himself.

"I'm committed to ensuring the greatest degree possible of transparency concerning the special counsel's investigation consistent with the law," Barr said Thursday, adding that the report contains only "limited redactions," none of which were the result of executive privilege.

The Democrats have scrutinized the propriety of the decisions made by Barr since he received Mueller's findings late last month. The attorney general set off a political firestorm after he released a four-page summary of the special counsel's report to Congress, in which he revealed that Mueller did not conclude whether Trump had obstructed justice and said he and his deputy, Rod Rosenstein, determined Mueller's findings were "not sufficient to establish that the president had committed an obstruction-of-justice offense." Democrats have dismissed Barr's conclusion, arguing it is incomplete, insufficient and warrants further examination and the release of the full report.

The attorney general came under further scrutiny Thursday after he described Trump's personal strife throughout Oval Office tenure time, leading one reporter at the press conference to ask why he appeared to express sympathy toward the president's situation.

"In assessing the president's actions discussed in the report, it is important to bear in mind the context," Barr said. "President Trump faced an unprecedented situation."

"As he entered into office and sought to perform his responsibilities as president, federal agents and prosecutors were scrutinizing his conduct before and after taking office and the conduct of some of his associates," he continued. "At the same time, there was relentless speculation in the news media about the president's personal culpability. Yet, as he said from the beginning, there was in fact no collusion. And as the special counsel’s report acknowledges, there is substantial evidence to show that the president was frustrated and angered by a sincere belief that the investigation was undermining his presidency, propelled by his political opponents and fueled by illegal leaks."

Trump has praised Barr's review, claiming it to be a "total and complete exoneration." The president on Friday pushed back against descriptions of his behavior in the report, which he called "total bulls**t."

In a series of morning tweets, Trump lamented that he was not able to respond to statements made in the report about him, because he chose not to testify during the nearly two-year investigation. Mueller, in his report, revealed that his office tried to get an interview with the president for more than a year, but Trump and his lawyers resisted.

"Statements are made about me by certain people in the Crazy Mueller Report, in itself written by 18 Angry Democrat Trump Haters, which are fabricated & totally untrue," Trump tweeted Friday. "Because I never agreed to testify, it was not necessary for me to respond to statements made in the 'Report' about me, some of which are total bullshit & only given to make the other person look good (or me to look bad)."

"It can't be possible with all the detail that some of it was wrong," Giuliani said in an interview with "Fox & Friends."

He also tried to excuse some of the president's conduct, as described by Mueller.

"You have to see it in the light of a man who is being accused of a crime that he did not commit," he said.

White House press secretary Sarah Sanders said Friday that she hopes the country can "move on" now that Mueller's report has been released.

"The big takeaway . . . is that there wasn't collusion with Russia and it should be a day that every American can celebrate and not be sorrowful like we've seen over the last 48 hours from the Democrats that are actually sad that the president didn't work as a foreign agent," she said during an appearance on ABC's "Good Morning America."

"I hope that collectively as a country we can move on, because great things can happen under this president just as they have over the last two and a half years," she added.

She also defended herself against claims in Mueller's report that she lied to the press in May 2017 when she told reporters that the White House had heard from "countless members of the FBI" who had lost faith in former FBI Director James Comey. According to Mueller's report, the press secretary's statement was "not founded on anything."

"It was the heat of the moment, meaning that it wasn't a scripted talking point," Sanders said. "I'm sorry that I wasn't a robot like the Democrat Party that went out for two and a half years and stated time and time again that there was definitely Russia collusion between the president and his campaign."