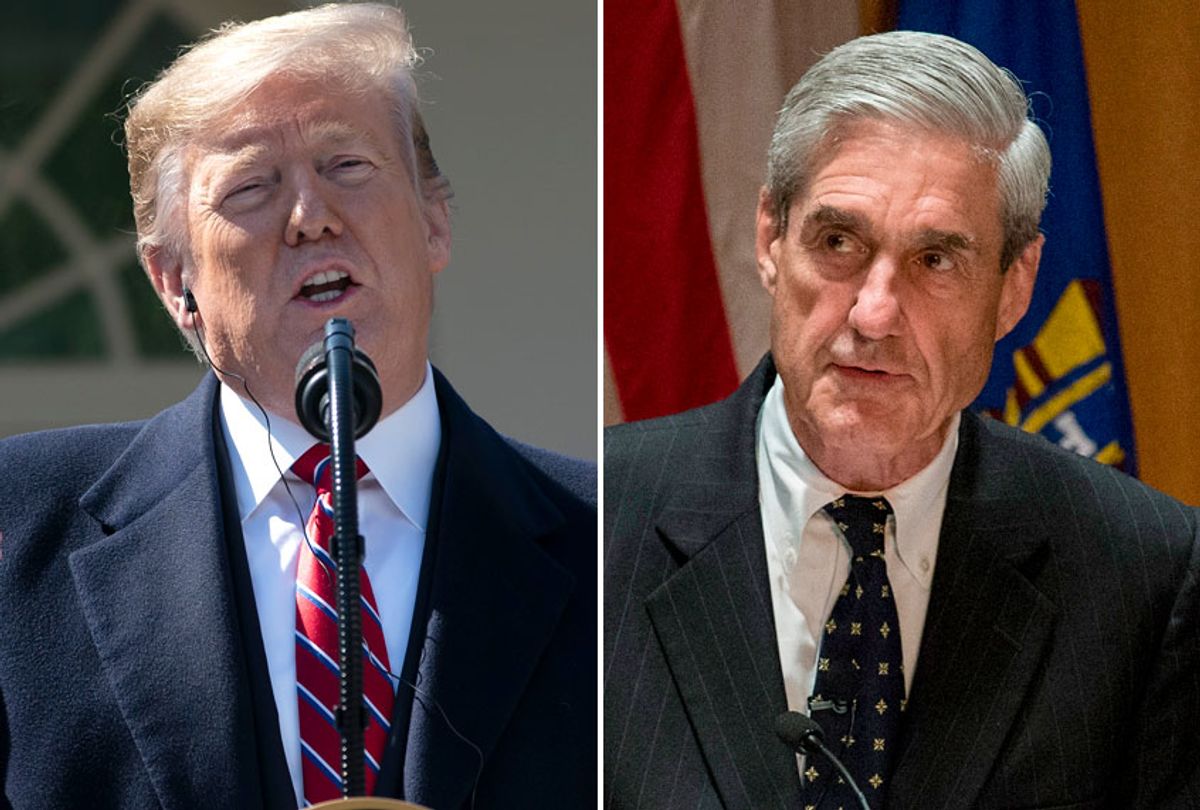 "We noted, among other things, that the president stated on more than 30 occasions that he does not 'recall' or 'remember' or have an 'independent recollection' of information called for by the questions. Other answers were 'incomplete or imprecise,'" Mueller wrote in his report detailing his wide-ranging probe into allegations of collusion between Trump's campaign and Russia during the 2016 election and whether the president himself had obstructed the inquiry.

"The written responses, we informed counsel, 'demonstrate the inadequacy of the written format, as we have had no opportunity to ask follow-up questions that would ensure complete answers and potentially refresh your client's recollection or clarify the extent or nature of his lack of recollection,'" the special counsel added.

A redacted version of the special counsel's 448-page report was published Thursday on the Justice Department's website, shortly after Attorney General William Barr held a press conference with his deputy, Rod Rosenstein, to discuss Mueller's findings.

In a report appendix, the special counsel wrote that his office sought an interview with Trump for more than a year, beginning in December 2017, and considered an interview "vital to our investigation." Mueller said he weighed issuing a subpoena for the interview, but he ultimately decided it against it because the investigation had already "made significant progress."

"We thus weighed the costs of potentially lengthy constitutional litigation, with resulting delay in finishing our investigation, against the anticipated benefits for our investigation and report," he stated in the report. "We determined that the substantial quantity of information we had obtained from other sources allowed us to draw relevant factual conclusions on intent and credibility, which are often inferred from circumstantial evidence and assessed without direct testimony from the subject of the investigation."

The criticism stands in stark contrast to the attorney general's declaration on Thursday that the White House had "fully cooperated" with the investigation.

In his report, Mueller identified ten documented episodes of possible obstruction by Trump but said he was not able to clear the president of obstructing justice.

"The evidence we obtained about the president's actions and intent presents difficult issues that prevent us from conclusively determining that no criminal conduct occurred," Mueller stated. "Accordingly, while this report does not conclude that the president committed a crime, it also does not exonerate him."

Since the special counsel wrapped up his investigation late last month, a central question facing the Justice Department has been why Mueller's team decided to punt on whether Trump obstructed justice or not. The decision was complicated, the report said, by two key factors: Under decades-old guidelines by the department's Office of Legal Counsel, a sitting president cannot be indicted and put on trial, and a criminal charge against a sitting president would "place burdens on the president's capacity to govern and potentially preempt constitutional processes for addressing presidential misconduct."

Barr and Rosenstein on Thursday said they "disagreed with some of the special counsel's legal theories and felt that some of the episodes did not amount to obstruction as a matter of law," although they accepted Mueller's "legal framework."