Knights don't cry: "Game of Thrones" and the weight of a woman's tears

Spoilers! Every working woman knows what crying in public does to her reputation. That's just as true in Westeros 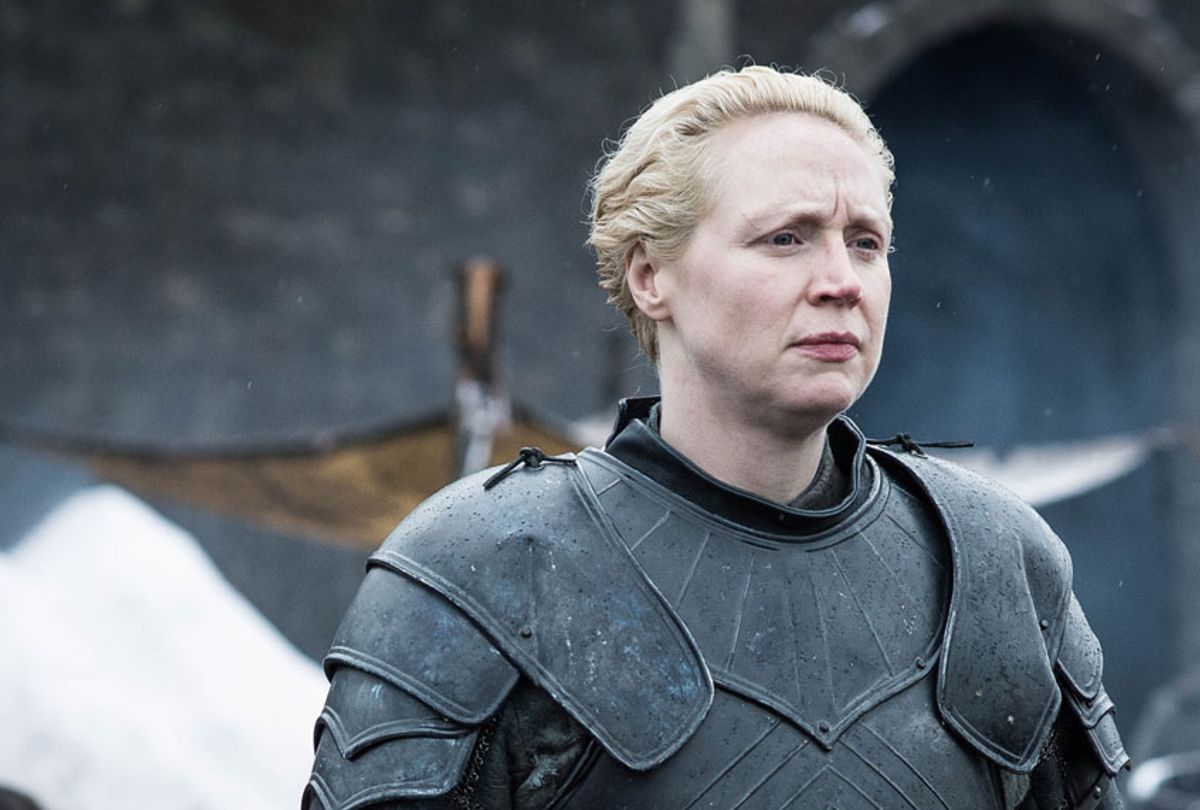 Spoiler alert: This story discusses a specific plot development in the "Game of Thrones" episode titled "The Last of the Starks." Steer clear if you haven't seen it or keep reading and accept that what happens next is entirely on you.

Every woman working in what is perceived to be a man’s profession knows some version of this truth: “There’s no crying in baseball.” Tears signify vulnerability and weakness, two traits nobody respects in a leader or a trailblazer.

The moment a respected woman’s eyes get all leaky over just about anything that isn’t death,  every negative notion her adversaries harbor about her becomes fact. Women who cry can’t hack the pressure. Tears are natural and healthy, but champions don’t cry in public spaces. Why? Because there's no crying in baseball.

This is why Brienne of Tarth’s blubbering breakdown at Jaime’s entirely predictable abandonment of her to return to Cersei in "The Last of the Starks," the fourth episode of the “Game of Thrones” finale season, has fired up such a debate. Her tears are either absolutely understandable — strong women also cry! — or a violation of everything fans have come to know about her character.

In either event, it’s demonstrative of a larger problem D.B. Weiss and David Benioff’s eight seasons' worth of scripts have highlighted, which is the ignorance with which men write their female protagonists.

Only two women have ever received full or partial writing credit on episodes in the entire history of “Game of Thrones,” and that shows whenever the series comes to a juncture that requires its writers to create complex scenes that tap into the interior lives and psyches of its female characters — particularly the women who are leaders, or unique with regard to their station.

In doing so, the showrunners also reveal how they feel about a particular woman’s role in this world. The answers in these last hours of the series haven’t been particularly flattering.

Among the main contenders for the Iron Throne are a woman who gets off on cruelty and another whose desire to rule has all but devoured her value of human life, along with a man who has led reluctantly and abdicated his leadership as soon as any major crisis that needs solving has passed.

None of them are public weepers except, well, when staring into the face of a dead loved one. Crying over the dead is totally OK. Even Jon Snow wept over the demise of his dead Ygritte . . . we think. That battle scene, like others, was very dark.

We’ve also been treated to more focus lately on cool-headed Sansa Stark, who has emerged as a praiseworthy strong and wise leader with tremendous foresight and strategic acumen, to whom nobody listens even when she knows she’s right time and again. That level of frustration would drive anyone to tears after a while. But Sansa does not cry in front of others. She knows better.

So, too, should Brienne. Especially Brienne, a medieval noblewoman who — like Arya Stark, another non-cryer — displays such expertise, power and will to dominate in an arena that bars entry to women. Arya and Brienne are born fighters obsessed with becoming the best duelists in the land, if not the world.

Arya does not cry— not when she witnessed her father’s execution, not when she glimpses Walder Frey’s men parading the headless body of her brother Robb around with his direwolf’s head crudely jammed onto the neck stump.

These women are fantasy characters, but the challenges they face are more or less the same as those facing any woman who has risen to the top of her field in business management or politics. Study after study show that in matters of business or political leadership, women are still viewed as less able to control their emotions, and just as often penalized for displaying emotions that convey a sense of power. Emotional instability is still cited as a reason voters decide women are less fit for office than men, for example.

So if you're asking yourself what's wrong with showing a ferocious, capable female character being reduced to tears — in her housecoat, in the middle of the night, while begging the man she loves not to go — the answer is it confirms long standing biases about a woman's emotional stability.

Television and movies are packed with subtle messages about gender-based power dynamics as well, particularly around vulnerability and sexuality. And "Game of Thrones" has demonstratively indulged in many of them, usually in the form of exploiting female nudity or sexuality to make a point about another character's manliness.

When a character like Brienne cries over a man, please believe that is an intentional choice on the part of the creators. Regardless of all Brienne has accomplished to become the first Ser in all of Westeros, it lets us know that she is still a vulnerable woman who dared to believe in love. Brienne can accept the unpredictability of battle, but not the unpredictability of a man addicted to his evil sister.

Brienne, as the series has heretofore constructed her, is a woman who exists in a world that requires her to operate on a level of high ability and uncompromised ethics and keep her expectations of what she’ll get in return very, very low. Those kinds of women might shed a tear, but they don’t lose control when disappointed, not even by the likes of Jaime Lannister.

Brienne, however, long had her heart set on becoming a knight, even though tradition dictates that honor can only go to men. So, like all women driven to climb political ladders, she checks all the boxes she can, even performing extra credit: Not only does she over-index on the part about loyalty and honor, she dresses in trousers, cuts her hair short and all but neuters any hints about her sexuality.

And part of that requires the erasure of all emotion, hence her perpetual scowl for most of the series, save for the moments when horror stares her in the face. She cries at losing Renly, not merely out of love but because she knows what her failure signifies to anyone doubting her ability as a fighter. But Catelyn Stark, another woman who leads, is present to witness Renly’s unbelievable murder by shadow, and helps Brienne escape.

The moment Catelyn reminds Brienne that she can’t avenge Renly if she’s dead, she gathers her game face and presses on.

Honestly, this is a woman who endures insults almost constantly, who lived through the humiliation of being dressed in a terrible gown and lowered into a pit with a hungry bear, armed with nothing but a wooden sword.

Even then, she does not cry.

Granted, there’s something to the argument that heartbreak is far more painful than the careless swipe of an animal’s sharp claws. Both Jaime and Brienne let their guard down after the battle is won and, for a moment, each entertain the hope of a fresh start in a better world.

And while there’s an entirely different conversation to be had over how realistic it is for the writers to jettison several seasons’ worth of moral evolution for the sake of moving Jaime to his predestined place on the board for the series’ endgame, his swift reversion is more believable than Brienne’s uncontrollable at losing him.

Sers Jaime and Brienne are both knights now, and people who spent years operating at a certain behavioral baseline to maintain their reputation and to survive. In the tenderest moments between Brienne and Jaime prior to the Battle of Winterfell, there is much said between them without betraying any hint of expressiveness. That is the way of knights: personal feelings aside, they’re committed to business. How annoying it is for “Game of Thrones” to undermine this by revealing that underneath all Brienne’s hard armor is a soft, lovelorn lady one slight away from an ugly cry. It's unbecoming not because she's isn't entitled to her emotions, but because she lives in a world that has denied that and so much else to her for all her life.

Ser Brienne of Tarth knows there's no crying in baseball. How unfortunate that at this late hour Benioff and Weiss didn't trust the dramatic potential of that bitter knowledge. Because the only thing more gutting than watching anyone fall to pieces as their heart is broken is seeing her retreat to the emotional disconnect that has shielded her all her life. That's a colder, darker thought, but in these last moments we get with Brienne of Tarth, seeing her replace the armor that's served her well for her entire life might have been a more fitting and poetic end to a knight's affair.