Joe Biden holds a commanding 21-point lead over the 2020 Democratic field, according to a new poll 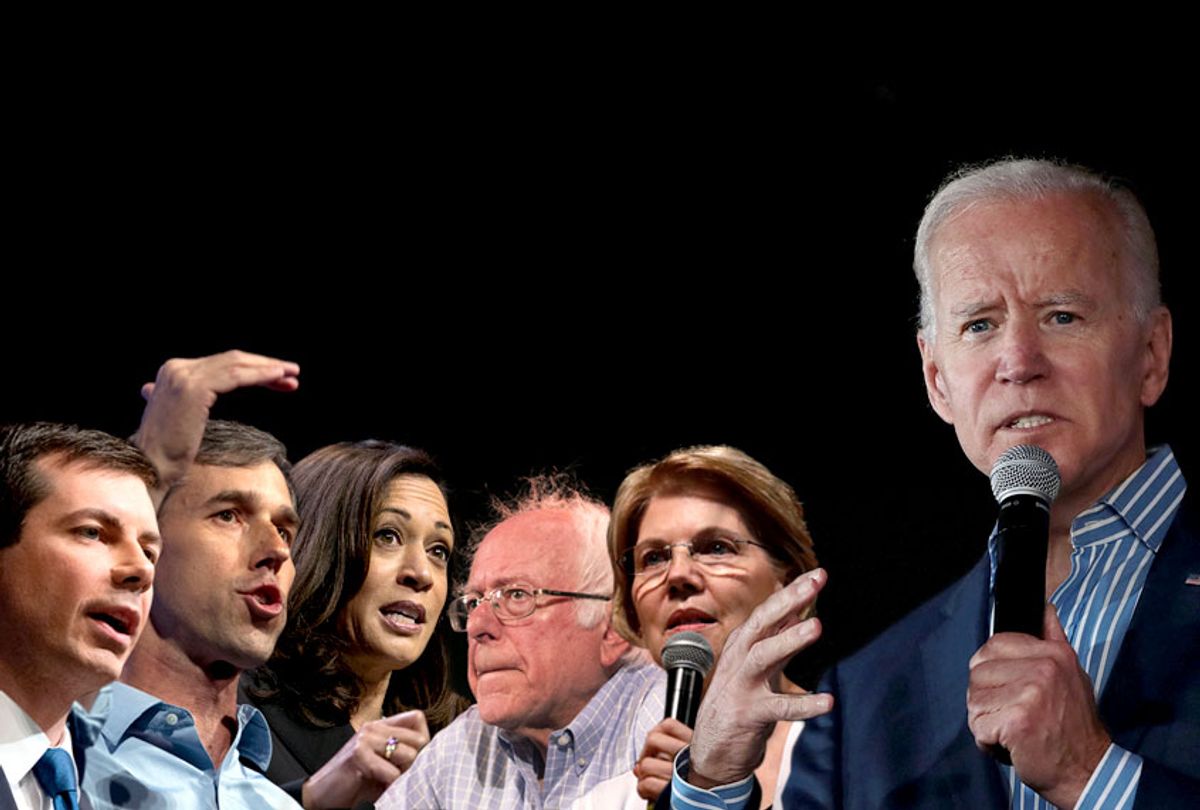 Former Vice President Joe Biden holds a commanding national lead over the 2020 Democratic presidential field, according to the results of a new poll released Monday night.

The survey conducted by Morning Consult finds that Biden is the first choice of more than a third of voters who plan to cast a ballot in their state's Democratic primary or caucus. Forty percent of respondents name the former vice president as their top pick to run against President Donald Trump next year. That's a 4-point bump from last week's Morning Consult survey, when Biden led the pack with 36 percent support.

Biden's surge in support gives him, at least according to the poll, a double-digit lead over his next-closest rival: Sen. Bernie Sanders, I-Vt., who is at 19 percent. Sen. Elizabeth Warren, D-Mass., is in third place with 8 percent, followed closely by Sen. Kamala Harris, D-Calif., at 7 percent and South Bend, Ind. Mayor Pete Buttigieg at 6 percent, former Rep. Beto O'Rourke, D-Texas, at 5 percent, Sen. Cory Booker, D-N.J., at 3 percent and Sen. Amy Klobuchar, D-Minn., at 2 percent.

The latest poll reveals Biden gained support after he officially threw his hat into the presidential ring late last month. He jumped 10 points in Morning Consult's polls of the 2020 Democratic primary field since he launched his presidential campaign on April 25.

Biden's burst of support has appeared to come at the expense of Sanders, who has experienced a 5-point dip since Biden announced his candidacy. Buttigieg has also seen a drop in support in the last two weeks, slipping by 3-points.

The survey reveals that Biden's large lead over the Democratic primary field grows even more when looking at his support solely among primary voters in Iowa, New Hampshire, Nevada and South Carolina. In the early nominating states, 44 percent of likely Democratic voters said they would support Biden, while 20 percent said they favor Sanders. Warren, again, comes in third at 6 percent, followed by Harris and Buttigieg at 6 percent. Booker is at 4 percent, O'Rourke is at 3 percent, and entrepreneur Andrew Yang and Klobuchar tie at 2 percent.

The latest poll appears to confirm that Biden has maintained — and solidified — his position as the clear Democratic frontrunner since he jumped into the 2020 race. Even before he entered the race, he has led the Democratic pack in nearly every early poll of the Democratic primary field. Unlike nearly all of his rivals except Sanders, Biden's spike in support has not corresponded with a rise in name recognition.

As a major figure in American politics since he was elected to the Senate in 1972, Biden has near-universal name recognition as the former second-in-command to a largely popular president. The majority of Democratic primary voters have a positive opinion of the former vice president: 76 percent view him favorably, while 15 percent view him unfavorably, according to the Morning Consult poll. Still, Biden's name ID doesn't mean he's unbeatable, as the large mass of candidates running below 10 percent in the polls still have plenty of time to grow their campaigns.

The latest Morning Consult survey was conducted between April 29 and May 5 among a national population of 15,770 likely Democratic primary voters. It has a margin of error of 1 percent.