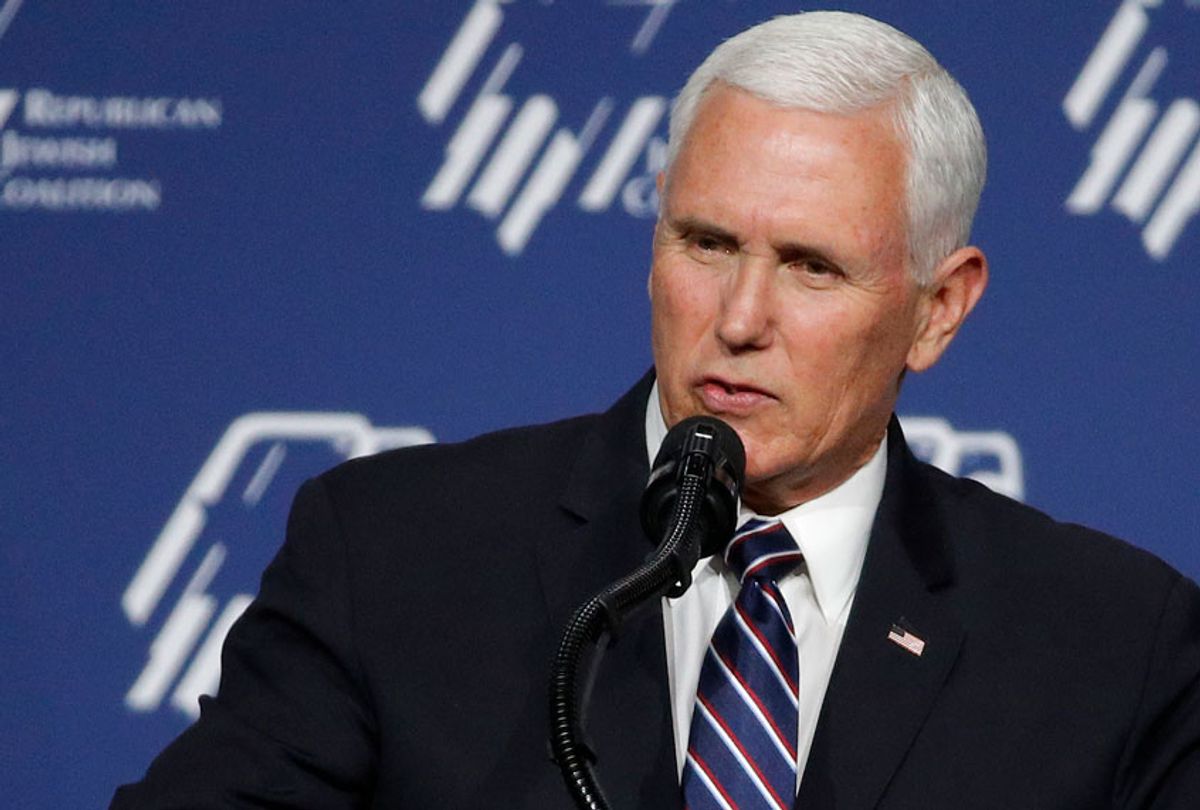 In a speech before the right-wing Federalist Society, Vice President Mike Pence complained about federal courts blocking the Trump administration’s policies from taking effect. He said President Trump would take the issue to the Supreme Court.

Pence told the crowd that federal judges who issue nationwide injunctions against Trump’s policies “prevent the executive branch from acting, compromising our national security by obstructing the lawful ability of the president to stop threats to the homeland where he sees them.”

Pence vowed that the administration would take their complaints to the Supreme Court.

“The Supreme Court of the United States must clarify that district judges can decide no more than the cases before them,” Pence said. “A Supreme Court justice has to convince four of his colleagues to uphold a nationwide injunction — but a single district court judge can issue one, effectively preventing the duly-elected president of the United States from fulfilling his constitutional duties. This judicial obstruction is unprecedented. In the days ahead, our administration will seek opportunities to put this question before the Supreme Court.”

The Trump administration previously tried to take up this issue before the Supreme Court when appealing an injunction against its travel ban. But the high court never ruled on the underlying issue because they upheld the ban in its entirety, the Associated Press reported.

Courts will often issue injunctions while a case plays out. Nationwide injunctions apply to everyone as opposed to injunctions that only apply to people who brought the lawsuit.

According to Pence, the Trump administration apparently wants the Supreme Court to bar lower courts from issuing nationwide injunctions — even if the administration's policies violate the law.

A White House official told AP that the administration would look for cases that could press the Supreme Court to take up the issue.

Pence’s remarks were echoed during a Wednesday Cabinet meeting at the White House, the AP also reported. Trump himself repeated his frequent attack on the courts during a rally in Florida Wednesday.

“Activist judges who issue nationwide injunctions based on their personal beliefs undermine democracy and threaten the rule of law,” Trump said.

Lower courts have repeatedly blocked Trump’s policies, like the travel ban and the ban on transgender service members, that were later upheld by the conservative majority on the Supreme Court.

“These injunctions are beginning to take a toll on the federal court system — preventing legal questions from percolating through the federal courts, encouraging forum shopping, and making every case a national emergency for the courts and for the executive branch,” Thomas wrote in a separate opinion that no other justice joined.