Richard Burr's mysterious game: Why is one Republican senator still pursuing the Trumps?

Is the cryptic Senate Intelligence Committee chair looking to play hero, Watergate-style? I wouldn't count on it 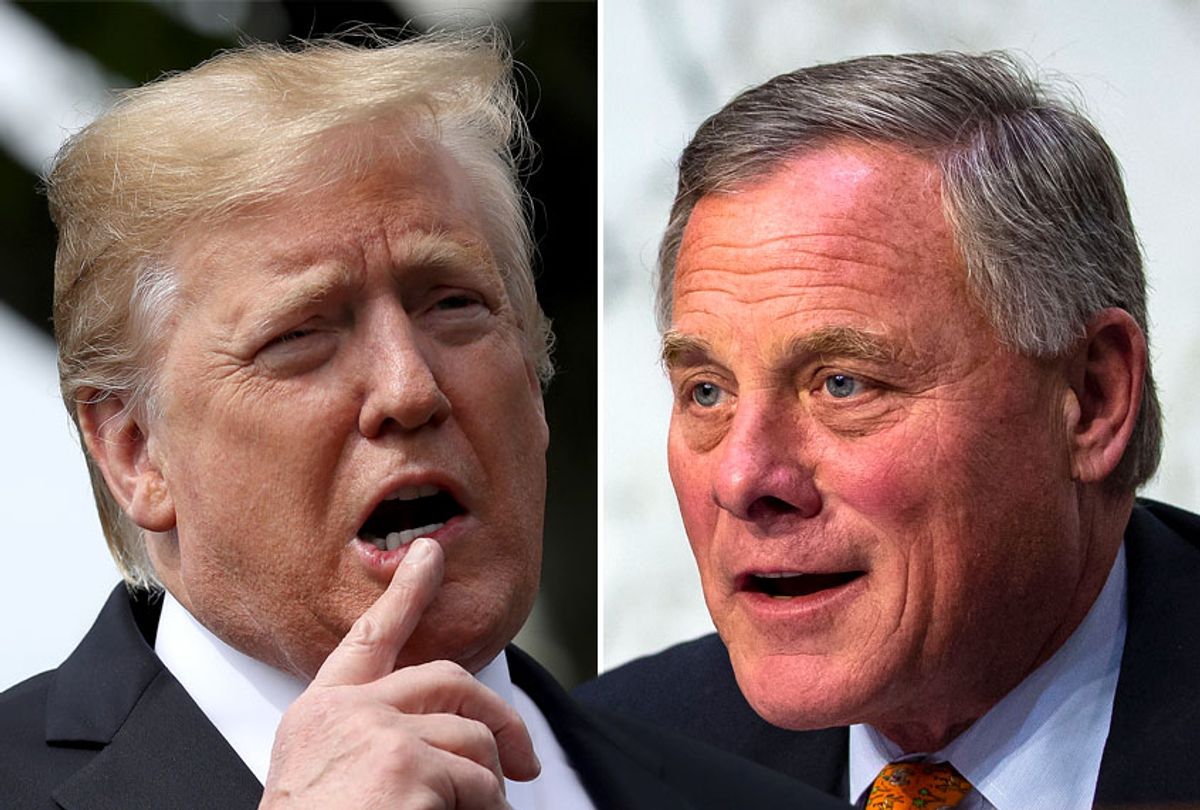 One day after the midterm elections in which the Republicans lost the House majority, President Trump once again sought to flip the script by firing his longtime nemesis, Attorney General Jeff Sessions. He announced the dismissal in an especially sour press conference, during which he berated all the losing Republicans for failing to tether themselves close enough to him, which he of course insisted sealed their defeat.

But firing Sessions didn't lift Trump's spirits as much as he might have hoped. He was reported to be depressed and upset because of the rumors that were flying all over town that his number one son, Donald Trump Jr., was about to be indicted by special counsel Robert Mueller. Vanity Fair reported:

In recent days, according to three sources, Don Jr. has been telling friends he is worried about being indicted as early as this week. One person close to Don Jr. speculated that Mueller could indict him for making false statements to Congress and the F.B.I. about whether he had told his father about the June 2016 Trump Tower meeting with Russians to gather “dirt” on Hillary Clinton.

It was already well known by this time that Junior had lied to the congressional committees, soft-pedaling his knowledge of the Trump Tower project and failing to divulge the information that he'd met with other emissaries of foreign countries about possibly help for the Trump campaign. So the notion that he was in Mueller's crosshairs as well wasn't exactly a surprise.

Mueller never indicted Junior, obviously. But despite Trump and his allies' insistence that the special counsel's report "cleared" him, it's not true. Mueller never interviewed Don Jr., and redactions in the report point strongly to the likely scenario that he was subpoenaed by the grand jury and took the Fifth. The general consensus is that Mueller concluded that Junior's collusion was so dumb that he couldn't possibly have been involved in a criminal conspiracy.

But Mueller isn't the only game in town. As it turns out, the Senate Intelligence Committee still wanted Don Jr. to come back and testify again before the senators. (He'd previously only spoken to the staff.) They asked him nicely but unlike all the others who'd testified under the same agreement, including his brother-in-law, Jared Kushner, Don Jr. apparently refused. So sometime between a month ago and a week ago (news reports differ on the timing) the committee issued a subpoena. When the news leaked on Wednesday, Trump Jr. and his allies completely lost their minds.

This hysterical statement was issued to the news media:

The "so-called 'Republican' Senator" described as "cowardly" would be Richard Burr of North Carolina, chair of the Intelligence Committee. That leak happened on the day after Senate Majority Leader Mitch McConnell had declared "case closed," which is probably not a coincidence. Someone on the committee likely thought it might be useful to have it out there that the only truly bipartisan Russia investigation on Capitol Hill was still in operation, making it clear that McConnell's words were only rhetorical.

Trump's allies raced to Junior's rescue, particularly those who are facing re-election in 2020, reportedly after being reminded that they might not want to anger the president and cause him to endorse a primary opponent against them. Following the intemperate words of that "source" close to Trump Jr. calling Burr a coward, other Republicans came forward to condemn their colleague — a highly unusual occurrence, especially within the GOP — and call for the committee investigation to be shut down.

It was quite a temper tantrum, joined by the president himself:

It's clear that Trump is only aware of the sunny Mueller Report Cliff Notes he sees on Fox News, so he probably unaware that Burr also acted as a back channel during the investigation, speaking to former White House counsel Don McGahn about whom the committee had interviewed. But Trump mentioned that Burr had said publicly that his committee had found no evidence of collusion and seemed confused since he had obviously considered Burr to be among his loyal henchmen.\

Burr is a strange figure in all this. He has gone out of his way to avoid appearing publicly with Trump, supposedly to avoid the appearance of a conflict even as he shared info with the White House and intervened with the press on Trump's behalf. He has managed to work congenially with Sen. Mark Warner of Virginia, the panel's ranking Democrat, and by all accounts the committee investigation itself has not been compromised.

Why Burr has decided to subpoena the president's son, if it's simply a mopping-up exercise, as other Republicans on the committee have implied, remains mysterious. Some people assume it's because Burr believes that lying to his committee under oath is wrong no matter what, and he wants to preserve the integrity of the process. Others think it's because this is his last term in the Senate and he's decided to take a stand. (Burr has said he will not run for re-election in 2022.)

It's tempting to believe that. Burr's back-channel activities with the White House are reminiscent of Sen. Howard Baker of Watergate fame, the Tennessee Republican known for his repeated question, "What did the president know and when did he know it?" It was later learned that Baker had secretly provided the Nixon White House with information about the Watergate committee's investigation; his question was designed to protect Richard Nixon, under the assumption that Nixon hadn't known anything about the criminal cover-up. When it could no longer be denied that Nixon knew everything, Baker changed sides and sealed his reputation as a man of integrity, even though the truth was much murkier than that.

There have been so many of these possible parallels between Republicans of the Watergate era and today, and none of them have panned out. I'm no longer willing to extend the possibility. That species of Republicans who are willing to do the right thing, however reluctantly, has gone extinct. I don't know why Burr has gone that extra mile, but I doubt that he intends to nail Donald Trump Jr. with a perjury rap or to expose the president's collusion with Russia. It may just be that Burr thought Don Jr. would end up complying and they could have a nice little sit-down to clear the air.  In any case, the likelihood of the Republican Senate sending a criminal referral to William Barr for Don Jr.'s lies under oath are about the same as the chances President Trump will join the Space Force for its first trip to the moon.

This would all have probably blown over if the Trump administration, and Trump's entire family as well, hadn't decided to stonewall all congressional requests, no matter what they are, in order to put on a show for the base and run out the clock on the myriad of outstanding legal issues. But Don Jr., not being the sharpest fellow of all time, didn't realize that stonewalling the Senate won't really work — since the Senate is run by Republicans, after all — and he ended up causing a huge mess inside Trump's own party. He's a real chip off the old block.